Ok, so I want to ask the community how they troubleshoot this.

Here is the problem. I load a vector that I want engraved. The UI shows the vector perfectly. When I go to engrave, I have a random line show up out of no where and ruin the entire piece. 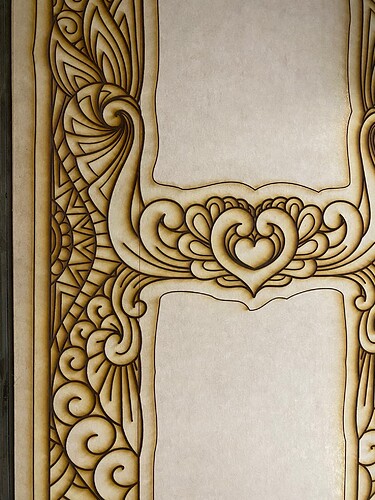 I sent support an email about this and their response was lacking to say the least. Basically they said the problem was with me and my file and not them. If that were the case, why does the UI render it perfectly fine? I work in IT and I can tell you at the companies that I worked for that would not be an acceptable response. A bug would be opened and prioritized.

Seeing how GF refuses to acknowledge the bug and puts the burden on the paying customer instead. How do you fix this? How do you prevent this before ruining GF materials? I mean these aren’t cheap materials and the subscription is not cheap either. I just don’t want to keep wasting money on material only to find out I ran into another ‘Feature’.

If either of the latter two you will need to dig into the paths and check for an errant path, it might be invisible as in not stroked, but the

will still laser it.

If you bought the file from someone and didn’t edit it then contact the seller to ask them for help.

In spite of how you feel right now, which is understandably frustrated, it is likely in your file and not a bug in the UI. If you’d care to attach (zip) your file here, I’m sure other folks would take a look at it and try to help you with this.

Sorry to say, but you have a stray node. The crazy thing is, sometimes it will process and engrave without the line.

There are lots of posts about this in the forum if your search random line or stray line.

Seeing how GF refuses to acknowledge the bug

Of course there may be something different at play here, but this is a well-known issue that is traced down to a problem node in the design.

I have used the same file three times. First time the line doesn’t show up and it is no where to be found in the actual file. I then proceeded to laser a nice neon acrylic and not that is ruined. Is there an issue with the cloud software slicing the file up?

Sometimes it has to do with how the Glowforge interprets a winding rule around a node, but it is always able to be fixed in the design software.

What is the source of the design? Often vectors come in fine when they are used for image display but tracing a vector with a laser is a different method and will have certain requirements.

Minimizing nodes and ensuring that they are not broken is just one of those things. I always test any design on some cheap material before I start messing with the good stuff.

GF is billed as a WYSIWYG device. What I see on the screen is a design that does not have the stray line. What I get in the end is. The fact that what the screen shows and what they GF actually does is the problem. If you are going to sell your product as a WYSIWYG, it should truly be WYSIWYG.

You say there are errant paths? How do I find these errant paths? The fact that this ‘isn’t a bug’ means there should be an explanation on how to find the offending items.

@dklgood I have looked for stray nodes but I don’t see a single one. The fact that you say sometimes it will draw the line and sometimes not indicates to me that this is a bug. Code is predictable. It is logic.

does it make this random line in other files? If it’s a UI Bug, then you would see it in other files. If you don’t, then it is the file, not the GF.

So are you saying it is a bug in the GF processing system?

Personally, based on other ‘features’ the UI has introduced, I am more inclined to say the bug is in the WYSIWYG UI system. It just isn’t showing what the machine is actually going to do.

You say it is the file but the same file is used to render the UI and the GF operation. The two do not match. This is a very simple QA task. If the screen does not match the output, there is a bug, It is just a question where the bug is.

I would 100% agree that there is a bug with the file if the UI output matched the GF output but it doesn’t. You get two different results from the two different systems with the same file.

It sounds like you have already made up your mind that it is a bug. Several people have asked you to share the zip file and maybe they can fix it for you. The community helped me fix one before. Give them a chance.

Very easy way to fix it…rasterize the design. (It can be very difficult to find errant points and open paths in a vector drawing.)

The Glowforge algorithm closes open paths and points when engraving in vector designs, and if there is a stray point in the design or a path that was not completely closed, that can happen. If the parts to be engraved are rasterized, it actually does become WYSIWYG. (Otherwise, the algorithm is going to interpret it by closing the open paths/points using the shortest distance between the two points.)

I’m not ‘hopping on’ any bandwagon and I don’t work for Glowforge. I am a fellow customer who learnt from scratch by myself how to control the machine.

At this point you are not giving any additional information that will allow anyone here to help you.

Do you expect someone here to write out instructions for you so you can jump down their throat and tell them that it’s the machine or the UI’s fault?

Do you expect them to write out instructions for all the different software options out there because you haven’t provided enough info as to which you are using?

No-one has time to help someone who doesn’t want to be helped and no-one will be inclined to reply with helpful information just to be either attacked or listen to further moaning.

I’ve had that same problem!
It’s not you. It’s the back-end processing server. It gets confused where there is too much complexity.

I have this small but complicated pattern for a button.
If I do 6 at a time, they each laser correctly.
If I copy the 6 and do 12, then the evil line-of-death appears.

Poof – no more evil line.
Keep in mind, “how complicated”? I haven’t worked that out yet. But you’re definitely seeing the “it’s too complicated” line bug.

It’s very simple. Never engrave a vector. Rasterize it and you’ll never see another line that I had to look closely for to figure out how it completely ruined the entire thing.

I am more inclined to say the bug is in the WYSIWYG UI system. It just isn’t showing what the machine is actually going to do.

You have a valid point here. Responses are going to be at cross purposes. Most folks want to assist with providing solutions to a problem. Fixing the file is the one where we have the most agency. Getting Glowforge to change how they process and display vectors is further out of reach.

It sometimes takes me a while to figure how what a person really wants and respond to that. Most of the time, I just am just rerponding to my own needs.