I was watching some videos on Tested, and Adam Savage is fond of using something called Trupan, which he calls a Light Density Fiberboard (though online it seems to be referred to as the confusing “Ultralight Medium Density Fiberboard”). Aside from the stuff being impossible to find suppliers for, I wondered if it was laser safe. I was able to track down the MSDS for it, but then I realized I didn’t know what things would be fine as long as we have a filter/vent and what was a no-no for other reasons (fire risk, corrosive fumes, non-filterable fumes, etc.)

Is there a list of red flags we should look out for when reading the MSDS for a prospective material? I know chlorine is a big one.

Trupan is just 1 brand of ultralight MDF. There are many companies that make and sell it. Lowe’s and most lumber yards will have it. This material is the same as regular MDF just not pressed as tight in manufacturing so what you get is a very light but not as strong piece of MDF due to the physical ammount of material being much less.

Gotcha. He suggested it didn’t have a formaldehyde binder in one of the videos, which I supposed would be a plus for laser safety, but the MSDS specifically mentions formaldehyde.

Trupan has the safety materials sheet listed on their site (here is a link ), and here is the gist: 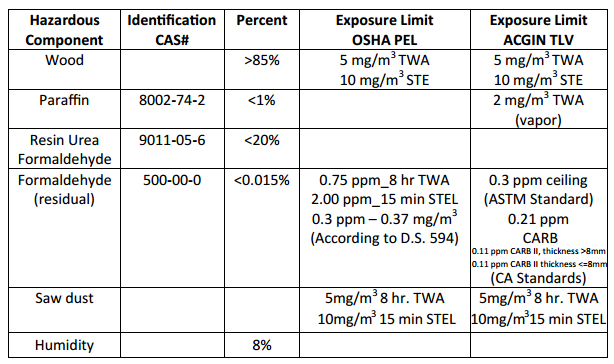 I am no expert, but after googling each of these components, the only one thats stands out is the Resin Urea Formaldehyde (which is common in most pressed woods like MDF) and from what I have read SO FAR, as long as you have good ventilation the amount of formaldehyde that is emitted during cutting shouldn’t be a problem. I would suggest researching further on your own for more information.

Not all MDF has the same level of Formaldehyde content, and there is increasing pressure from Europe and California on furniture companies to reduce or eliminate it to meet indoor air quality standards.

Note also that MDF can be really impenetrable depending on glue composition and density, so don’t spend much on it until you’ve tested it.

Did you ever try Trupan or find out anything more about how safe it is to laser?

I’m afraid not. I’ve just been using Draft Board instead.