I haven’t been getting timely responses from support (I know I already have a ticket open via email), and with the time of year and the fact that I’m about to have to start canceling or delaying orders which I really hate to do I wanted to check in on the forum and see if any other users could help narrow down my issue or know of any fixes. I got a refurbished unit because mine was having power issues. One of the main items I sell is engraved wooden items. I’m attaching a picture of the same file - on the far left is on my old laser. On the right is at various settings - first column top to bottom is proofgrade SD, next is old proofgrade SD which is what I always use on my old laser (1000/full/240 LPI), then same but with the fan on to make sure that wasn’t the issue (see my last post about the fan if you’re curious). Next column is 900/100/240, 900/100/340, then 600/100/340. It’s a mix of masked and unmasked, but they all have splotchy dark areas which are super fine lines of unengraved wood going the same direction as the laser. I thought about trying to defocus a bit, but I also have issues getting fine lines like the lines between the cherry blossom petals to show up at all, even if the main engrave pockets are much deeper/darker than on my old laser, which made me concerned that it’s not focused perfectly anyways, although I’m not as sure about what is causing that. In the video (I hope it uploads), you should be able to see the super thin flakes of unengraved strips in the engrave section - they bend under my fingernail and will break off leaving light spots if I press harder. 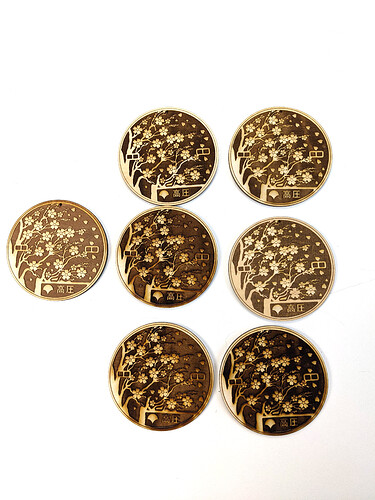 This isn’t a huge issue for me but I wanted to point it out in case it is related - but when I run the normal routine of placing my designs and pressing print, where it focuses as part of the print planning, the engraves and scores look relatively like they’re in focus. If I tell it to ‘set focus’ first, even in the same place, it adjusts the camera image more than as part of the normal routine and my scores and engraves come out looking out of focus, even on smaller items where I don’t have the engrave issue I talk about at the beginning.

Try bumping your power to Full. (Not sure that’s it, but worth a shot.)

Full power on this unit is really hot. The engraves on full obliterate the material and it turns out super dark even at max speed.

Hmmmn. Might need to lower your LPI too if it’s cutting too deeply. What kind of material are you cutting?

It’s medium proofgrade maple ply. Are you suggesting that lowering the LPI would reduce the thickness of the unengraved lines between laser passes? I can already see some slight pixelation/jags around curves if I look super closely and I’d worry that reducing LPI would exagerate those as well.

FWIW, that one on my old laser on the left is from the same sheet of material as all the ones on the right.

It’s a balancing act. Higher LPI cuts “deeper” and tends to char more, because the laser beam is going over areas where the beam has already passed one or more times.

Given the width of the beam itself, you’ll generally get one pass at around 195-225 LPI. That will lighten it up and not cut as deeply, so you can maybe apply full power to it and take out those stringers.

Given the placement of the stringers, in little patches, it might be an irregularity in the material - maybe a little patch of denser glue inside, and those are a pain to try to deal with. Full power might cut through them.

Well, okay. Hopefully support can find it for you. (Got to run hubs to an appointment.)