I’m in the middle of printing the retro boombox for the first time after purchase. I’ve printed out the first half now I don’t know how to switch to the second half of the print which is the very front of the boombox. How do I do this? And how do i customize the mixtape on the front panel of the boombox?

icon at the top of the screen in the project window, you’ll get step by step instructions.

And how do i customize the mixtape on the front panel of the boombox?

I’ve never used a pre-populated project before, except for the first print ruler, but I would think the add artwork button would be part of the solution if one exists. If the current mixtape is an engrave separate from any cuts, you could set it to ignore and then place your artwork over the top of it. If you’re using Inkscape, remember to do a Path->Object to Path on your text so it will engrave.

I did, but it doesn’t explain things very well. Like it doesn’t tell you that after you do the first set of prints, you have to upload another file to do the face print of the boombox. And it still doesn’t explain how to personalize the mixtape on the front.

And it still doesn’t explain how to personalize the mixtape on the front.

They don’t allow the downloading of the files and without that there is going to be no non-kludgy way to do that if it can be done. Depends on how they assembled the engrave file.

I’ve made several of those (bought the bulk package).

There should be a separate file download in your Dashboard for the front panel. Exit back out to the Dashboard (click on the Glowforge logo) and select that one for printing in your plywood of choice. 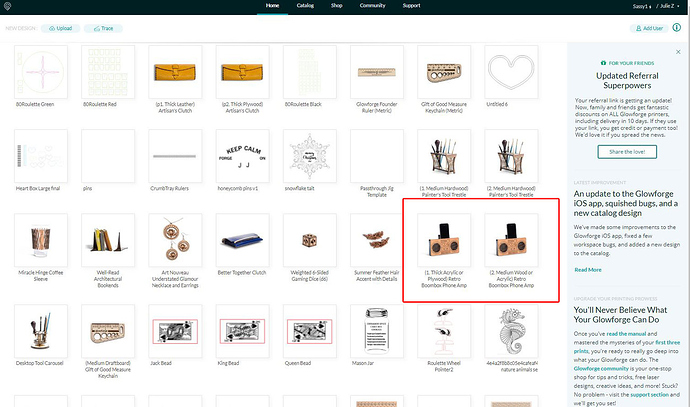 To add your text to the Boom Box:

Create the Name in an outside design program on a white background. (Anything from Microsoft Word, Photoshop, Illustrator, etc.)

Save the name file as either a JPG, a PNG, or a PDF file type, to your desktop. (Any kind will work.)

Then just open the front panel file from the Dashboard, drag the name file over on top of it and let go. Move it where you need it and resize it to fit.

Thanks for the explanation, Jules. That’s right!