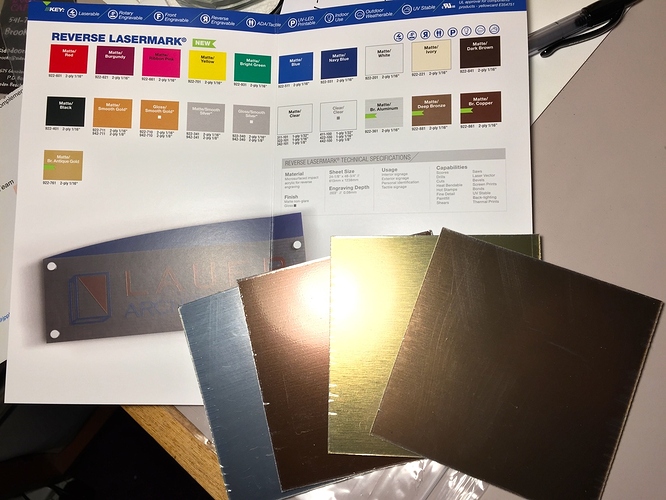 Did a few small tests last night. It’s only 1/16" thick and has a thin, clear plastic film on both sides. The ‘gray’ side with the text on it is the side to be lasered, however the pamphlet that came with it said it could also be lasered directly on the front, so I tried both ways. Because I had to figure out my own settings, it could be lacking in that regard, but for the most part, it looks pretty nice. The reverse lasering definitely produced the more superior result and looks good on it’s own, but could also be used in backlit situations.

Two below were reverse lasered. 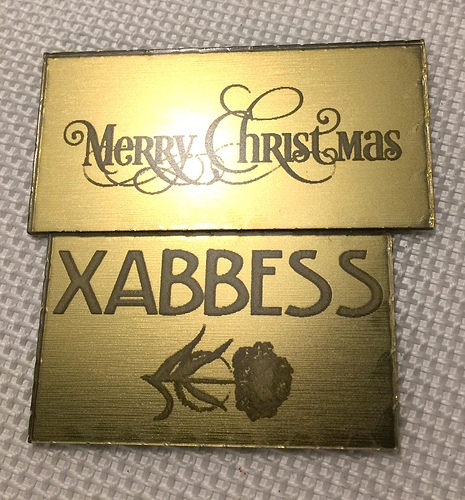 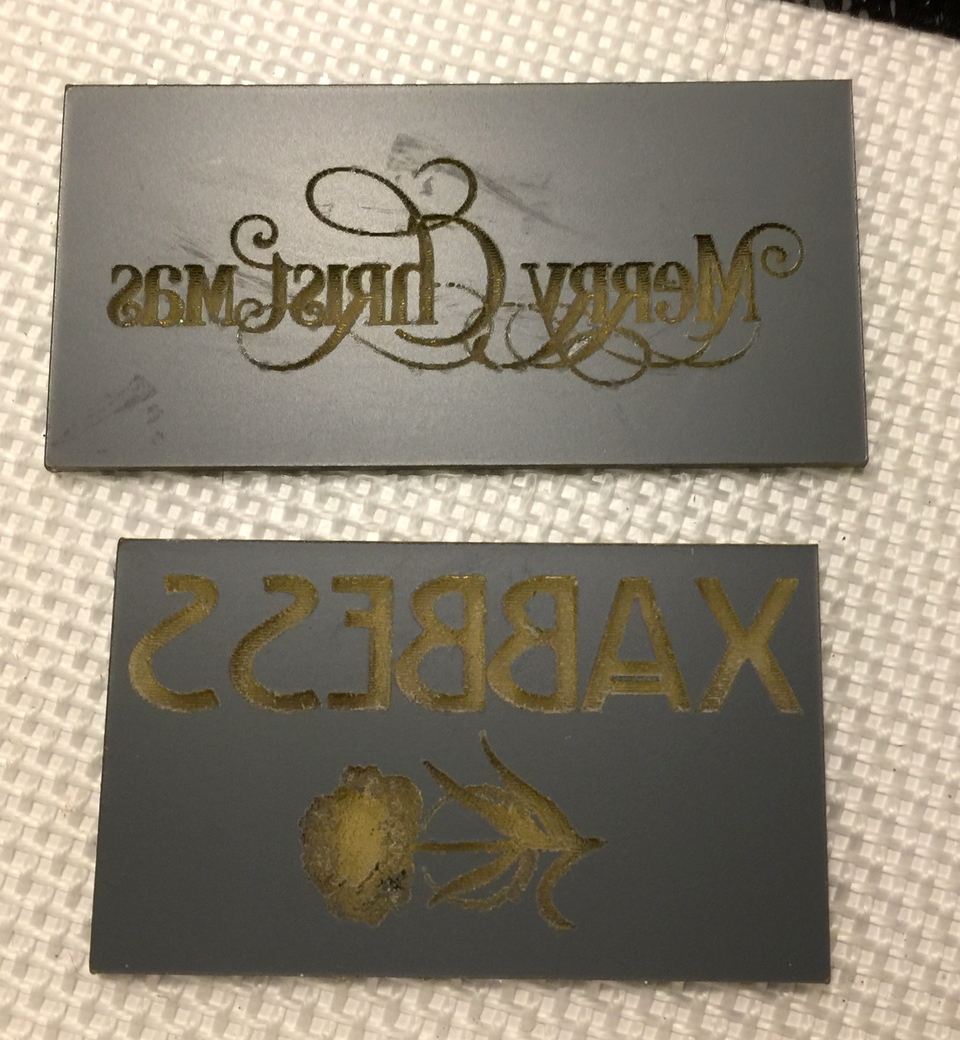 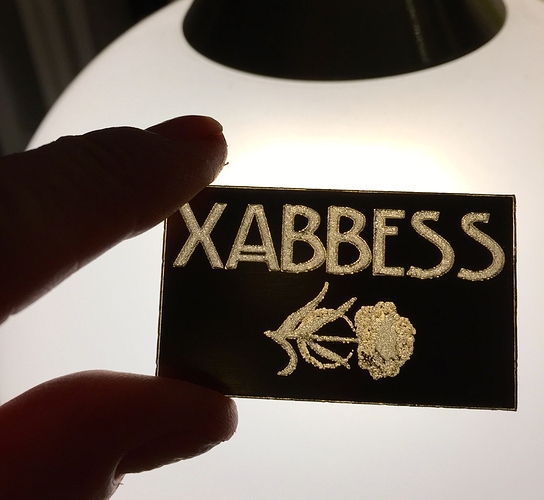 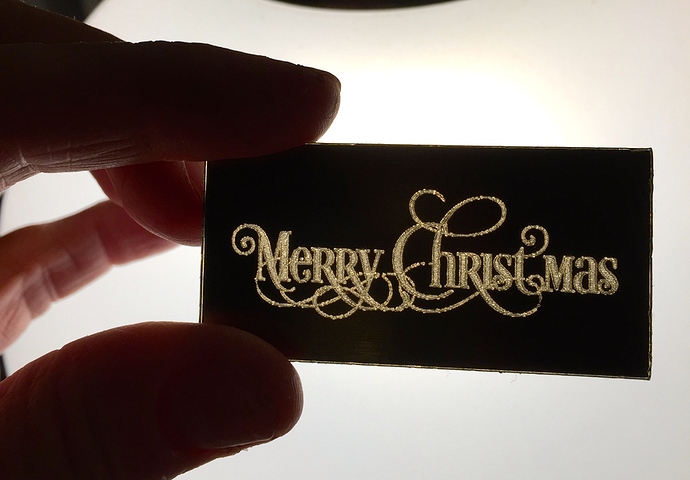 This last one was engraved on the front. There’s sort of a weird holographic vibe to it when you look at it, but in general, it does not look very good…and sorry, it’s a bad photo. 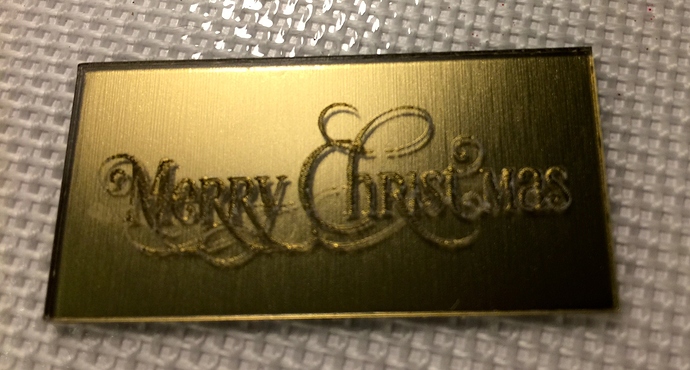 I personally can’t think of many uses for this for any of my own ideas, but some of you out there might like it.

I use this stuff alot…great for back lit signs.

Sweeeet! I’d gotten some samples from them (which I still haven’t tested) but there wasn’t any of the metallic. Love the bling thing!

A good way to use this stuff is to do it slightly out of focus so the acrylic is more clear after you engrave then fill with paint.

I was just thinking how I haven’t seen much new from you lately!

Pretty! Thanks for testing it for us!

So I guess I have to ask…is THAT the quality I should be expecting from an engrave with my Glowforge???

Cause…that’s NO BUENO. It’s not smooth at all. All the detail in the rose is lost, and it’s just a bunch of bumps. Like it’s gritty.

The glowforge is not the problem. It is some combination of the source file, material and settings. It is my understanding that with this type of material especially, perfect settings are a must for superior results.

I may not be helping here, but the image below started life as a low quality jpeg, modified by me in Microsoft Paint, traced to bitmap in Inkscape and then shrunk to 7mm wide by a little more than 8 mm tall. As it was engraving last night, I just kept thinking wow this thing can do detail. It super-accurately reproduced my could-be-much-better artwork. Note that this photo was cut out of a much larger photo by a poor photographer: in real life it looks much clearer and crisper. 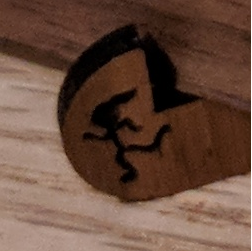 It looks like power was up too high…melty sides and all…Rowmark actually has suggested settings. When I get to my office I can post setting that I use all the time for my machine (ULS 35 wt)…but it will translate different to the Glowforge.

Thanks. I’ve been working really hard on designing and have been learning a lot. Just figured out how to successfully design a tabbed and slotted piece, which for me has been quite the learning experience. I’ll have more stuff to share, but it’s beginning to take me longer because I’m using my own designs more instead of those from others who have been generous enough to share. It’s sure all fun though…and I find myself excited to begin a ‘session’ with Glowria.

NO! As I mentioned, I had to figure out my own settings and I agree…not good looking. But, since this is a material I will perhaps seldom, if never really use, I didn’t want to spend a lot of time doing tests for good settings. I just wanted to show the material and the possibilities to anyone else who might be interested. So again…no…don’t use this as a judge of what the Glowforge can do, please.

Oh ok! Thanks for all the info guys, I nearly had a stroke of buyers remorse. LOL

You and I CLEARLY have differing opinions on what is acceptable, and what is not.

He was joking. That’s why he replied using such a blocky font. Of course, if you got that and are just running with the joke, then just forget I said anything.

Seems I can’t just reply with a smiley. Boooo

The sarcasm in your font choice was clearly not lost on me…pretty funny!

You make such pretty things.

can you send the settings you used so I can experiment. I payed for mine and know what I would like to do with it but am failing miserablhy to get any kind of decent result. it would be much appreciated.

I have deep bronze ACrylic on black and need some guidance before I ruin it all. Which side do I start on, I was hoping for the maetallic but will happily change that to get some work done. I was hoping someone would have some settings and advice. thanks.