Safe for laser to miss material?

I bought some blank pre-cut picture frames with a thick border and I was thinking of doing a “full bleed” engrave effect on them.

Since even the best alignment is not perfect, I was thinking of making my engrave image slightly larger than the frame. Of course, this would cause the laser to sometimes miss the material and fire directly into the crumb tray.

Is that a safe plan? What are the consequences of the laser not hitting a material?

There may be the chance for laser head damage caused by a straight back reflection into the laser head, but I cannot confirm this from any documentation. During the cutting process, the ablation of the material absorbs energy. Any energy not absorbed can reflect back into the material and will cause burns on the underside of the material.

If you have the crumb tray in place it won’t hurt anything. If you don’t have it in place, you want to cover up the metal in the bottom of the machine with material of some sort.

As far I know it is not a problem for the laser to hit something else. The focus should be wide, the crumb tray is metal and shouldn’t be effected by the laser anyway.

One trick I use to help align items for engraving, I add an outline, using a different color, of the material I will be working with in the SVG file. When I load up the file into the glowforge, I score that outline on paper, ignoring everything else. When it’s done, I place the material I’m working with in the scored marks on the paper. Ignore the outline now, and select the appropriate settings for everything else.

Oooh, that’s clever. What settings do you use to score the paper so it doesn’t burn? And is it particularly thick paper?

The only paper I have that seems to work is 100lb card stock. The settings I have for that is 500s/10p. You are just scoring. Not cutting. So you are just looking to leave a mark on the paper.

Oh and don’t forget the secure the paper. Don’t want it moving while you score it, and placing the material on it.

If you don’t have it in place, you want to cover up the metal in the bottom of the machine with material of some sort.

I have a VERY big tile that I use specifically for that purpose.

That must weigh a ton! (I just use a cheap sheet of thin baltic birch.)

It’s not much of a chance, but they do recommend not firing directly into the metal - who knows, it might reflect out of the port or something.

I got the tile for $.25 at ReStore, specifically picked it to be a laser backstop when the crumb tray is out. It does weigh a few pounds, yes.

They do specifically state not to allow the laser to hit the bottom. It may be minimal risk, but I’d rather no risk, so I avoid it.

It’s not much of a chance, but they do recommend not firing directly into the metal - who knows, it might reflect out of the port or something.

I used to bulls-eye Womp Rats in my T-16. I’m sure this isn’t much harder.

Use the force, Luke.

My base shield tile. 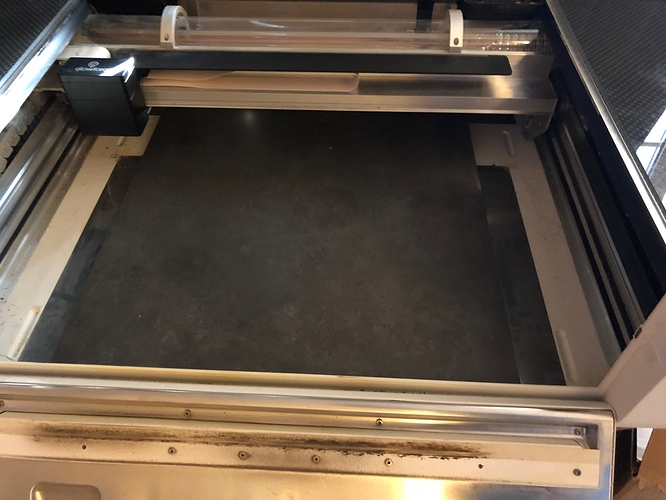 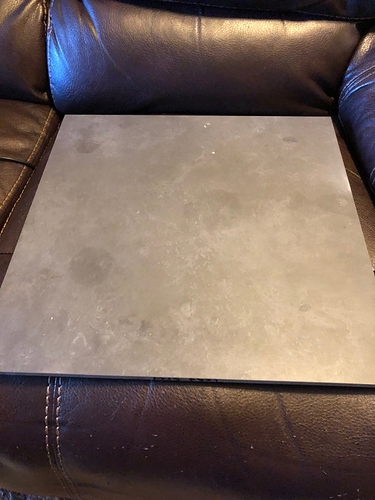 I could probably ablate through that…with a few dozen months of constant effort…and a file.

I’m curious to see if this goes unreprimanded, as it contradicts an official recommendation.

It’s no problem to have the laser strike the crumb tray when it is properly installed. If the crumb tray is removed, use extreme caution to ensure that the laser only strikes laser-compatible material, and does not touch the metal bottom of the unit which could cause a reflection and damage the unit.

6 Likes
Question: Are there other "unsafe" materials besides green-flame chlorine, what about reflective metals?
Pennies?
Rita closed November 29, 2017, 6:01am #19