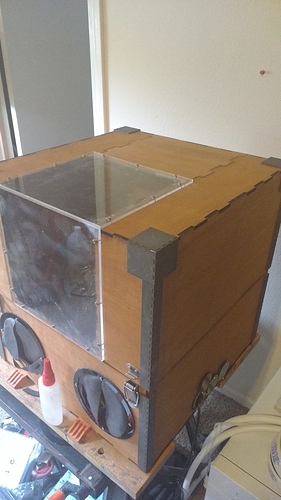 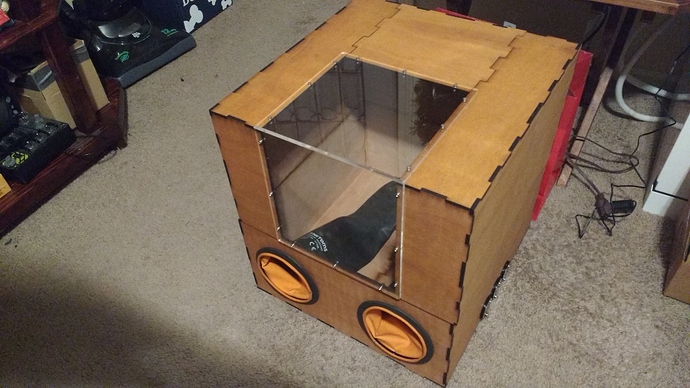 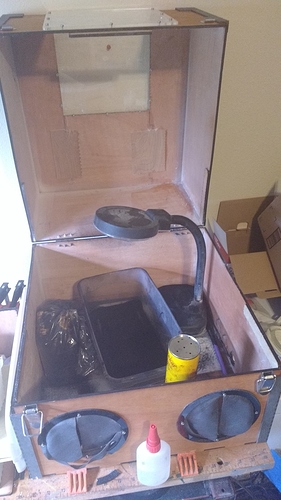 This is a small cabinet for doing dirty work in a space not really suited for it. It was made using 5 mm underlayment and 3mm baltic birch. Then a few bits are in acrylic.

There are 3 side ports that are big enough to take a 2" vacuum hose and also serve as pass throughs for any kind of electric stuff that I want in there like lights.

I also glued it using CA glue and sealed the inside with silicone culking. The exterior is just stained.

Very nice! That belongs in the Practical Applications thread!

What a cool build! I really like the incorporation of gloves. Add some LED lights and a nitrogen purge, and you’ve got a pretty decent inert atmosphere box.

Also note, that I ended up replacing the gloves with just leather covers as they were pretty hard to use. I still have them and it is just a matter of screwing on the glove mount, so if I have to handle something I really do not want on my skin, I have it for the future.

Also, for anyone who is wondering. That is flocking supplies inside the box. I will be posting up some of my testing with flocking in another post!

Very cool. You could also use bristles, if the whole thing is under negative pressure it shouldn’t let anything escape. As for the gloves, your flaps or whatever you settle on plus nitrile gloves should give you protection and good tactile feedback.

You’re onto a good idea here for sure. Any thoughts on what to do when paint overspray gets on the window?

I do not have a great solution for that yet. I have set it up so I can just replace the window if it gets too bad.

I have played around with a couple of simple solutions like putting a little bit of oil on the inside of the clear acrylic. I also played with a little bit a plastic wrap. I was not really happy with either though :-/

Great project. Makes me want to build a fume hood.

So, for the issue of getting paint and stuff on the window, what has been working ok so far has been to just put some plastic wrap on the inside. When it gets dirty, I just peel it off and replace it. It is working ok so far, though it is a little screwy to install.