Same here. Only saved setting showing is the last one saved.

My ‘engrave’ operation is saved… same art, but the ‘cut’ operation is missing any settings at all. This is true for multiple art files that I ran, all on the same material.

I had noticed settings are saved until I ignored an operation, then I had to re-enter the settings. That was about a month ago, maybe it has changed.

It’s 8 different files where the settings were the same and they are all missing. It’s the cut operation, and I wouldn’t have ignored it after the fact. It was a two step (score then cut) …

If possible, could you please send me a screenshot of what you see in the Glowforge app when you look at the settings for the Cut operation, along with a description of what you expect to see instead? Make sure to include the rulers in your screenshot and show as much of the bed as possible

To take a screenshot:

Reply with the screenshot and details, and we’ll be happy to take a look.

In the three attached examples, (there are a total of 8 files like this, but it’s all the same… same settings originally, same issue now), I used a red arrow to show the missing settings, and a green arrow to show some of the settings were saved.

In all 8 files, I used the exact same settings. The green were all a manual score. The red were all a manual cut. They were all on the same .08 material. They were all run at least two times (as I have at least two copies of each one…) and the settings were save in between runs. I expected them to be there to re-make again. When I went to remake one, the settings were missing. Odd, I thought, but no matter… I’ll go look at one of the other images and grab the settings from there… but that step/operation/setting is missing consistently from ALL the images I used it on. 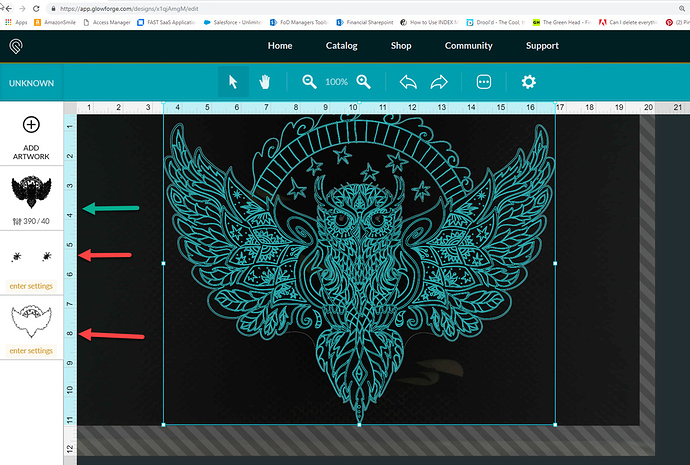 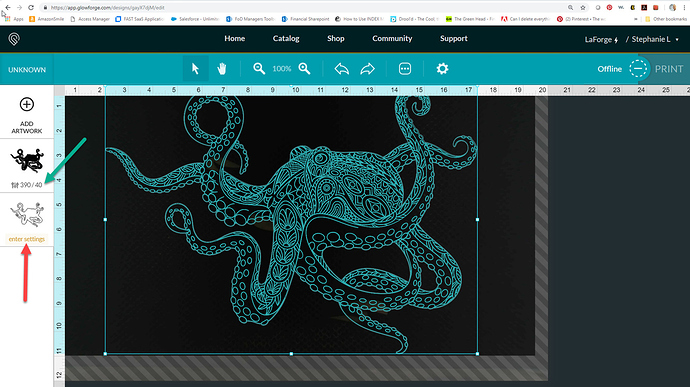 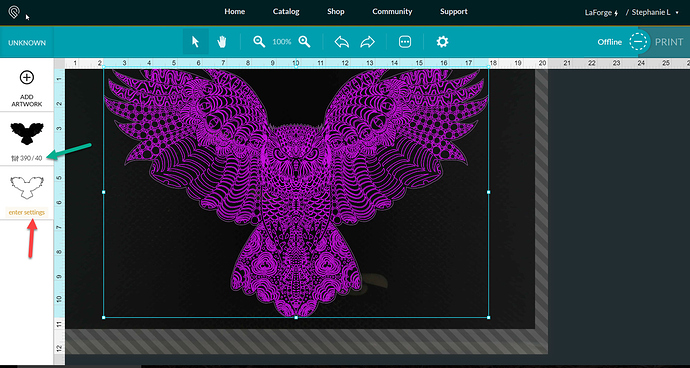 I’ve got no ideas about your missing settings, but the artwork is beautiful!

I’d love to take credit for it, but it’s just licensed art from Adobe Stock.

My ‘contribution’ is getting it ready to cut/engrave and finding things to do with it.

Did you enter the Unknown Materials thickness? I’ve noticed for Manually auto-saved settings in the past, they tend to show up when you are using the exact same thickness material that you used before, but will reset to zero power and fastest speed if the thickness is not entered or is changed. (That’s a safety feature to keep you from ruining material.)*

*(And as always, since the status quo changes periodically…I have no idea if it still works that way or not. I do remember seeing and commenting on it though in the past, so it’s something to check.)

All mine have been wiped out as well. I was depending on the settings I had in the saved files to use for other projects, and when I went in to several of them, they were all blank. This is for PG materials as well, where I had tuned their settings to work as I needed them to (i.e. etching into leather with masking in-place)…

Guys, everyone needs to be keeping a backup copy of settings information on a separate spreadsheet of some kind for now. They can get wiped out accidentally when changes are made to the interface and software, or if they have to roll the software back for some reason.

when changes are made to the interface and software

I imagine that can happen. But is that what happened? It sounds like you’re saying the save feature simply doesn’t work right now and we should wait until they get it working properly. Did they say something somewhere?

Nope. As far as I know, nothing has changed. That statement comes from a few years of sad experience Beta testing other machines.

As far as I know, nothing has changed.

Okay, cool. So we can presume that they make backups of their data like everybody else does and if they accidentally delete all of the settings they can simply restore them. And I guess we can also presume that there’s some issue happening right now with it that will eventually be resolved.

But you know what they say about those who presume… They make a pres out of… no, I guess not.

ROFL! Thanks…it’s the result of many an Oh, shit! moment.

And yes, they can probably eventually restore them…but we have no idea how long the fix is going to take, and I’ve seen it run up to a month or more, if the software is complex. This is some of the most complex software I’ve ever seen…it might take a very long time.

It’s just a good insurance policy while software is being modified behind the scenes. I haven’t even set up a saved setting yet.

I haven’t even set up a saved setting yet.

Funny, neither have I. When it was first announced (or discovered, that is), I was considering just running down my spreadsheet and creating material setting for everything just to “get 'er done.” Now I’m glad I didn’t.

Sounds like this is more like part of the autosave function releasing manual settings rather than the custom settings profiles that were recently released.

Sounds like this is more like part of the autosave function releasing manual settings rather than the custom settings profiles that were recently released.

So, yes… I did have a material thickness in there of .08.

I did have these saved (in a post I made about the Canson Art Board).

I am still wondering why the Score Setting saved, but the Cut setting did not. I could understand why ALL settings reset… But this was just the score operation…

If GF did some sort of Score calibration update, I could understand that too… but I haven’t found anything that says that’s the case.