I just saw this advertisement for the Glowforge and it shows doing a flask. It seems to me if GF is going to advertise for engraving these flasks, they’d also provide a link to where we can buy them, and any tips or “gotcha” when doing a flask such as this…

The biggest “gotcha” that I can think of is making sure that it will fit under the head, and that it’s some sort of anodized or painted metal rather than coated with something else; in which case, you’d want to verify its laser safe.

There’s a discussion and a purchase link or two on this post (searched for “engraving flask”): Facebook ad w/ the flasks

Are you just making an observation and complaining that GF doesn’t do these things or looking for where to get the flasks etc?

there are plenty of examples of it actually doing them (engraving flasks) here if you search. i think it’s safe to say that if it fits and either has a coating you can engrave off or you use ceramark or the like, you can definitely do it.

Engraving flasks Beyond the Manual

[20180915_214646] Ok, technically I just engraved away the paint, but these came out pretty nicely. I used the iPhone 7 material settings then adjusted the material height. Took 6 minutes at 700/100/270. Using vectors is great because crisp lines show up even at a “lower” dpi. Here are the flasks in the picture I had to remove the crumb tray and then prop these up on 2 sheets of scrap 1/8" material to get it to where the laser would be able to hit it well. There are 2 great tutorials in…

Another flask Beyond the Manual

Saw where someone was messing with flasks last week and decided to try. Flask is powder coated stainless steel. I think I will try a polish to see if I can get the engrave to shine a little more. [image]

Do you want a source for macaroons too?

Just like any company, they are going to show as much as they can to attract customers. You can’t reasonably expect them to give you a source for every little thing they show.

They go on and on about only supporting proofgrade materials, then advertise using something that is not proofgrade… so yeah, if they’re going to advertise it, then it should be usable and should provide sources for getting them, or offer them as an official supported item.

Imagine someone saw that ad, and that’s the reason they decided to get the GF… only to find out, oh that’s not supported officially and are on your own for figuring it out… Lame.

Imagine a world where marketing didn’t exist, and ads only showed exactly what products were guaranteed to do

and then wake up

so yeah, if they’re going to advertise it, then it should be usable and should provide sources for getting them, or offer them as an official supported item.

i agree that it should be usable. and it is.

should they provide sources? meh, this isn’t necessarily what a laser company does.

settings? i’ll agree with you that their settings being only for PG is a little lame. most other laser companies give some sort of generic DB of settings that make a good starting point for a bunch of different basic materials. this is a major failing on their part that gets blamed on the FNLs.

that said, i wouldn’t expect powder coated/painted flasks to be one of those materials. 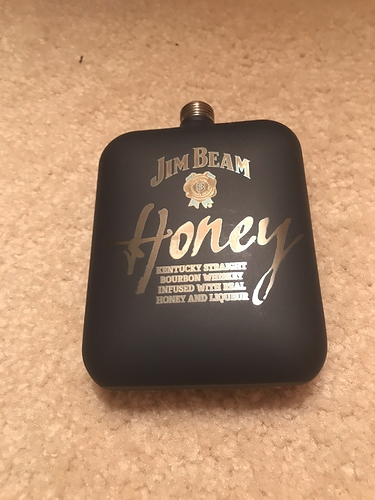 I did this flask a couple of days ago. Removed the crumb tray, supported the flask & used some small wood pieces along the sides to keep it from rolling.

Ran the laser at Full power/500 & 440 lines. (I guessed) It took several passes to get the powdercoat off & leave a engraving I liked. Picture doesn’t show off the color variations in the metal.

i mean, THAT’S a parallel analogy if i’ve ever seen one. +1 for really strong rhetoric tho.

it’s not like the laser cutter won’t cut or engrave at all.

The Glowforge is advertised as a laser cutter/printer/engraver…and it does do those things. Doesn’t quite equate to a flying car that doesn’t fly.

They offer support for their machine, and the materials that they sell.

As for not supplying the material source or Proofgrade settings for it - why would they?

As far as I’m concerned, it’s a step forward in the marketing, because there is a huge misconception out there that only Proofgrade materials can be used.

Except a customer who’s not on the net as much, doesn’t browse these forums all the time will try to do a flask, and get something wrong. They’ll create a support ticket, and the response will be “Well you did a flask, it’s not supported, so too bad for you…” Even though they advertise it with doing a flask.

Except (usually long before that) they’ll get a dozen responses from people on the forum saying “try this” “do this” “I got mine from here” so by the time they get the “I’m sorry we can’t help on non-PG, but it looks like you’ve gotten your question answered” they won’t care!

a customer who’s not on the net as much

I think given the way GF has chosen to do their marketing, the only customers they’re really likely to have are ones who are online a lot.

Aww, OK. I think you spelled, “Does anyone know where to get powered coated flasks and what setting would work” wrong.

The part about them providing links to everything they show is just silly and unreasonable. It would be like expecting Maytag to provide links for all the food they show in their range commercial. GF can’t possibly endorse outside material that they have zero quality control over and I wouldn’t want them to as it would be a form of endorsement. Most people know how to find their own cardboard, chocolate, flasks, clothing etc. and it would be rare to not get help when asking for settings either here or on FB.

I think you spelled

You quack me up!