Scanning Issues again… with others I’m sure.

What frustrates me about this is that we are all having the same issue. Which would implicate that there is a fundamental flaw in the design of the laser no? Meanwhile it feels like Glowforge is making money off this “Issue” by selling a cable that probably cost them 4$ to manufacture and inflated shipping. The problem isn’t the money it’s the concept.

A normal company should see a flaw in their design and offer to fix it or recall in the form of sending out the fixed faulty part. However. They’re charging for a part they’re probably aware will become faulty and fail.

The other issue is why it feels like to me, that the one year warranty to me sounded like a cover-up for a lack of confidence in their product. “We know the machines will start breaking down over time even if we branded the ‘Pro’ version as a production model. So to make some more money we’ll go ahead and start charging them as these parts not made for production.” - Probably in a Glowforge design meeting sometime in the past.

Also why are there SOOO MANY people having this issue? It’s a flaw. And they won’t accept it and ship us out the part that needs replaced.

I highly doubt all these people have the issues and Jules post albeit helpful is not fixing other issues.

People will blame me, “Oh, you’re internet failed and therefore caused it to bug out” Well why wasn’t that the issue the last 3 months it’s been in the same spot for?

Glowforge FIX YOUR FAULTY CABLES AT YOUR EXPENSE!

we are all having the same issue.

Oi, Go ahead and type in “Scanning” on the Search bar… That’s quite the load.
Don’t worry I was like you defending Glowforge, but then I wasnt.

Not defending anything. There are several weak points in the design. This is true of almost every manufactured product, I bought a 3d Printer to make better designed parts for a dozen products I have that have one or more object killing design flaws, but I am having those problems with the 3D printer!

I was only pointing out that “We” are not all having that issue and even those who have an “ever scanning” issue do not all have the same cause. I might agree that if it were not for scam and fraud we might not have much of an economy at all but my experience with Glowforge ranks them far above average in honorable dealing with others.

the one year warranty to me sounded like a cover-up for a lack of confidence in their product.

SOOO MANY people having this issue?

we are all having the same issue.

And exactly how many is that out of the thousands of machines out there?

Although it may seem like SOOO many people are having this issue, that is not true. Out of the 15,000 + units that have been shipped out, the numbers are small.

fundamental flaw in the design of the laser

No…not a fundamental flaw. I’m still enjoying mine that is closing in on 3 years without issue.

You are making a lot of unwarranted and false assumptions and flinging out inflammatory words like scam and coverup without much thought. Granted…there have been some issues with failing parts, but that can happen with most anything.

I think your post is prone to a bit of drama and a lot of hyperbole, but I don’t disagree with your underlying concern. If there is a part that is breaking down regularly, especially on newer machines, there could definitely be a quality issue. In that case, I do think GF should replace those. Typically they are as the machines are often under warranty.

The scanning issue isn’t always due to the black cable. It can be other things, like WiFi signals, etc. There is also the issue of the broken wheels, which I think is a bigger one, as it’s happening in brand new machines. It’s clear that this is a supply problem, and not normal wear and tear. Older machines aren’t seeing the same level of breakage.

The whole point of a warranty period is to deal with manufacturer’s defects. GF is honoring that. Beyond, there becomes the question of whether the cable is a flaw, or a part that will need to be replaced due to wear. They have made some changes to the design, so it may be that this works itself out over the next few months. I think GF will need to streamline the process for getting these sorts of parts, though. That seems like the real issue right now.

…we are all having the same issue. Which would implicate that there is a fundamental flaw in the design of the laser no?

The scanning issue isn’t always due to the black cable. It can be other things, like WiFi signals, etc.

Meanwhile it feels like Glowforge is making money off this “Issue” by selling a cable that probably cost them 4$ to manufacture and inflated shipping.

Ah, the evil plan to make a mountain of money with replacement cables for out-of-warranty units. Golly, how did I not see this before now? Oi vey!

Edited: As you will no doubt discover, “scam” is a hot-button word for the community.

Anyway, good luck and I hope your issue is resolved soon!

I’m sorry that your unit has gotten stuck on scanning and for the trouble and frustration this caused. I extracted the logs from your unit to investigate the issue for you.

While it looks like your unit has recently been able to connect and print, I went back and located the point in time when it was getting stuck. I was able to verify that the issue was not related to your Wi-Fi connection and may instead be related to the lid cable as you suggested.

Will you please do the following to check the lid cable’s connections and share photos of the areas circled in red? 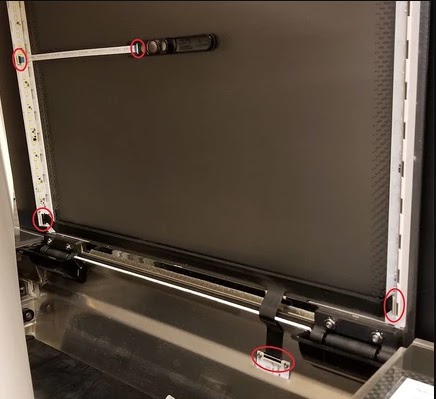 If you’d prefer to send us the photos via email, you can send them to my attention at support@glowforge.com. If we find that there’s an issue with the cable, I’ll be happy to work with you to coordinate getting you a replacement.

Thanks Ivan. Got a hold of a Glowforge Rep. They’re helping me out with the issue.

However, I still think there’s an issue with how parts like these are handled. With something an irregular issue amongst several units I think it’s annoying that people who waited for years since the crowdfund have just gotten over the hump of Waiting for Production vs Owning what was Promised to still have it operate with such issues.

The whole reason people waited 2+ years for theirs from the day the crowdfund ended was due to delays to get us the best product they can get. Well minor things were missed (As are always the case, yes Apple is known for these kinds of issues especially when they charge hundreds of dollars for a very simple and cheap fix) as I just think these things need to be brought up and taken care of.

Thank you for the update. I’ve passed your feedback along to our team.

I’m glad to hear that you’ve been in touch with my colleagues via email and that we’re getting a replacement part out to you! Since this is being taken care of via email, I’m going to close this thread.