So it’s a strange way to announce I have changed jobs, but I did; I lost my research funding, which then caused the medical center to lay off me and my entire team. luckily doctors who can write enterprise level application code don’t grow on trees, so it actually took me 4 days to find a new position. I am now the deputy chief medical officer for technology at IBM Watson Health in Cambridge MA. As it turns out a couple of blocks from @joe (we’re going to do some GF community coffee or lunch soon, but since it’s day 4 for me, still figuring stuff out). Anyway, had to make something for my desk when I started and since IBM’s Quantum computing effort is under our group, figured my own Schrödinger’s cat was the best. I heard the way the IBM Q machine works is inside each of those cryogenic canisters the cat will meow out the answer in binary coded decimal… The box is

maple ply, while the cat is Matterhackers gold PLA on my Prusa i3mk3. The model is a voronoi of a cat model available on thingiverse titled “Laser Cat” 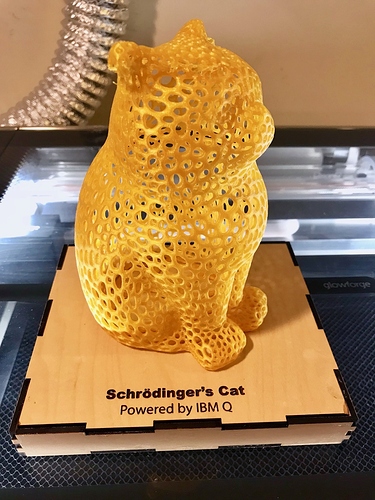 By the way, I still will see patients there (which was always a small part of my FTE), but IBM agreed having active clinical practice made me a better deputy CMO as “I eat my own dog food” so to speak.

Question… When you observed the Laser Cat file, was it alive or dead?

Sad for the loss of your old job! Happy for your new job!
(Gosh… That’s a rather quantum statement in itself, huh.)

…another door opens, in your case REALLY quickly, which is good news. The burning question now is: will you be wearing those blue scrubs, or an IBM blue suit, in the photos you post on the Forum!

will you be wearing those blue scrubs, or an IBM blue suit

IBM explicitly doesn’t do the blue suits and white shirt/blue tie anymore. They are fully business casual. I pointed out to my boss that business casual for a doc is scrubs, he laughed…

As someone that works for an organization that both partners with and competes against IBM in multiple areas, congrats on the new role.

Great to hear you recovered fast from loss of funding. Not always the case without switching towns I would imagine.

Unique skills are the bomb. I just got bored with a job one day shortly after the prototyping phase was completed. I reasoned that nothing new to figure out was coming my way anytime soon and I seemed to be treading water.
Told them I quit. Went to lunch. Applied at another outfit that afternoon and started working there the next morning. Got to watch the relief in my wife’s eyes when I told her I quit, then said, by the way, I start new job in morning and have to get up a little earlier.

Funny part of this tale is the jobs were very related and there actually was not a lot of new to be had, but new people, new workshop and new product put the mystery back into my life.
Weird how things work at times.

or an IBM blue suit

Welcome to the neighborhood! You are all the way on the other side of Kendall from me. Luckily, there are a ton of great lunch spots in between! And, they finally just re-opened the Longfellow bridge!

Yeah, I decided yesterday was such a nice day I’d walk to Charles/MGH to get the red-line.

Sounds like you landed on your feet. (Rather like a cat, though maybe not Schrödinger’s.) Congrats on the new challenge.

You are all the way on the other side of Kendall from me.

Google Maps reports a 6 minute walk between us.

Wow! “Lost research funding”. I guess I think too much about the supreme resource that people are. I was talking to a local business man about human resources and hiring and firing processes, especially when a company is bought out and new synergies mean fire the old team. He said, “A salary is a liability and is not a profit making line item.” Hard for me to fathom.

So, are they going to keep the intake health record database going?

Well, at least you are going to be at a the center of some significant stuff with IBM. I pray that everyone can land on their feet! Thanks for sharing the news. Good luck in the new position.

I might have to make that laser cat. I just got a Creality CR-10S yesterday and am looking for a tall project to test the volume! That would be along print.

I won’t lie, I am deeply disappointed. Sure you are fine but what you were doing was the coolest thing ever.
And sure, I’m sure you will make things better at your new job but man I was looking forward to your next great simulator.

Sure glad things are working out for you! The cat is pretty cool too.

Thanks for the video! Decades ago, I would attend meetings with IBM folk, they always wore $1,200 matched blue suits while I wore bluejeans. Based on the video, I guess they were twenty years behind or I was twenty years ahead of their current clothing trend.

I operate in both the Mac and PC world, the IT folks at my organization called Macs, “Mac-In-Trashes” and only purchased IBM computers. They once told me that Macs were not computers. My staff were miffed when I thanked our IT people for saying that, but fully understood when I explained to them that I could now purchase high end Macs without going thru the onerous bureaucratic IT computer acquisition process controlled by them and high influenced (rigged) by IBM.

Since Mac’s weren’t computers, I could just go down to the local store and buy them.

I was talking to a local business man about human resources

“Human resources” - probably one of the most demeaning phrases in the world. It reduces people to statistics. Interchangeable parts.

My staff are my team members and my people. Computers and money are resources. My people may be a resource to the bean counters but that’s precisely why loyalty is generally to the profession and not to the company. People are the heart of a successful enterprise with staying power. Resources make for commodity products and organizations.

I have employees who have worked for me for 25 years in multiple companies - they’ve followed me to new companies because they’re part of my team not because I managed them. There isn’t a resource I’ve ever had more than a couple of years. People last.

“Human resources” - probably one of the most demeaning phrases in the world. It reduces people to statistics. Interchangeable parts.

And some companies go further, organizing themselves so that workers will be interchangeable and easily replaceable. Usually at significant loss.

From the time of Henry Ford (and I suppose long before) the goal has always been to reduce the necessary skills and knowledge needed for each person to do a job, so it is not surprising that the person with no direct knowledge of what a job takes to do is charged with finding the person to do it. As such it is all a matter of fitting things that can be quantified to match column a with column b .

When I first started working in AutoCAD all the requirements were that folk had at least 5 years experience in AutoCAD which was difficult as the program had not been around that long, so the only folk who they would talk to were liars.