Not sure when this went into effect, but it isn’t great. I do scores on the majority of my projects, and the difference between Draft and HQ are pretty apparent. Not exactly sure why this is only the case for scores, for example, there’s a Draft Engrave option, but that isn’t the default. Just wondering if there’s a way to get these switched back, because I know I didn’t have to switch between these options previously.

I’m assuming it’s a UI thing on the backend, probably for everybody, so maybe it can’t be done and I’ll just have to incorporate switching the options every time, but I figured I’d bring it up.

just have to incorporate switching the options every time

I guess I would setup a custom setting for it.

It was changed in April.

I’ve seen other complaints. Not cool to just switch a setting that affects previous designs.

I could do that, but it’s just as many clicks to hit Score then HQ as it would be to select my new setting.

Thanks, @eflyguy for pointing that out. I just don’t get how they think the Draft Score is as good as the HQ. I mean, look at the difference here with HQ on the left, Draft on the right: 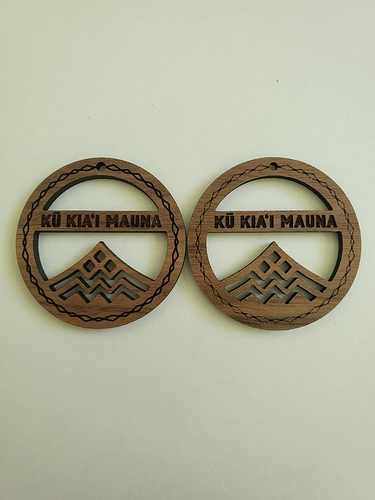 Since it was an official release, my hopes of having it reverted are probably pretty slim. Would be cool if we could decide the default settings - now there’s a “hopper” idea.

That would be a nice polish to the UI.

One person thought their machine was failing, as prints that looked great one day suddenly didn’t the next…

I’m so sorry about the behavior you noticed while utilizing Draft Engraves and HQ Engraves.

As @eflyguy mentioned , we did modify the default setting to be set to the Draft Score instead of HD Score when printing on Proofgrade material. I apologize for this switch, but I appreciate the feedback you provided. I’ll make sure it gets back to my team.

For now, you will need to adjust the setting to HD when engraving, so that you receive the results that you are attempting to accomplish. I’ll close this thread for now, but please don’t hesitate to reach out to us directly at support@glowforge.com in the future if you run into any more trouble. We’re here to help!