I’m making some “dungeon tiles”, and I’m using 2 different settings for scores, since I want some of the lines to be much lighter than others.

The score lines in the 2 sections seem to be slightly out of alignment in some sections, but not in others. I’m a little baffled as to what is happening.

Here is a screenshot of one section of the SVG:

Here is the resulting cut (note that I stopped it half way through so not all the yellow lines were cut). 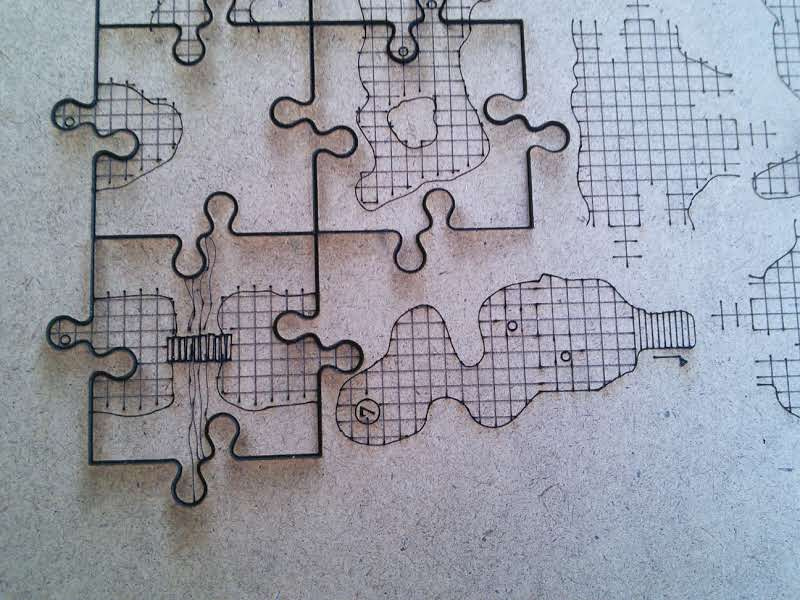 You can really see the mis-alignment on the bottom left tile. The grid lines are all about 1/8" too far up. The circle in the left hand “puzzle nob” is also too low, it should be centered.

What is weird, is that the tile next to it, the grid seems to be aligned. I would say that 90% of the tiles have some alignment issues. I think most of them are in the up/down direction, rather than left/right.

I could move the grid down a little in the UI to compensate, but the tiles that are correctly aligned would no longer be aligned.

I’m not sure what to try next. Any thoughts? I’m hoping to have these done by Christmas.

What happens if you rotate the design 90 degrees?
Is it out of alignment in the same direction?

Good idea. I’m trying something else, and if it does not work, I’ll try that next.

I’ve got a post into Support on Cut/Score shifting in a puzzle cut I was working on. It seems that speed is a contributing element there. When I ran the same at 200-250 zooms, it came out perfectly. Additionally, when doing 1 pass, speed at 500 zooms, and repeating that print a half dozen times, the shift was exactly the same every print.

Yes, I think speed is a factor. I turned the speed and power down, and changed the order of operations, and it came out completely aligned (but it took longer to make). To see how they came out, see my other post here:

Dungeon Tiles Made on a Glowforge

My son plays Dungeons and Dragons. This semester, he’s trying his hand at being the Dungeon Master. Once in a while, his friends like to do a “Dungeon Crawl” where all they do is generate a dungeon and fight monsters in it. We were talking about different ways to generate random dungeons (most of them on the computer). For Christmas, I created a set of dungeon tiles for him. [image] [image] There are 50 tiles, each about 1.5 x 1.5 inch. He can re-arrange them to his heart’s content,…

I’d still like to know the root cause of this though, so I can actually cut these faster.

Those dungeon tiles are awesome. Very clever using puzzle shapes to join them!

Since your print has turned out well, I’m going to go ahead and close this thread. The team is continuing to research the issue, so thanks for letting us know about it!