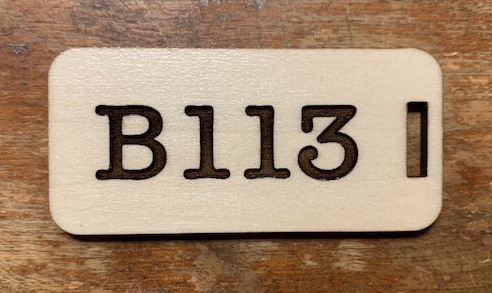 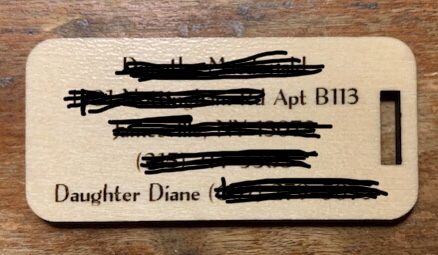 My friend Diane’s mom just moved into a senior care facility. At this point she has mild dementia, so it is not easy to remember some things. Diane asked me to make her a small keychain she can wear around her wrist on one of those twirly bracelets, with her apt number on one side, so she can charge things in the facility, and her full address on the other side in case she wonders off.

Great idea and use of the

It’s very simple. It was more about the idea really. Was so happy to make it for her. It’s like a practical cut!

Very nice idea! I hope it works well for her. You might find that others want one too!

I had a similar idea and I made my husband an emergency tag to go in the car window. We both have a car and it occurred to me that if either of us had an accident, the police would have phone no’s of next of kin, medical issues and name and date of birth. I also put our doctors surgery on it. I used acrylic and hung it on a sucker pad.

That is a terrific idea! And I especially love how the daughter’s phone number is on there so if anything happens, those in charge have the info right there instead of having to go look it up. Minutes saved can make a world of difference. Good job!

Thanks!
She was very excited to put it on today!

That looks quite nice; I’ll bet she was pleased to get it. Yes, this is a very practical cut!

What a fabulous idea!! I’m sure Diane was thrilled, and her Mom!

Lovely to be able to help. Thanks for sharing.

It already saved the day. My friend reported in:

“I needed to ask the home care agency for someone to take mom into her primary care doctor’s office for an in-person visit. Someone who doesn’t work with us often was available, and I asked the office to give her my phone number so she could call me from the appointment and I could speak with the doctor and listen in. The office gave her the wrong number, and she didn’t know what to do, but then mom gave her the keychain which had my number on it, and she was able to call me!! “

That is great news about the keychain! And I’d sure be letting the office know they gave the wrong number! What if your mom didn’t have that with her? Hopefully the doctor would have your information, but to have it that handy is indeed much faster and easier! Glad it worked out, and hope your mom’s appointment went well.

P.s. it’s my friend’s mother - not mine… and yes, it was great to be useful already.