@CMadok designed this incredible Japanese game and we are so fortunate it is in the catalog. She told me that it was one year in making. We had many wonderful telephone conversations while this game was being designed.

I wanted to create some jewelry to wear so when Christy and I are not talking on the phone — a part of her is with me.

I took the game pieces and blinged them out with artwork and crystals. I engraved a little bonsai tree and a Japanese word.

Having a Glowforge gives everyone the ability to design and make jewelry from game pieces ——that are only available in the Glowforge catalog. 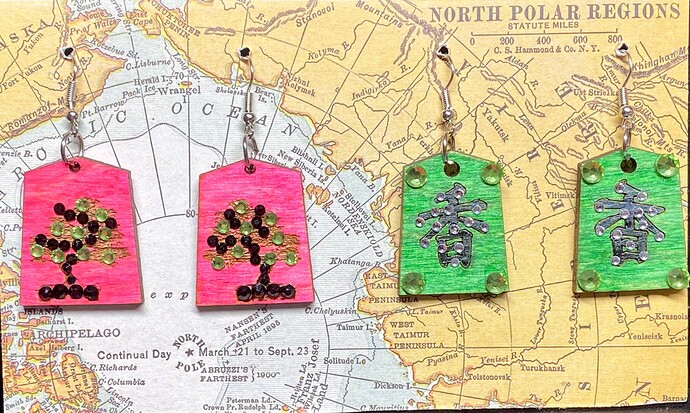 What a superb idea! They look awesome!

I made a little mistake I mirrored the character. You can not do that because that is a word.

So if I am out in public and a Japanese person comes up to me I’m gonna tell them some idiot @CMadok in California designed it.

Could be a good conversation starter! As long as it’s not too much of a bad word!

It is the actual word for the game piece. It could be pawn, bishop, knight, etc. @CMadok will have to be consulted to find out the name of the word.

They do make nice jewelry!

I’ll shoulder the blame once, after that I’m going to charge you.

extra if they recognize me and start whispering about my lack of proofreading skills.

A female Marine in Japan wanted a tattoo in kanji (the writing system based on Chinese characters). She wanted a phrase that represented her idea of courage, and decided “guts” was the right phrase. Since she didn’t know the kanji symbols for guts, she left it up to the Japanese tattoo artist to figure it out.

After the deed was done, she was showing off her new tat to her troops. Someone who could read kanji told her it said “intestines”, the literal meaning of guts.

After that story, and all the interesting Englishified Korean advertisements I’ve seen, (“Wonder Panties” for men…plaid boxers) I came to the conclusion I should never do something in another language. I know I would make a memorable mistake.

I should never do something in another language. I know I would make a memorable mistake.

After I read this I burst out laughing. I would be the same way.

Someday I’ll relate the story of the two Americans who joined a German shooting club, and what they really said.

I absolutely love love love when people share stories about experiences they had. To me it’s like being in a real life novel. I look forward to hearing the story.

Apologies in advance for dancing in your spotlight, but here goes…

Back in the 80/90’s when I was stationed in Germany, I was mildly accomplished in speaking the language. I found it easy to pronounce once I got over my astonishment that the river running through Frankfurt was pronounced “mine” not “main”. (River Main) In German, the 2nd vowel is pronounced and the 1st vowel is silent.

Other combinations can lead to comical pronunciations. Beware of telling your hotel Ich komme nackt (I come naked) when you really mean Ich komme Nacht (I come [to]night).

So, these two American lieutenants (LT) brought their long guns to Germany because they couldn’t stand to go 2 or more years without them. German law only allows people to shoot at the range (unless on guided hunt), and they had to belong to the local shooting club.

They applied, and were finally accepted to the club. The police gave them their rifles back, and they took them to the club for long-term storage. At their first day to fire, they sat through the safety briefing, observed the signs, watched what other members did, and went off to shoot.

Members in the club take turns going downrange to replace targets after several volleys. When it was their turn to change targets, they made the range safe by waving an orange flag, and announcing on the loudspeaker, “Don’t sh…”

[Your sponsor takes this moment to remind you that in German, ei = ‘eye’ and ie = ‘eee’; if a word ends in e, it’s usually pronounced ‘uh’. The word they were looking for was “shoot” (schiese). Instead of saying, “Don’t shoot, don’t shoot” (nicht schiese), they were saying…]

I don’t know if they went back for a second visit.

I’m hyper aware of a lot of the language issues. A friend of mine when I was younger was from Japan. Around that time, it was year of the dragon. The clothing stores went nuts with year of the dragon shirts. She and I went shopping together, and I asked her what one of the shirts said. She told me it had absolutely no meaning, each character was completely random and she suspected they were just chosen for the cool factor.

Then you always see something about celebrity tattoo fails or some hilarious translation… like pants(u) is also panties in Japanese.

I had to study international marketing in college, and the stories about US products failing in other countries because of bad name choices is interesting too. Hopefully by now they’ve learn to hire language experts.

OMG—-ROTFLMAO!!! I completely understood the story because Eric and I shoot lots of guns. At our gun range. Someone will yell “Cold Range!” Immediately all handguns are unloaded, all magazines taken out of the rifle, and then we have to place a lock on the trigger. When everybody yells “Clear!” —- it is only then targets are changed out. Also no one is allowed to touch their firearm during this time.

Also no apologies are necessary for sharing your story!!! One of the greatest things I love about the GF forums——is how easily a thread gets hijacked into a totally different subject. I love it and I find it so comical.

This is just a made up scenario. Someone starts a thread about material used in the Glowforge and 30 posts down the thread has changed to dog flea medication or someone is sharing a tuna helper recipe.

One more thing you are a very empowered woman. Knitter by day—- sexy military commando by night.