Made this for a friend that works at LabCorp. They are working overtime to keep us safe and wanted to show my appreciation.

Lot of fun playing with oak, maple, and birch to create a visually pleasing contrast. 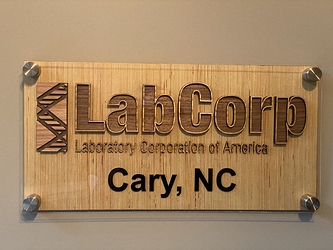 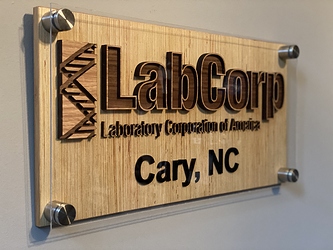 I cannot quite tell from the photos… is anything engraved or scored on the acrylic? Looks like it just shield to the sign?

Acrylic is just a shield.

Made this for a friend that works at LabCorp.

My daughter is working at LabCorp in Burlington

Small world. She’s doing some overtime but there’s a crazy kid who was working 120 hours a week.

I read it as SlabCorp at first, now can’t be unseen.

there’s a crazy kid who was working 120 hours a week.

yep. He lives 10 minutes from the lab. Rolls out of bed and off to work. Work to home and sleep. they’re paid hourly. It’s like gold-rush days for lab workers. He was only getting about 4 hours or so of sleep a night though - he kept insisting on eating

My daughter works Sun-Thurs from 6AM to 230PM but her shift ends later because if she starts a run at 2:00 she has to wait until 3:30 before it comes out and can be catalogued and completed. So depending on which machines are available for her during the day she can be done anywhere from 2:30 to 530 or 6. The machines handle anywhere from 200-400 tests at a time so the cataloguing takes time even after the machine spits out the assays. She’s done 5000 Covid tests in a single day.

This week is slow though - she’s working her published shift. They’re running low on reagents. Can’t run the tests without the base chemicals.

What’s amazing is how everything keeps breaking in the supply chains due to the magnitude of this thing. Everyone who wants to get tested can’t. The ones who can won’t get their results back for a week or more. Except for the ones who have it, the test is pretty worthless by then - you might have been negative then but that says nothing about now. And those folks who are positive didn’t know for a week and could have infected 100 other people.

The shear volume of hundreds of thousands or millions of tests a day feeding into a lab system designed for that many in a year is a strain.

I watched a semi-documentary on the logistics of testing. We are far from equipped to run it at the scale needed.

It involved a lot of math regarding combining samples based on average infection rates in a region, to best utilize available equipment and chemicals. In many cases, more than double the number can be tested.

The machines weren’t built for the volumes we need. The “big” one she uses can take 4 trays. The normal one takes 2. There are 96 samples in a tray. One takes 90 minutes, the other 2 hours.

There are some labs being allowed to do mix sampling. They take part of 4 samples and mix them together. Those get analyzed by the machine as if it were a single sample. If it comes up negative then all 4 are negative. If it comes back positive, then the 4 are individually tested to find the positive one(s). That works best for areas with low positivity rates but if the positivity rates are high it means it’s more likely to require 2 test runs for the samples so the time savings gets eaten up. It’s a tricky process keeping all the records straight when you’re mixing samples plus you’ve got extra prep time to combine the samples.

Beautiful sign! I really appreciate what Lab Corp does for our health industry. They help keep us safe.

Yup… that’s what the video was about - the cross over between local infection rates and the number of samples that can be combined.

I read it as SlabCorp at first, now can’t be unseen.

Indeed, that was my first impression also…

She’s doing some overtime but there’s a crazy kid who was working 120 hours a week.

They should just give her a room to crash out occasionally.

What Germany did at one point was recruit the veterinarians to help run the testing where they had equipment designed for humans to run the tests on animals. I would think that it increased their capacity by 10-20% at least.

They should just give her a room to crash out occasionally.

She said there’s almost no space in the building (one of a half-dozen similar ones on the campus) that is not given up to testing. A small break room, a handful of offices and a locker room. And they have hundreds of similar facilities all over the country. (As well as similar competitors.)

They have supply problems with lab coats, PPE, not enough lockers for their personal stuff (they hot rack like the Navy

), not enough refrigerator space for lunches (they keep getting pulled into sample storage service) - just wild how something as simple as the testing of samples is so stressed. No wonder complicated things like hospital care is at the breaking point.

Meanwhile, testing labs in France are closed for their summer vacations, which is a “hard earned right” for the workers.

testing labs in France are closed for their summer vacations,

Total cases per million population
US -14,851
France - 2,964
And the US has ten times the number of critical cases per million.
By the Wash. Post article, not all Labs closed. They have what would be a huge problem there but I wish we had a problem anywhere near as mild.

What is the physical size of the sign? Very nice!!!

Really nice job on this! Love all the texture from the various materials. Nice!