Walking through Michael’s, I came across the following in their clearance seciton: 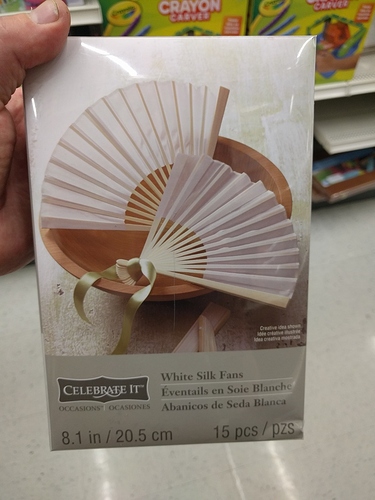 I was thinking patterns could be added to the ribs or a message engraved on the larger pieces of wood on each end of the fan. I couldn’t find much on the Google about working with silk on a laser. If it didn’t melt entirely or just catch fire, patterns could be cut between the ribs, too. With the upcoming lower-low power it may be possible to burn it gently enough in between them, but silk can be pretty delicate. Anybody have experience or better luck researching? I’ll be honest, I won’t be using ones made with silk for the same reason I won’t be using death fabric (leather). I would, however, like the knowledge as I might use something with (laser safe) synthetic silks that would be similar in at least some ways. And if others could use info on silk, I’ve got no problem with that.

I think @johnbrooker is our resident fan expert.

Thanks Cynd11. I guess I have to accept the position !
I’ve always wanted to meet another fan maker, and so far that’s one guy in France, a girl in Spain, and the head of the last family of fan makers in Japan. So we could have an international convention in a broom closet !
I have to add, immediately, though, we all make the completed fans by hand - no factories are involved.

As to working silk with a laser, I have no knowledge as yet, but hopefully that will soon change.
Silk does burn quite easily, sort of melts and drips out of the flame, so it’s not a direction I shall go.