I’m having issues with smell and I cut a lot of acrylic. I just cleaned the exhaust fan, and though that helped the smell a lot, I’m still getting a smell that’s more than normal and I can’t tell where the smell is exactly coming from. Do you guys have any tips and tricks that might help?
I also have the connections taped off with aluminum tape, but could it be possible I have a hole in the foil duct? Or do I need to change the foil ducts often?
Pictures for reference:
Setup1
Seup2

If you’re running just your external fan (and not the internal glowforge fan), the issue is between the fan and the outside world. Everything else is under negative pressure, so it can’t be leaking.

I would suspect your exit panel as much as anything else. Running that fan will suck air out of your room, any little draft by your windows will be pulling the fumes right back in. It looks like you caulked that 2x6 (2x8?) into place, so that’s good, but any other little draft on all those windows… acrylic is stinky stuff, it wouldn’t take much.

The ducts could have tiny pinprick type holes. I might switch to plastic hose, I like insulated duct because it cuts noise too.

I have the internal fan on. I read that I should turn it on since the inline fan is like the GF filter machine or something like that. Is it better to turn it off?
And I just bought these ducts so hopefully once I install them, they’ll minimize smell more IF I do have any pinprick holes

So the reason to turn off the internal fan (noise aside) is that it reduces the amount of the system that is under positive pressure. That is, if you don’t have your external fan pulling more air than the glowforge can put out, you’ll have air pressure built up between the glowforge and the external fan, and so air will be pushed out out any small gaps in that part of the run.

The run from the external fan to the outside world is always under positive pressure, so you still have to figure out how to seal all that up.

Thank you so much for all that information. I just turned it off and the machine is incredibly loud, is that normal?

Hmm, you want to tell the UI that you have an external filter.

Louder generally means that you said “I don’t have an external filter”, which turns the loud internal fan on.

You generally want it like this when using an external fan: 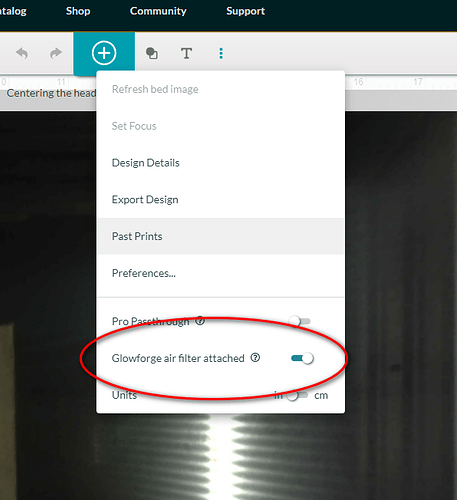 Ahh okay then yes! I have had that with that setting the entire time

Cool, so then generally you can ignore the run from the Glowforge to the external fan when looking for small smell leaks. Ideally that would be as sealed as possible, but don’t sweat any pinhole sized gaps. It may not be a total solution but at least it helps narrow your search anyway.

And I just bought these ducts

These will definitely help - the tinfoil ones get tiny holes way too quickly. I still smell a touch when I do acrylic, but as @evansd2 mentioned, most of it is coming back into the house through other open windows

I cut alot of acrylic aswell I run the inline fan and internal fan with glowforge works perfect for me. Yes u will always have some smell that’s normal. I also have an air purifier in my room to help with smell and works awesome