I recently printed and assembled the Space Shuttle Discovery and it brought back memories of working as a test engineer on the Saturn rocket engines and instrumentation ring in the 50s and 60s.
It printed on proof grade Maple with no problems but it is necessary to make sure all pieces are marked with their part number as they are removed from the Glowforge. It is unfortunate that many of the pieces are permanently marked as these markings show up in the final assembly.
The assembly instructions are easy to follow although there are some discrepancies in identifying part numbers. I have reported the ones that I found to customer support.
The instructions for the acrylic stand state that the Space Shuttle Discovery rests on this stand with gravity alone. This is not the case as the angle of the stand is not great enough to allow the shuttle to lie in the upper supports. 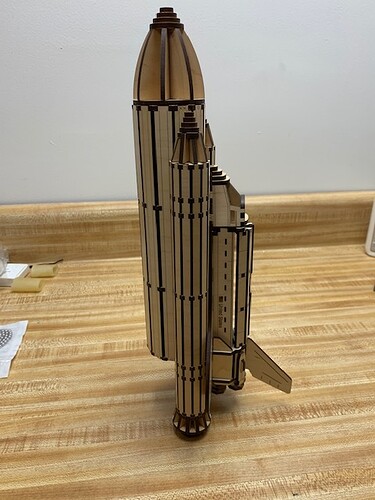 I made the shuttle too and found the two booster rockets to be challenging. The parts look similar and I ended up mixing up a couple and had to make a couple of parts over. I painted mine with a paint gun using watered down acrylic paints. The watered down paint allowed the engraving to show through. Here is a picture of mine.

These both look awesome. Great idea on the watered down acrylics!