I was just about to start a job when I noticed that I was mistakenly getting the Proofgrade warning. In this case, I had flipped the material so the barcode sticker was not visible to the camera, but I picked my material from the list. 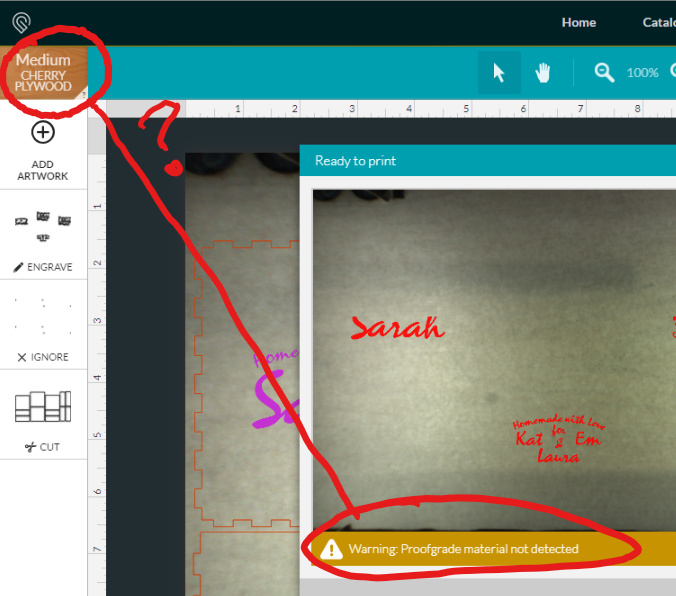 I see this was reported many months ago but the bug lives on:

"Proofgrade not detected" after detecting Proofgrade Problems and Support

But isn’t this message correct? It didn’t detect Proofgrade and it can’t detect it because it can’t see the QR code. What is your expectation in this circumstance?

I’d expect it to believe me when I tell it that I am using Proofgrade. The warning just before starting the job seems misleading even though you can argue that technically, it is correct.

I’d ask you, what function does the warning serve when the rest of the UI acts as if Proofgrade is in use? If the warning is so important, why is it not visible before committing to the job?

But the warning isn’t that you aren’t using Proofgrade settings, it’s a warning that the device doesn’t know what material is there for itself.

My guess is that this behavior is working as intended and it is desired by the company since they need to put the warning somewhere for when people are using Proofgrade settings with non-Proofgrade material (and I’d prefer they didn’t remove the ability to do that). I know that’s not what you did, but how does the machine know?

But the warning isn’t that you aren’t using Proofgrade settings, it’s a warning that the device doesn’t know what material is there for itself.

If that warning is so important, it should also be visible while you are arranging art and changing settings, where it might be more useful.

Its current placement is inconsistent, unhelpful, and misleading… IMHO.

I’ll see if it still works this way next November, when the issue has its first birthday. If so I will concede they’ve done this by design but I still won’t like it.

They usually appreciate suggestions, so I’m sure they’ll pass this one along, but I hope they don’t take it since I personally prefer not having the warning in my way while I’m working in the UI and before I hit the print button is sufficient for the purpose in my view. It’s a reminder that there are risks to cutting things that aren’t laser safe and those risks are yours

Yes, if you put a piece of PVC in there and put a lot of work into your design in the UI, you’ll lose a bunch of work when you finally read the warning when you hit print, but hey, hopefully that’s the minority case (but also important to make an attempt to warn).

Yeah, I’m with markwal on this one. You told the machine there was PF Cherry in the machine. The machine is simply telling you it doesn’t recognize the material. Kinda like, “Hey, I know you said this was Cherry, are you sure this is what you meant to use?” It’s not that it doesn’t believe your selection, it’s just double checking before you push the button and it’s too late.

@kittski & @markwal are correct, IMO – It’s not stopping anyone from proceeding, but is attempting to gently remind the use one last time that all might not be as expected.

It’s not especially gentle, it says “WARNING” with an “!” icon. So it seems super important, but like I said, still not important enough to display beforehand. It seems inconsistent.

But I can see I am outvoted on this one.

I suspect the warning is to placate the FNL desire to CYA, but more like smothering it.

Thanks for the answer @markwal, that’s right. I’m going to close this thread - if the problem reoccurs, go ahead and post a new topic. Thanks for letting us know about this!