Now of course I know you can’t SEE through a Stargate, you walk through this silvery blue mercury-ish goo. But I would NOT have known how to color that. I could have gone full Stargate theme with an actual Jaffa from the film (note that I only ever saw the original movie, I never got in to SG-1, Atlantis, etc.), but instead, I landed on a more Earth-bound concept of what we as an early civilization may have perceived on the other side. 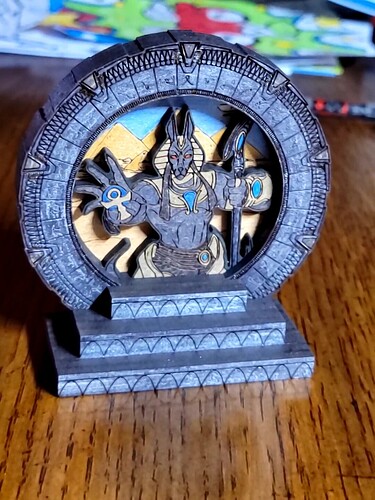 The camera can’t really pick up the engraving on the symbols very well because of the sheen, but they do look a little better than that. I thought about cutting out the clamps and popping those forward an extra layer for more dimension around the gate, but it was a lot of editing work and the perfectionist in me “fell asleep.”

Oh, nice! You’ve made the gate look like carved stone, which is a cool look.

popping those forward an extra layer for more dimension around the gate,

A really nice job that! 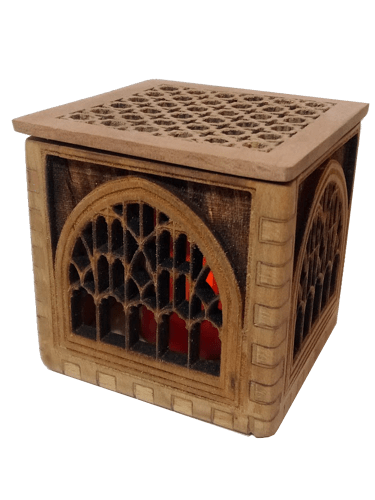 I cannot believe there’s a Stargate fan who hasn’t enjoyed at least some of the shows… that is a rare find. Are you Roland Emmerich? He apparently hates the TV shows, haha.

That looks great. I love Stargate and Egypt!

That’s beautiful!
In case you hadn’t run across this one, some people go big!

Hahaaa… We have 10 Escape Rooms here. So 10 of the glyphs represent those rooms.

That is undeniably awesome!

I LOVE Stargate - and I’ve watched the entire SG-1 series! Started the others, but haven’t finished them. As always, terrific design!

Atlantis was pretty good.
Universe was terrible and I never found the more recent series about them finding the gate …but it was working back then?…but the movie and sg1 establish it didn’t ever work until the movie…
And that’s why I never bothered finding the episodes.

I was totally into the idea. Sure, they established that the gate never worked until modern times, but you can find a way around that. A Stargate show with some Indiana Jones era Nazi-fightin’ action? Sign me up for that!!

Even though I was open to the idea of the show it was just a stinker… it was like a student project. A junior high student project… just kind of terrible all around.

They did explain why no one remembered the gate had been fired up before, but like the rest of the show the explanation just wasn’t very good.

but like the rest of the show the explanation just wasn’t very good.

If one walked through a gate that was buried underground, one would not get very far. Throughout the whole series that was how they made them “not work” and the one they did use had a shield that would have the same effect on someone trying to use it without permission. There were/are a lot of issues with much of the series but I did not find that to be one of them.

The “zero point” module as an infinite power source was much more of a kludge.

The issue I had was not with burying a gate to disable it but rather a convoluted plot device. Catherine Langford, the woman who spent a long time working on the gate per the movie and SG-1, was in Origins and they had to figure out a way to make her forget she knew more things about the gate. That was the clumsy part.

Love that you’re always giving us something new to see! Awesome piece!