It’s a direct rip off the Ear Savers program lead by Glowforge… how do we feel about this?
Yes, they provided it for free- but it feels very scummy. 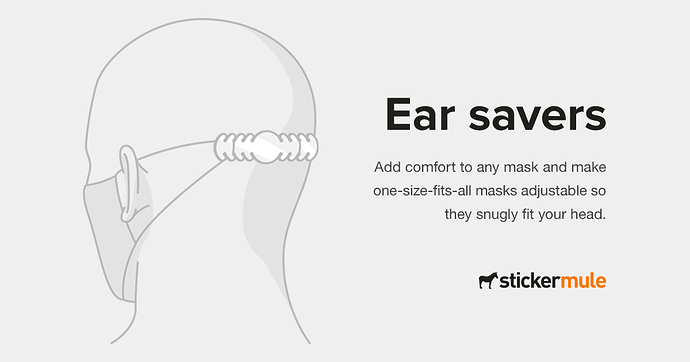 Add comfort to any mask and make one-size-fits-all masks adjustable so they snugly fit your head.

It does tend to peeve you off, doesn’t it?

My concern is where are they getting them. Almost seems like they’d be ordering from GF and then selling them. I know that’s just speculation. But yea, it definitely feels slimey.

if you look, it’s a similar pattern, but it’s a little different in that they’ve rounded more edges (i actually like theirs better for that).

let’s not get overly bent out of shape over this. the GF ear saver pattern isn’t particularly unique. similar designs are out there. i don’t think it’s a “direct ripoff.”

nor do i think it’s a horrible thing that anyone is selling these. not everyone who might want or need something like this is getting them as donations. people who work in grocery stores all day, or at the post office, or at your local home depot or other retail venue, or working in factories to make things like PPEs, or working at farms or meat packing plants, might want these. the GF program is not targeting those groups.

while i’ve handed some out at my local HD, grocery store, and post office, i doubt many people are out there donating to these places. and there’s no reason someone couldn’t be making these to sell to any of those people. it’s not like they’re selling at inflated prices. at most, they’re less than a dollar each. and businesses can buy 500 (for $0.33/ea) to hand out to their employees.

Personally, I’m selling my “S” hooks to help cover the costs of me helping with the #earSavers effort… and I’m getting attacked for selling “because Glowforge is giving them for free!” ( a fellow glowforge person on facebook) when in reality it’s NOT free for us… we are donating - but as we all know, nothing is free.

My concern is where are they getting them. Almost seems like they’d be ordering from GF and then selling them. I know that’s just speculation. But yea, it definitely feels slimey.

btw, that’s pretty harsh speculation based on zero evidence. this is a company that produces die cut materials, no reason to believe that they wouldn’t have the equipment to make these (and probably far more efficiently than trying to get them from glowforgers).

I sent them a note (innocent, wide-eyed wondering note

) asking if they knew about the GF initiative to get a million of them out there and if they were part of some new commercial initiative to do that.

This is the the kind of inane bullsh*t that made me quIt the FB group.

well, to be fair it was on marketplace, not the FB group - im not even part of that… i really like the community here

“Rip off” is a bit much, unless you want to also say Glowforge ripped off the people who were doing this long before they started.

Also, at some point, more than just frontline workers want these.

I asked them and they said they’re not selling the earsavers but they are including them for no charge with mask purchases.

yeah, but you still made the accusation. it’s kind of shitty to accuse someone even if you say, “it’s just speculation” if it’s just baseless speculation.

they still have them on the website - but yea, it’s whatever at this point, just hate to see that

Folks at GF are aware, don’t lose sleep over it.

i’m still at a loss why this is so upsetting to people. the design isn’t unique. they’re not selling these at great profit ($0.30 to $1, depending on volume). why does it bother people so much?

The reason it bothers me, is because they could have at least mentioned Glowforge. AFAIK, they were the first to start this volunteer effort to help the frontline workers.

Not by a long shot.

oh god no, they were far from the first. people were making these clips for folks long before GF’s efforts. my local makerspace had made thousands of facemasks already and were organizing people all over the DC area to make PPEs for healthcare professionals.

look, i laud GF for making it an organized effort and creating a site where people can match up. it’s a great thing they’re doing. but i’d made at least 1500 clips before the earsavers came on the scene. and plenty of people had made far more than i had. i had probably gone through 6-7 designs before their ear saver design and site became public.

the more you know

well, Glowforge is the reason I got involved, so perhaps that’s the reason we are biased?