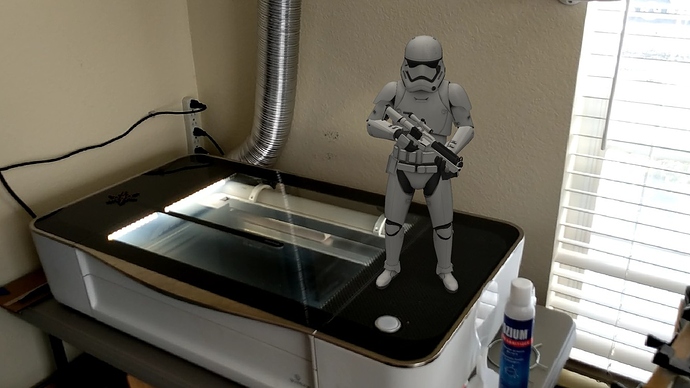 In my experience they don’t make the best guards. But better than nothing

I hope the GF can aim the laser better than the trooper.

Yeah, why does this feel like a reference to the registration problems some are having?

The glowforge’s aim is perfect, but the storm trooper is faster on the trigger. The glowforge, however, doesn’t go chasing after the first rebel it sees like a dog after a squirrel. If the glowforge had been on schedule the rebellion never would have succeeded, so if you’re pro-rebel I guess the delay was a good thing.

Ha! I wasn’t thinking about that but you are correct. Some? I would say every - just to different degrees.

I would say every - just to different degrees.

I would say every - just to different degrees.

You can take an item, place it on the edge of the tray, and make a new cut with a presision less than the width of the beam spread?

Not quite at the edge, center half.

So I stand by my original statement.

I’m happy with my machine too. We just aren’t at automatic passthrough alignment yet. Until then the GF does have something in common with the troopers.

Having a little fun with the Pixel 2 AR stickers.

Oh, I didn’t realize what you were doing when I first read the post. I thought the trooper was an actual model.

I thought the trooper was an actual model.

You’re not the first. The Pixel 2 does a good job. Here is a bit of video of the thing.

I thought the trooper was an actual model.

LOL, no kidding they can’t hit a dang thing.

Very convincing. Even after I noticed the light wasn’t hitting him from the right direction, he still looked pretty real!