Any idea what would be causing this? I’m willing to chalk it up to some mistake I’m making on the Illustrator end of this image, but it looks great in illustrator - the vectors are warping and misaligned after being uploaded into GFUI - help? 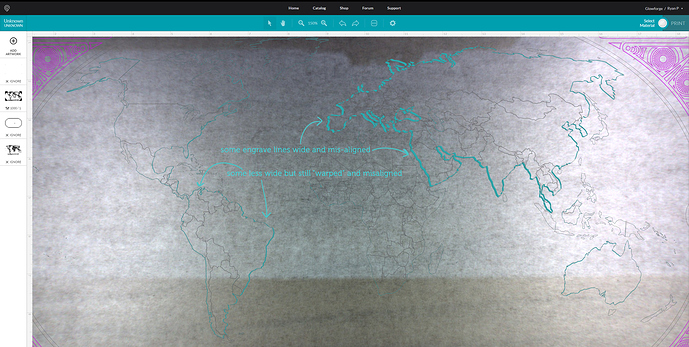 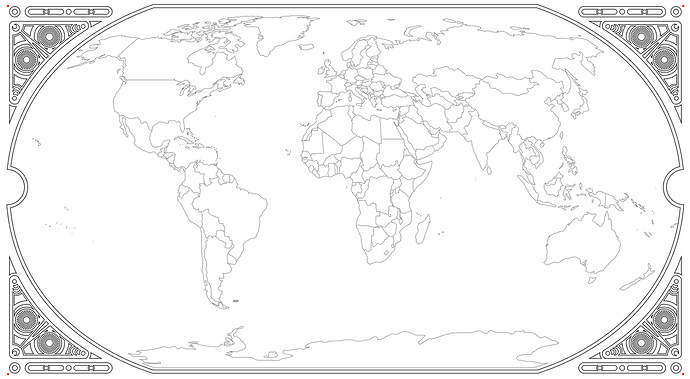 Trying to understand the photo. The teal lines are all your onscreen pen marker? I can’t really understand what you are talking demonstrate. Sorry. It looks like from your operations thumbnails you have the boundaries of countries in twice, but one is ignored.

You said vectors are warping. So this is a vector file you are trying to engrave? The image uploaded is a bitmap. Are the lines single strokes or closed thick paths?

Is this the preview image or did you print it? An image this size will have some preview warping but should print out fine, although it is rather large to try to do at one time.

Here’s the jpg in my GFUI 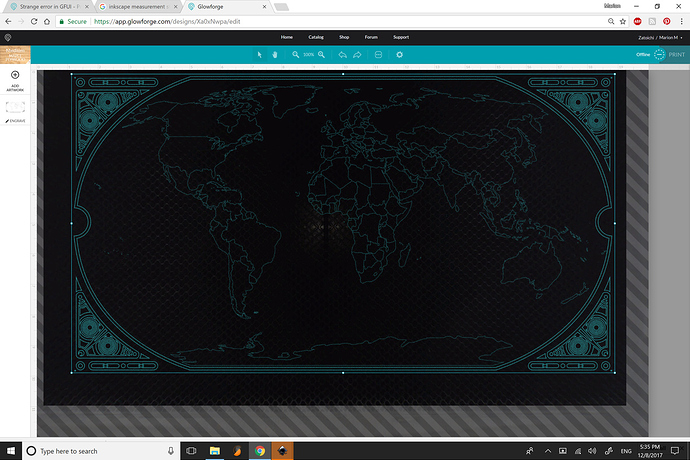 There are two continents layers - one is a cut layer, and one is an engrave layer. The idea being that I would cut wood, and engrave on cork later - I guess the two layers don’t need to be in the same file, since I can align them later in life.

The image I attached of how it is supposed to look is only a flattened JPG of the SVG file - I wanted to show that my original file doesn’t have those weird warped lines.

The one visible in the image is the engrave layers, and the lines are warping to be wide and “calligraphic” in the GFUI. They aren’t set like that in my file. I haven’t printed it because I only have so much wood and I’ve ruined so many pieces on the GF so far because of weird errors - I’m being cautious.

It would be really helpful – the easiest way is to put it into a zip and upload that.

If you would like to message me the file, I’ll take a look at it and see what’s up. You may not see the SVG once it’s uploaded because Discourse treats the height and depth as pixels and not inches, but if you add two zeros to each measurement in the tag, it will appear.

Some of the Illustrator experts might have something to say about how it gets exported. I only use Inkscape. Since the bitmap export looks, good, I’m not sure why it’s not going.

You can have the two operations in the same file. Just make sure they are different colors

But if the outlines of your continents are single path vectors, you will not be able to engrave them as lines. There may be something in this from the file that’s causing the calligraphic line in the preview.

I cleaned up the file, made sure it was just one path, no fills, no compound paths - did everything I could think of in illustrator, and I’m still seeing doubled-cut lines in GFUI. Any ideas? 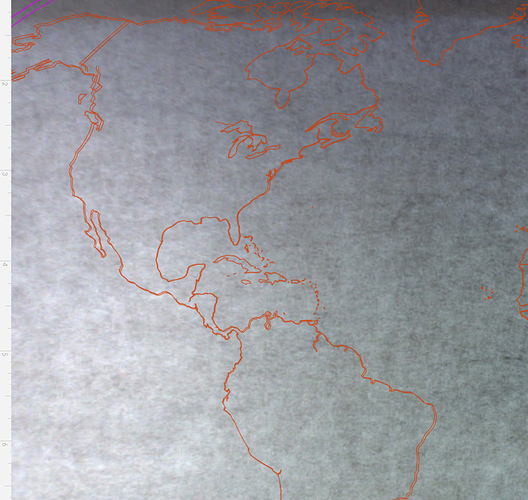 If you are comfortable posting actual avg file, it will be easier to figure out how to fix it. These weird, random issues have almost always been a quirk in the svg that is either hard to see or doesn’t show up in the program used to make it.

It would definitely help to post the SVG file, but zip it first before you upload it here. (Just drag and drop the zipped file onto the open post to upload it.)

Did it start out as a vector file or a jpeg? And do you want to engrave it or score it? (Different treatments in each of those cases.)

My intention is to have 3 operations:

Thanks for your help guys!

Okay, couple of things off the bat…there were a couple of clipping masks in there that had to be released and deleted…the GFUI can’t handle them yet.

If you zoom way in on the trace and switch from Preview mode to Outline mode, you can see the double cutlines.

From this, which is what it looks like in Preview mode: 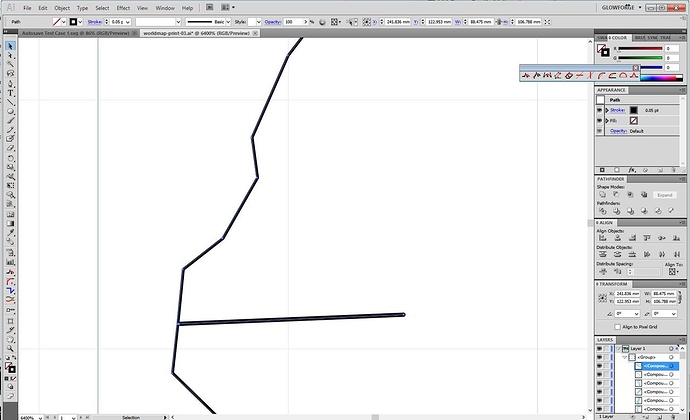 To this, which is what is actually going to cut: (Outline mode) 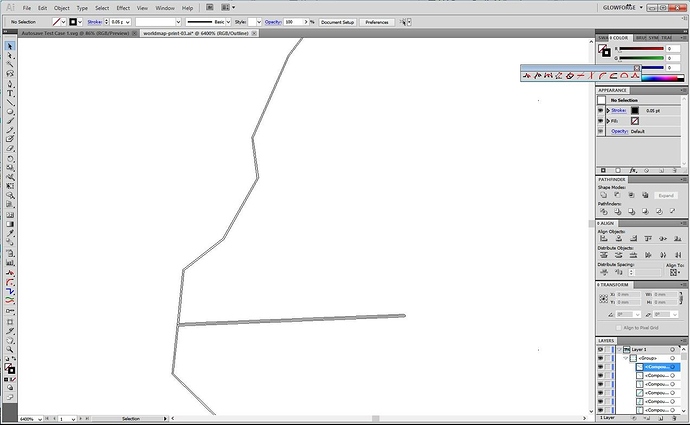 Did you want to score the continents? Or cut out around them?

If you want to score them, with all of the inside lines and whatnot, when you do the Live Trace, choose Technical Drawing and increase the Threshold to about 243 or so, and make sure Ignore White is checked. Expand that once after the trace and it should turn into single paths. (Check it by switching to Outline viewing mode.)

Give that a try and see if it works a little better. The ovals and end points are set up to engrave correctly.

Thanks so much for going through this with me. I always learn so much when you help!

Well, I hope it works…I’ve never actually tried one like that. Hopefully you’ll get a good single line trace. (Fingers crossed).

I did figure it out, got a great single line! This helped so much. Of course, I’m on to a whole other problem now, but you know, that’s how it goes sometimes.

I would maybe do some samples on smaller sheets until you have the operations working the way you expect. And go full scale when everything checks out.

Thanks so much for your help @Jules

I’m glad this has been resolved. If you have any other questions, please post a new topic or email us at support@glowforge.com.