In the last few days, I’ve started to see my first ever printing errors - by which I mean strange mistake or unexplained artifacts in the printing. Here’s a couple examples from pieces I still have in the office: 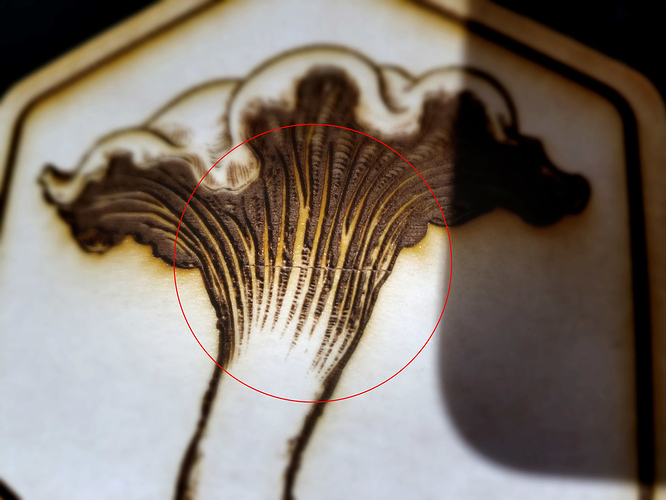 This is the error I’ve seen the most - maybe 5 to 7 times now, or about 15-20% of my prints. It’s, admittedly, a very minor imperfection, but obviously not desirable. It’s like the laser hiccups and doesn’t stop engraving for a second, creating “cuts” through the artwork. Sometimes the lines are dotted or shorter, rarely longer than this line, and once I saw 3 lines like this in one engrave. I’m reasonably certain it’s not an artifact in the artwork (and, yeah, the same files print fine other times). And to be clear, this isn’t image stitching or anything, it’s just one image, unsplit. 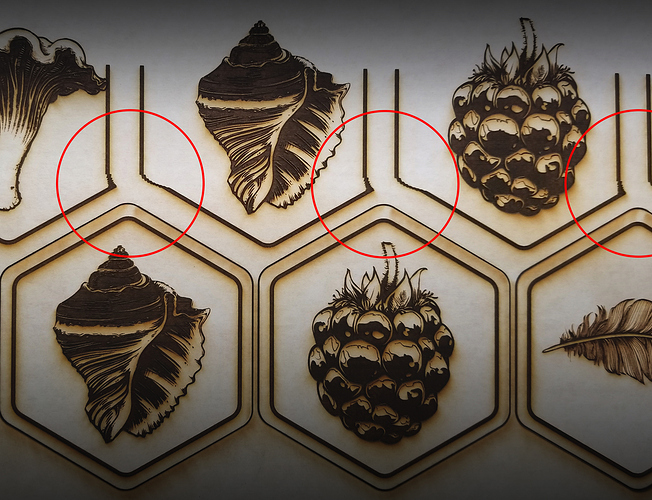 Clearly, this problem is much worse, since it ruins the project (and my precious PG!). I couldn’t find a like-issue in the forums, though I could’ve dug further. This has happened twice now, so not many times, but they’ve both happened within a week, and once on some coveted-last-piece PG hardwood I had, which sadly ruined it.

This picture is better than the other, however, because it took me awhile to notice it was happening again and so you can see more accurately what is happening. It’s like the head, at a certain line, starts getting out of alignment or something.

The two problems may not be related at all, except that I hadn’t seen either until very recently.

I can’t think of a cause off the top of my head, so thought I’d bring it here. Anyone seen this before?

This is one for Support for sure. You’ve got issues.

sucks… such a beautiful design too

The first one looks like a problem with the tube or power supply. Like your guess that it wasn’t firing for a while. Perhaps temperature related? If it follows a scan line with a lot of “laser on” the tube got a little long and attenuated the laser power. Though, I’d expect that to repeat.

The second one looks like a mechanical problem. A bit of horizontal drift to the right and then it stops. Like perhaps the head was hitting something at the end of motion to the left and losing a step or 5. It’d have to be at the very end of the scan line it just kisses the end so that the accelerometers don’t hit the threshold for cancel. Did your image have an extra pixel out to the left there or is there a washer stuck to the left side? Could also be a loose set screw on the motor shaft, I imagine.

Yes, I’ve been there done that. This is one for the GF support folks to handle for sure :-/

Oops. I’m upside down. It was engraving from the bottom up. So it was losing registration to the left. So if it was missing something and losing steps it would be on the right side.

For picture #2, I saw something similar once and the problem turned out to be that the material itself was moving slightly. I lock down everything with magnets now. Your issue might be something else, but I figured it was worth mentioning.

I agree, that would be the first thing to check. Make sure you engrave first, cut last

Yes, You’re right, moving material is definitely the most likely and simple to fix explanation.

In addition to the other suggestions - check the rails and wheels to make sure you don’t have dirt or something on them. When I clean the mirrors I always wipe down the rails too. If it hits some dirt it’ll hiccup until it can spit the dirt out.

Thanks for your input, everyone. I did consider the material had moved, and I can’t 100% rule it out since this project wasn’t locked down with magnets. It really does seem like the most likely problem when you look at the malfunction, even though I feel like I would have noticed that when removing it, but I’m going to start locking down everything, even well-fitting PG, with magnets, and come back if I see the problem arise again.

I’m so sorry about your prints.

I’m looking into what happened, but I’ll need a bit more information: