Hey all!
My Glowforge Pro is stuck on centering. When I turn it on or off it responds to that in the software and it focuses just fine. I’m thinking it might be a lid cable?
I just purchased one June 29th 2019.
Wondering if you all think that might be what is going on as well or if it could be something else?
If it is that any one had any luck buying extra cables to have on deck when it goes out?
thank you!

We have to guess on whether or not it’s the lid cable. (Glowforge can tell by looking at the logs I believe.)

But …if you are able to reboot the router, the computer and the machine, and get it to start working again, then it likely is not the cable, it was likely just a dropped signal from your Wifi.

If you can’t get it started again after turning everything off for a minute or two, (try more than once, a couple of hours apart), and if you have cleaned the lenses, then it might very well be the cable. You can send a direct email to Glowforge about purchasing one if you want to have one on standby, and they might be able to sell one to you if they have enough on hand. Or if you’re still under warranty, you can wait and see if the cable goes out before the term is up and they will replace it free of charge. (With slightly more delay.)

I did prefer to have one on standby, since I know my machine has the original cable design on it.
So I went ahead and ordered one. Haven’t had to use it yet. (They were able to sell me one since they had a few extra on hand at the time. But that was a while ago, I don’t know if they can still do it now. They’ll be able to let you know.)

Once the cables are replaced, we shouldn’t have any more problems with them…the new ones are a little longer where it counts, and don’t rub against the metal rim when people open the lid fully upright.

But again…according to when you ordered the machine, you might not need it. They might have started using the new longer cables in the machines by that time. So check the Wifi again before you buy.

thank you so much for all the info!
I’ll totally try that now!

What’s the behavior? Is the head moving at all?

The head isn’t moving at all. It will focus and when its supposed to move to center it doesn’t. I’ve also noticed sometimes it will switch from saying “centering” to saying “scanning” momentarily but still no actual movement.

What are you thinking?
Totally stumped but hoping it’s a simple fix!
Thank you!

I’m sorry, i completely misread your earlier post…did you buy a spare cable on June 29th, or buy your machine on June 29th?

Have you installed the spare cable? And is that the one having a problem, or is it the original cable?

no worries!
I purchased the spare cable on the 29th the machine I purchased around 4 years ago in the first round of crowd funding.
It’s the new cable still have the issue my old one (shorter one) I swapped it out as soon as I received it in order to get the machine running again for a similar issue

Ahah! Then it might be the cable again. (The older machines were affected by it, and i don’t know when they switched to the newer ones. They might not have had the newer ones in house by then.)

You might want to let them take a look at your logs first, but I’d probably just go ahead and order one of the new ones.

Let me ask this…when you open the lid fully upright (90°) does the cable you’ve got in there now rub against the metal lip behind it? (The green arrow in the picture below.) 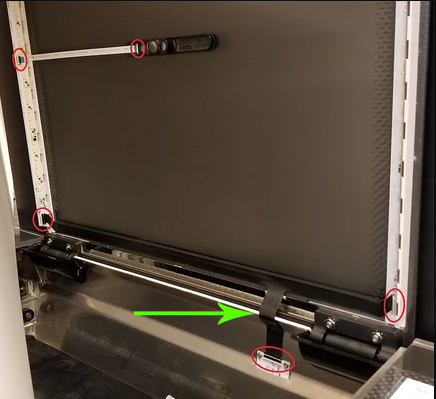 (I avoid opening my lid to the fully upright position to keep it from contacting that edge. I suspect that weakens the wires inside and they can break over time.)

I was told I got the new but it does look like it makes pretty decent contact with the hinge. How frustrating that they made me buy the old one again knowing it would do it again. I had issue with it not fitting across my machine width wise also they told me to just leave a gap or bubble to the side. That seemed really strange to me that I would get the new one and it didn’t fit correctly but I sent them photos and they assured me that it’s right. It all seems weird. 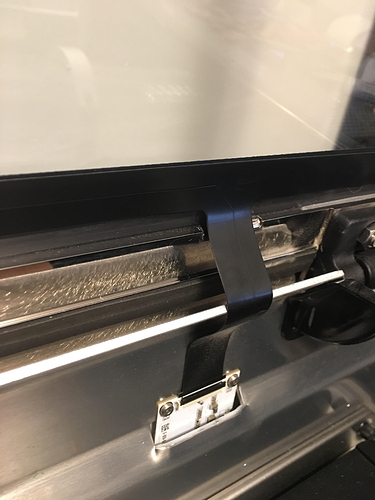 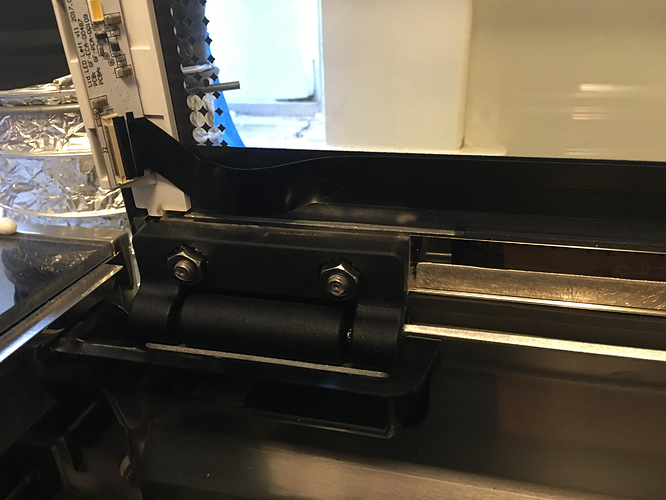 I wouldn’t stress over it, they might not have had any of the new longer style ones to send yet, and you needed something immediately…that’s why I asked about the date this all went down.

You might just need another replacement. Wait to see what they have to say after looking at your logs. (It might still be something else that we can’t see.)

I’m so sorry you ran into trouble! I appreciate you taking the time to do that initial troubleshooting. I see you already emailed us about this and we’re working on it there, so I’m going to close this thread.