I have a simple .svg file that I exported from Fusion 360. That one cuts correctly.

However if I open that .svg in adobe illustrator and modify it (say add some text), then when I save the .svg back out it’s mysteriously corrupted. The new .svg loads into the glowforge web interface fine, and even looks correct. However when I cut on glowforge mysteriously some portions of cuts are missing, cuts seem distorted, and in some cases brand new cuts appear.

Anyone else see this behavior? Pretty dumbfounded since it previews correctly. Is there some difference in how the preview code works vs. how glowforge actually cuts?

It could be a few things but they’d just be guesses without seeing what the file looks like.

I’m using the settings Jules recommended: Glowforge Interface - Correctly Save a File as an SVG for the GFUI 🤔 … works fine with the latest version of Illustrator.

Oh thanks for the quick responses and the pointer to the other thread. I haven’t had a chance to verify yet, but I had “Responsive” checked in my previous exports. I bet that’s what’s been hosing me!

Will report back. Thx again.

Responsive basically writes the file without a defined size so that it will scale up and down in a web environment.

Some cuts not occurring: this can sometimes occur in a complex file The user interface will basically render the on-screen view, but a complex file can take a bit longer to render in the background. If the file hasn’t completed processing and you hit print, it will send the file with only the bits that have been fully processed.

Cuts appearing randomly: this is also odd. Do you have engrave portions that you are also doing? Random lines are typically from trying to engrave open paths.

First I tried to redo the cut that had previously had a missing section. This time, it cut through everything correctly. Overall the .svg was quite small (attached file called “missing_piece.svg”). For whatever reason, it worked this time.

Then I tried another cut that had unexpected distortions (“test.svg”). That one cut correctly when it was positioned small on the cutting bed. But cut incorrectly when I scaled the svg up to the size of the entire cutting bed. When I turned off “responsive” in the AI save as window (“test_not_responsive.svg”), then it cut correctly in all cases. Note that in all the variants above, it previewed as I expected. Just cut incorrectly in some cases.

At the moment, I’m hopeful that 90% of the issues I’ve been struggling with relate to the “responsive” flag. Thx for all the fast responses.

The file names didn’t come through, so I’m not sure which is which.

Overall, and this will get easier as you get comfortable with Illustrator - the files need some clean up to be more optimized for processing.

The first SVG you posted (the top), came through really weird for me, which may be a result of the Discourse forum software stripping some stuff out of the document. Initially, it came through with just a few line segments having a fill and no stroke. I changed everything over to a stroke to see it all better; I’m not sure if this was designed in Illustrator from the get-go, or maybe a DXF from somewhere that you were bringing into Illustrator. All of the pieces are composed of a bunch of small lines. As for optimization and getting clean(er) results, I would go through and join those paths to make them complete shapes. Otherwise, you’ll have a bunch of stops and starts which means it has to pierce the material repeatedly.

On the second and third ones (I could look at the code to see which is responsive, but I didn’t), you have two different shapes laid out right on top of one another. If you are converting those to a cut, it’s going to make 2 passes - effectively a double cut.

I can see potentially where having a bunch of disconnected lines, and responsive being clicked, could lead to some potentially funky results.

The first SVG you posted (the top), came through really weird for me, which may be a result of the Discourse forum software stripping some stuff out of the document. Initially, it came through with just a few line segments having a fill and no stroke.

Yeah - one of the reasons these svg’s are weird is that I generated the paths in fusion via a cutting tool path and the glowforge post processor - which turns the path into an .svg.

My ideal workflow is:
-Build model in Fusion
-Automate layout of pieces to flat surface (this part is still very annoying in fusion)
-Generate cutting path and export to .svg
-Additional layout tweaks in adobe illustrator

you have two different shapes laid out right on top of one another. If you are converting those to a cut, it’s going to make 2 passes - effectively a double cut.

This one is from an image trace operation in AI and that’s why the path is doubled up. I left the extra cut in there really just to demonstrate how odd it is that the 2nd cut appears to overlap the first perfectly in the glowforge preview, but does not overlap it when the actual cut happens.

Maybe it’ll be useful for debugging down the road.

I can see potentially where having a bunch of disconnected lines, and responsive being clicked, could lead to some potentially funky results.

Yeah at this point that’s where I’m putting my money too.

I’m glad you’ve made some progress!

It sounds like unchecking the responsive flag got the results you were looking for… is that correct?

Regarding the doubled line in the design that didn’t cut in the same place, if you have pictures of the print results, and know the date and time you saw that, we’d be happy to investigate that for you.

Yup unchecking the responsive flag seemed to fix my issue.

I didn’t take a picture of the bad cut, but I did reproduce it multiple times over the last month (most recently last week). The svg is above in the thread, but because discourse seems to hide the filename here’s a direct link:
https://drive.google.com/open?id=1E60IskULqct1i91zE_i2s4pwNPgn1Tah

There are 2 overlapping, identical cuts in this file, and while they appear to overlap in the glowforge preview app, the glowforge cuts them quite differently when the cuts are scaled up large (approximately the size of the bed).

Actually… I spoke too soon. Seeing really bizarre cuts still with “responsive” off.

These are my settings from AI 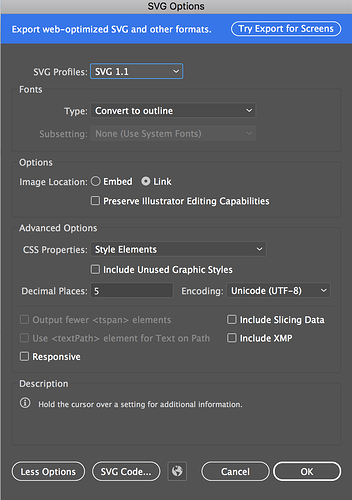 Here’s how it looks in the preview (bad photo but look in bottom right corner for the in progress cut): 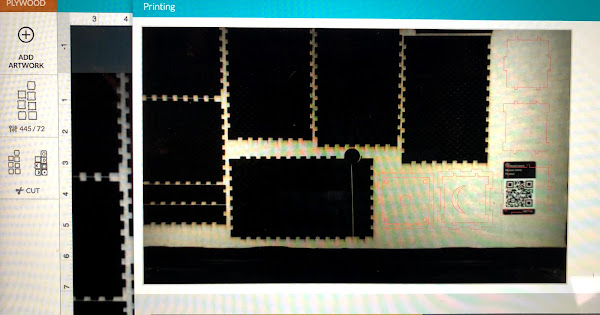 And here’s how it looks while cutting. It should be immediately obvious how wrong this is: 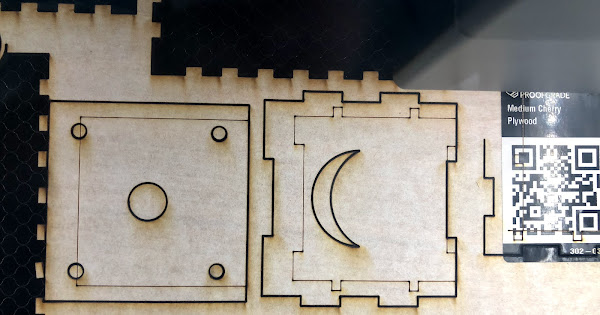 Note that the first time I cut this .svg was in draftboard and it was completely fine. This was the second time I cut it,.

Super frustrated (and wasting nicer wood now) so would much appreciate any insight here. Source .svg: 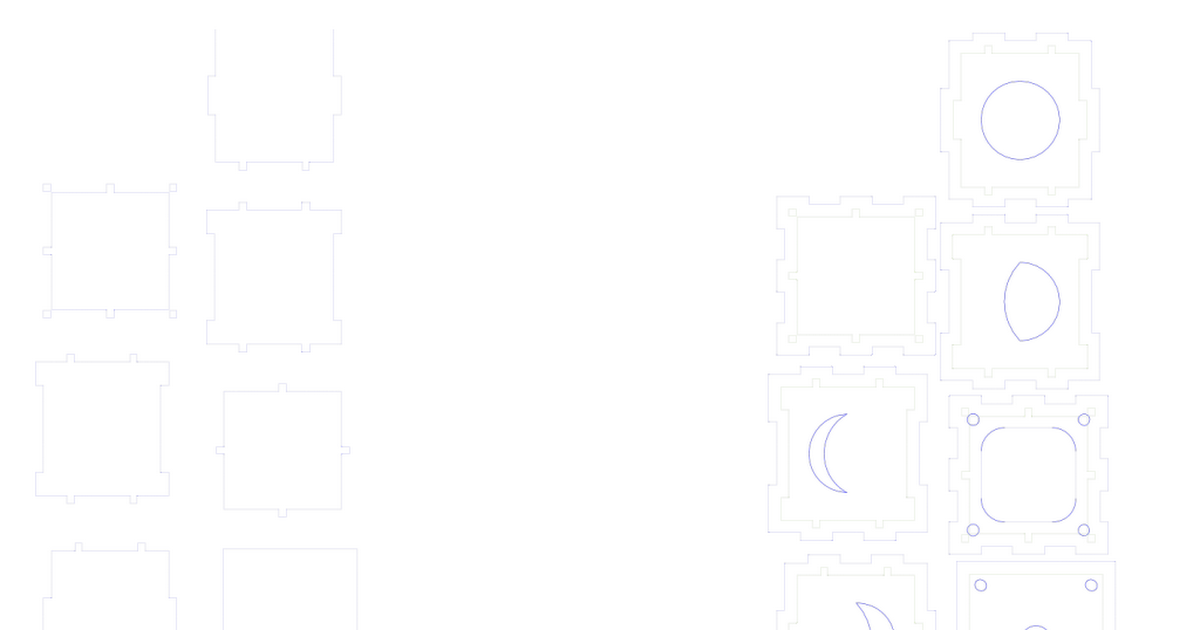 This looks like the “head bumps into the edge of the machine in the front-right corner and offsets all following cuts” problem to me.

Woah - that’s a thing!? Based on the fact that I only see this when cuts get close to that section of the machine (front-right) it sure sounds like a strong possibility.

I dug up this thread on it:

My guess is that GF is making software changes, with new bugs, and these are slipping through whatever QA process they have and getting out into the wild before they’ve been adequately tested. Just a guess. I’m seeing multiple threads with strange, never-before-seen behavior, and the only explanation I could come up with is new software bugs. I guess on the positive side, it at least indicates some forward momentum on the software front.

Sounds like it may be a hardware problem with my machine

@vee can you advise how I should proceed to diagnose this?

Thanks for letting me know. I’m sorry to hear that you ran into this trouble, too!

Could you please try the following for me?

Thank you in advance.

I’m following up because it’s been a while since I’ve seen any replies in this thread. I was wondering if you’ve had a chance to run the test above. If so, please let me know how it went. Thanks!

Thank you for following up! I actually didn’t have a chance to try out your test til earlier this evening - but it certainly exhibits the same behavior. I guess my initial post about .svg formats was a total red herring. 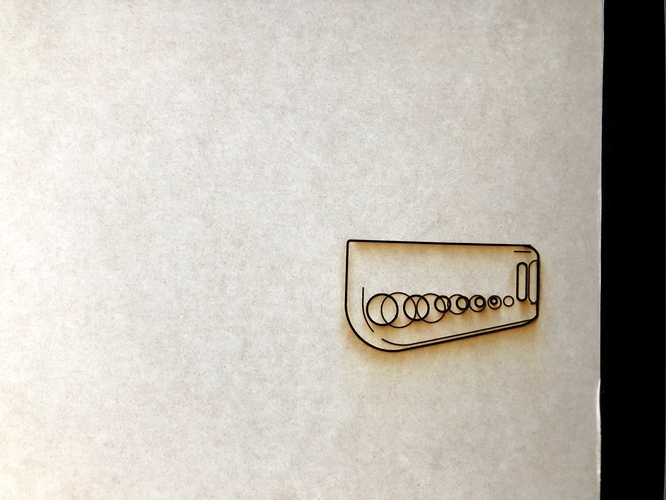 Any tips on how to resolve this?

Thanks for trying the test and providing the photo.

I’m looking into solutions, and I’ll be in touch when I have more information.

Unfortunately, it looks like your unit has an issue that we can’t resolve remotely. I want you to have a reliable unit, so I’m recommending we replace this one. I’ll be in touch via email to sort out the details. I’m so sorry about the bad news.