If it’s real silk you’re using, you could rely on an electrostatic charge to keep the silk attached to a charged surface. Doesn’t have to be a very strong charge for your delicate work, and you wouldn’t have to worry about any of the ‘sticky’ coming off on the textile.

Interesting thought. I’ll see where it takes me.

I think that while the silk thread would, indeed, be held down onto a surface, the effect of feeding the thread in a pattern over that surface may not be controllable. The surface would have to be an insulator to hold the thread where it was placed, but the effect of one section overlaying another, after following a finite path, seems to be unpredictable.

The ALS Society provided a product made by Dycem for me that should work for this, it is durable and easy to renew with a quick rinse. Having trouble copying the link, but it can be found in a Google search easily.

I don’t know if the size or tackiness of something like this would work. Just a thought. 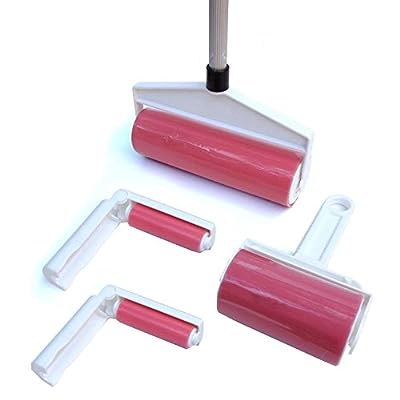 Sticky Master Tape-less Lint Roller - This amazing set of lint rollers makes it faster and easier than ever to clean up lint, hair, dust and more from almost any surface. The four-piece set includes a ...

Good thought Bill. I’ll look for that sort of product when I hit Corinth.
It will give me something to test with.
John

Thanks for the name of Dycem. Tracked them down in UK, so I may be able to grab some of their strips before I leave UK !
John

There’s probably something I’m missing, because I’m not entirely sure I understand what you’re making, but could you not just paint repositionable adhesive onto the wheel? Something like Aileens Tack It Over and Over (not sure their branding department is even trying). They also make really nice fabric glue too, but don’t buy that accidentally or your will glue everything to everything, fabric or not.

Anyway, you paint it onto the surace you want to be sticky, and let it dry completely. Then anything you touch to it will tack in place and remove with no sticky residue.

It wouldn’t be permanent-permanent, though. But that’s everything tacky. Because its tacky. Stuff sticks to it and stuff isn’t tacky. Depending on the wheel material, you could just wash off the little fibres that stick to the surface over time and make it less sticky. Or just paint on a second coat. Because that’s way easier than washing things.

Aileens Tack It Over and Over

Erin, your link reminded me that I have a low tack adhesive spray.

I think I’d better try that, before life gets more complicated.
Thanks,
John

Erin, your link reminded me that I have a low tack adhesive spray.

I think I’d better try that, before life gets more complicated.

Funny how that works… I use low tack spray adhesive almost every day and didnt even think about it til @erin’s post. LOL.

3M also sells repositionable adhesive on a roll with release liner, so you can make things self-adhesive.

They make a spray tack adhesive for tshirt printing plates. I had a can of brush on years ago, but the kids are using aerosols these days.
For that matter 3M spray adhesive would be similar and easier to find 77 is medium and 90 is high bond I think.

Are you willing to go into more detail about what your end goal is? I guess what I mean is: if you’re trying to solve a problem, can you go into some detail about the problem you’re trying to solve? Is there not a machine that can make this kind of lace, and you want to invent it? Do you need a bunch of this stuff and you just can’t get a-hold of it?

I’m not a knitter or a crocheter, but is the pattern you’re trying to make called “broomstick lace” by chance?

Hi Hirudin,
I’m not clear on what more I can add to either my op, or the subsequent postings.
The photo shows the size of the edging, and while it does have some similarities to broomstick, or hairpin lace as it’s also called, the approach that is shown in your video is just not practical.
I’ll stress that I’m looking for an economical way to re-create this edging in quantity - tens of yards at the minimum, and it’s only 5mm wide and is made of the finest silk thread.
I’ll have to create my own machine to make it, as there appears to be no current knowledge on how it was produced in the first place.
The consensus among the experts that I have consulted is that it was almost certainly hand made.
John

Oops, sorry, I see you already explained that. Clearly I saw the photo, but I ignored the text somehow. Sorry again.

That’s fine. I do it myself, often

I think it’s made of this stuff: https://www.inventables.com/technologies/suction-cup-tape

I’ve used it to stick things to my desk that I don’t want shifting around (smartwatch charger stand, wireless headset base, etc.) and it really does work as advertised.

Cool! thanks, good to know. think I might pick some up… I wonder how much this forum has boosted the economy