This is pretty crazy.

https://pockit.ai/ if anyone else wants the direct link!

You do find the coolest things!

Yeah I signed up too. It’ll probably be expensive but it’s fairly innovative. Ambitious projects like this are a mixed bag, we’ll see what it turns into.

I could control the world from anywhere with this - or at least another lamp or two. I have no use for such gadgets, but I really want this to become a reality that appears in my mailbox one day.

looks like it’s based around the ESP32… I have about a half dozen of those sitting around here. hrmmmmmmmm.

This has come soooo far since I saw anything on it. Thanx for sharing.

That’s a Raspberry Pi CM4 module on a carrier board that adds looks like something I’ve seen advertised in order to make the CM4 (which is a stripped down Pi4) in to something more like a Pi4 module (IO ports, USB, SD card, etc). I didn’t watch more than the first minute or two to see if there were any ESP32s or similar shown any place else.

Not to be curmudgeons about this, but it’s kind of gimmicky IMO. It doesn’t look like a practical computing appliance to me. The components appear to be all off-the-shelf stuff, just packaged cleverly. It’s big “feature” is that you can reconfigure it without soldering. Maybe a good STEM thing for kids looking to learn about electronics and computers, if you can’t trust them with a soldering iron. But whatever you could stick together with magnets on this thing, you could solder together with the same parts at what would undoubtedly be a much lower cost… 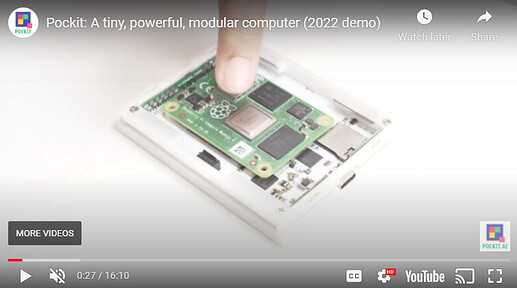 Spoken like a person for whom wires and soldering comes easily

. The components appear to be all off-the-shelf stuff, just packaged cleverly.

While we won’t know how well it gets implemented until it is in some people’s hands I have to disagree with you on principle.
I can hear someone saying this about the original Arduino in my head. “It’s just a ATmega168 with the crystal and an unnecessary bootloader”.

Very cool, but just something that has lots of small pieces that I would lose!!

Sure, but the automatic nature of it recognizing components is pretty great, and the UI work is top notch. This is one of these things that I view as inspirational beyond the original project, a push forward in adaptive hardware integration. Take home automation for example… I find almost all of the solutions I’ve seen to be confusing and hacky. Make a home automation system like this that has a central dash that can handle hot swapping devices into and out of the system and I’d be a lot more interested in the concept.

Maybe I’m not up on it and homekit and its ilk have gotten easy to use, but this sort of automated system for managing smart home components would be a big win for me.

“ah, a smart outlet came online. Is it attached to a lamp? OK, cool. are there other lamps in the same room? ok cool. Any motion sensors in that room? Great… now lets make it so when the motion sensor hits and it’s dark out the lights all automatically turn on”

Some ui work to customize if you like “oh no, make it so the motion sensor just turns them off if there is no motion after 20 minutes” or “only turn the following lamps on with this motion sensor” etc…

Anyway, simple and automated but still flexible is a tough balance to strike. This demo looks like it’s walking that line very well.