I wanted to try out the different engrave options for a project I’m doing. I figured I’d share my results.

Here is the file I’m using. I made it in inkscape, then saved it as a PNG because there were way too many overlapping shapes.

Here are the three engrave types.

Overall, they are very similar. The “Map grays to power” is fairly flat, which isn’t the best for trees. I’m thinking I’ll go with one of the dithered options, to give them more texture.

Thanks for that–I’ve been wondering.

I think you will see a much larger difference between the dithering options if you engrave a photo. One of the key reasons to use dithering is to avoid banding and flat spots in gradients.

I’m likin’ the Ordered Dither too.

The “Map grays to power” is fairly flat,

You need more variance in the grays within each tree for “map grays to power”, I believe. Since it’s uniform gray for a whole tree, it will be flat. If you had variance, for example, a black and white conversion of a tree, where the front leaves were lighter than the back leaves, you’d have more perceived depth.

I’m going against the majority and say the Floyd-Steinburg shows more of a 3d effect imo.

I think, reading between the lines, black will be 100 on the precision power scale, which is less that full power.

I’m going against the majority and say the Floyd-Steinburg shows more of a 3d effect imo.

From the setting you have available, it appears that you set the max power and speed, then set what the min power will be. I’m assuming it will scale appropriately from there.

@palmercr, it seems like you can set it to Full Power for the engrave, as well. 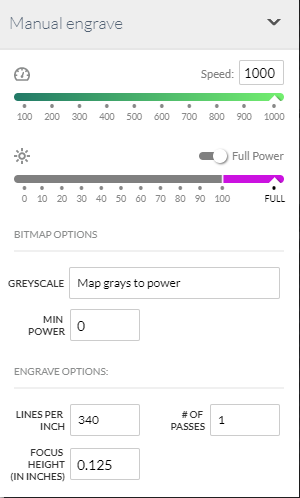 It is very confusing then because we are told there is a gap between 100 and full. If it can give 256 equally spaced levels ending in full why then is there a gap when not raster engraving?

It would be interesting to set min to 100 and max to full and see what a linear grey scale looks like. Or GF could just document what the controls on their machines do in the manual instead of us having to guess or reverse engineer it.

ah, excellent, that’s what i was hoping to hear! cheers, thanks.

Overall, they are very similar.

Very similar on wood. Try those same patterns on black slate or granite, and you’ll see a far more dramatic difference between the three modes. This is because stone is a far more ‘binary’ material to work with, so you should see the pixel patterns much more pronounced in either Floyd-Steinburg or Dithering. If you try Map Greys to Power on stone, I don’t think you’ll see a very dramatic effect.

Edited to also add - It would look even more awesome on https://alumamark.com/