As you can probably guess from my multiple other posts my wife is in law enforcement and I tend to make, or trial and error I should say, things for her because I know others will appreciate it. I had seen a challenge coin flag on Inventables, and had originally designed this for that purpose until right before production, when I realized the size I had made would not allow room for the coins. I haven’t given up on that project but it has been pushed to the back burner. So rather than scrap my idea, I decided to see what else I could do with a TBL flag. Wouldn’t you know it, their oath with name stacks perfectly into each white stripe section. The name was removed for safety.

I decided I wanted to use frosted acrylic rather than white because I wanted a more subtle look rather than the sharp contrast. However I’m not pleased with how the frosted turned out so I’m recutting those. I engraved on the clear side rather than the frosted think it would be a dark enough frosting to so through. It’s too clear and shiny to really tell that the back side is frosted, so I’m going to do the reverse and engrave on the frosted side. I’m also not going to spray paint the letters this time because the edges of the acrylic caught a little. You wouldnt think it matters that a little paint got on the edges since it’s being glued together with Weldon 4, but that small amount of paint turns to liquid too and oozes out on one side of the other. This was also a good learning experience for using the Weldon in the top three stripes since it’s a solid piece of black and the frosted slides into it rather than push joining like all the other stripes. Still trying to figure out the best approach for that, and I’m getting better at controlling the flow of that watery glue coming from the syringe.

My kerf for the stars was probably almost dead on, but since it was cut on the clear side and I went ahead and flipped them to the frosted side rather than cut them again there were gaps (not all programs create stars symmetrical apparently), but enough weldon will make it stay put. 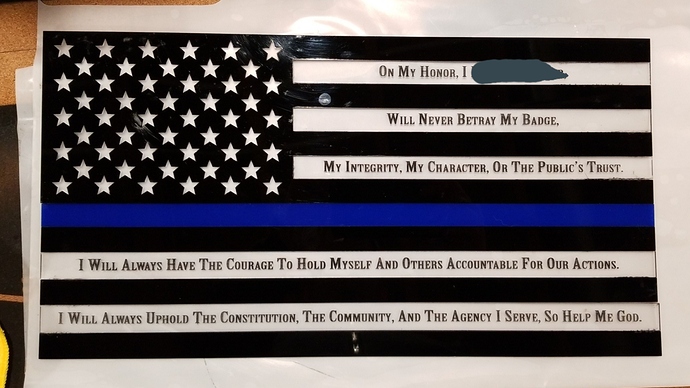 It looks extremely frosted in the photo only because I slide some scrap clear paint protectant film underneath to get an idea and see if I should just wrap the back in vinyl instead of cutting it all over.

Also thinking of making a border frame or base in wood, but not sold on that idea yet.

That looks great! Thanks for the support!

This makes such a nice piece. All her colleagues are going to want one!