Things I find in my parents' house

I was pulling the vacuum out of its closet yesterday when I happened to look up and noticed a little cubby hole I hadn’t seen before. I haven’t climbed up to look into it yet, but when I reached up and felt around (not always advisable here in Texas, but I was feeling reckless) this is what I found: 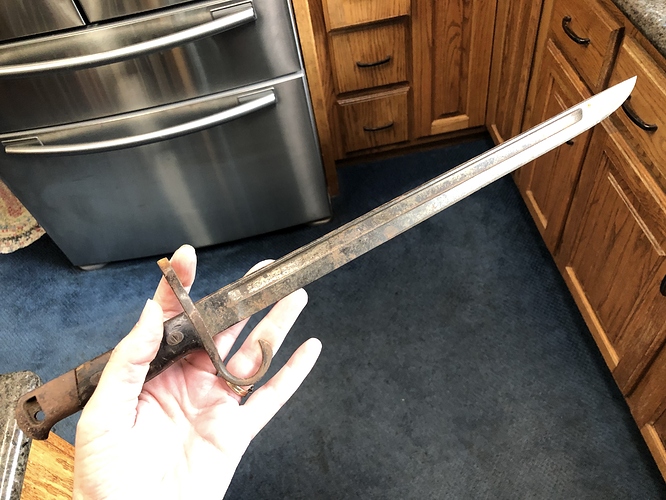 Google says it’s an antique French bayonet. I’m guessing it came back from Vietnam with my dad.

That’s interesting. Yeah look before you reach, coulda jabbed yourself.

Or grabbed something that was moving…

Or grabbed something that was moving…

Or BEEN GRABBED BY something that was moving!

Wow, nice find. Clean that up and use the 'forge to make a nice display stand.

Clean up and use as a letter opener!

Good idea! Best way to remove rust without causing damage? (I can ask Pinterest, but I trust y’all more!)

I did a quick google and found this. It sounds promising:
Rinse the metal item and shake dry. Dust with baking soda (it will stick to the damp areas), making sure to cover all rusty areas. Leave the item for an hour or so, then scour with steel wool or a metal brush, removing the rust down to the metal

Damn, I NEVER find treasure around the house.

Well, the damage is actually already done. Some of the steel has oxidized into iron oxide and so as such no longer exists as steel. You can remove the iron oxide easily enough - rag and WD40 You will be left with a black coloured stain in the corroded areas. If that does not bother you and you like the patina of the steel, just stop there. If you want to remove the stains you’ll need to get a bit more aggressive with maybe some steel wool or 3M Scotchbrite abrasive pads.

If you want to go “As New” and don’t mind losing the aged finish you could sand and polish it.

Just don’t cut ya fingers off y’hear? If it is your Dad’s you could engrave it?

It’s not very sharp; I don’t think it would cut me even if I tried.

I’m waiting to hear back from Dad re: its story!

The garage is probably what military personel would refer to as a “Target Rich Enviroment” so yes, I bet there is some WD40 there.
The don’t cut yourself warning is in deference to the “Safety Weanies” clogging up our world; in Texas I doubt people worry about cuts less than an inch deep.
Is there wood on the handle? - hard to see. Could be a nice engrave on that…

I found a similar one in a garage after I moved into a house. There is a marking on the base of the blade, right above the quillion, that indicates it is Japanese. From my limited research, anyway. Very cool.

It’s not meant to be sharp, it’s a stabby weapon, lol
There’s a product called CLR, available at Walmart or any hardware store. Cleans rust very well without damage. Smells very much bad, though, you may want to use it outdoors.

There is also this stuff called Evaporust. I haven’t used it but, have heard it makes rust removal very low-effort.

I’m stuck with whatever I can find on-site – which, thankfully, isn’t a narrow range of stuff overall. I have to find a sugar cookie frosting recipe for Gkid, and then I’m going to dig around and see what my options are!

Cleaning / removing rust from a valuable antique can potentially greatly reduce its’ economic value, if that is any interest to you.

if that is any interest

Turns out it was promised to my youngest back when he was too young to be trusted with sharp weapons, so I’m going to leave it as-is, since I think he’d prefer to do any restoring himself.

Also, it’s Japanese, not French. Hubs checked Google again and it had changed its mind.

On mine, only the first 6 inches or so has been sharpened. Yes, it’s primarily a stabby-stab, but can be used as a slashy-slash. The unsharpened part is used for parrying. Sorry, if I got too graphic–but I did tone it down significantly from bayonet training in Basic 25 years ago.

What makes the green grass grow?

Late to this party too but rus can cause more rust, oils can retard it but the only real stop is phosphoric acid. On the other hand oiled patina works for light rust.