This is pure hand typed CSS

This is flat astonishing if you know anything about css and html. 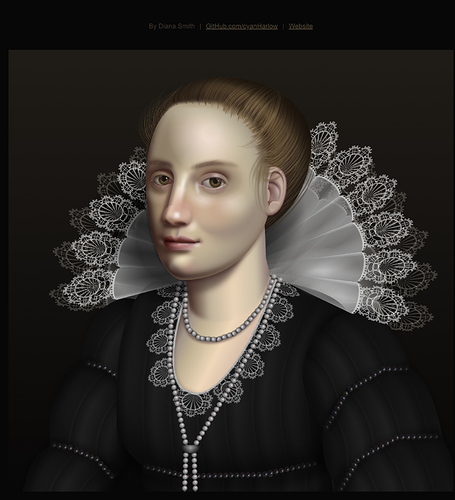 An ongoing series in which I create art using only CSS and HTML. Made for Chrome.

I don’t even know what to say.

I browsed her web page and I am in awe. The combination of engineering and artistry is wonderful.

Dang. And I was so proud of the ASCII bluebonnet I painted once upon a time…

I’ve seen stuff like that before, but this one is really clever, not just cheating by machine-generating CSS that replicates pixels. I didn’t realize there were CSS constructs that act more like SVG.

Some folks brains work differently from others, To make a long and complicated story I met a man for a few minutes who was partnered to another that I knew a bit better but by his story machine language was more straight forward than LISP was for me so even something as simple as sending something to the printer he did in machine language.

They were working on inventing anti-virus when the partner walked in and the 25yr old was dead of a heart attack a month or so after I had met him, I knew the elder partner had been around spooky folk and don’t think obvious questions were even investigated but it was a year or so later that commercial anti-virus was available.

It would have been interesting to see what artwork such a mind might make but I notice a certain eclecticism in her subjects.

Surprisingly compact of you look at the combination of HTML and CSS.

Needs to done in WebAssembly next!

That is awesome… thanks for sharing!

And I thought I was pretty good with css… I wouldn’t have even thought about creating something like that with css.