I have an order for some engraving on some stainless steel. (whistles) I have noticed that the Cermark (while awesome) can scratch off. Any suggestions on making it more durable?
Thanks guys!!

Really?
While I haven’t used Cermark, the tests I have done on stainless with and without vinegar put down an oxide layer that is really tough. My finger nail won’t touch it, and rubbing with a non-edged tool burnished it. I’m sure an edged tool will scratch it off, like it would an anodized deposit on aluminum.
I suppose you could clear coat it.

Another thread on cermark noted that when they increased the lpi beyond a certain point, it became easy to wipe it off. Perhaps you can over power the stuff? That is, at a certain heat it creates an oxide layer, past that and you burn it off again (though the charred remains stay behind tantalizingly looking permanent until you wipe it off).

Or maybe the reverse? Low enough power causes discoloration of the cermark, but hasn’t done much to the fixed material?

Has anyone ever figured out the active ingredient in Cermark? Could we homebrew that stuff?

Do a search on moly-lube.

I picked up some small Cermark Tape samples at the NBM show I attended. May be easier on small items like whistles (and less messy than spray) . I’ll have to try them with my

Thanks guys. Yeah I’ll try reducing the LPI. Hopefully that’ll do the trick!!

Yeah I’ve seen the threads about moly lube. Always assumed it was a hack, and not really an analog? Are they the same stuff?

Don’t know if it’s the same stuff, but I’ve used it and gotten good looks in initial tests. Going to do some more with it as well and will let people know.

Another thread on cermark noted that when they increased the lpi beyond a certain point, it became easy to wipe it off.

Yes, if you burn it too hot, it will not bond to the underlying material, and will come off quite easily.

You can also increase speed or decrease power. You can also try 1, 2 or 3 coats, if you’re using the spray version. I’ve found that 2 coats of spray–giving each a few minutes to dry–at somehwhere around 600/Full gives me the most consistent results on aluminum. I have not yet tried stainless.

This is a really great video on the different products, cost comparison, durability etc. Totally worth a watch.

I don’t know if they’re the same stuff. I did a quick web search and didn’t see anyone claim they were the same stuff. It’s more like someone figured out they could mark with moly lube and it spread virally from there. Given how some posts here have shown interesting results with wet paper towels, it’s all probably very alloy dependent.

youre telling me you put plain old vinegar on stainless and lasered it and that worked?

I think it was mustard. Do a search for mustard.

Someone did just plain wet paper towels too I think.

EDIT: yup, I searched “wet paper towel” and got:

Etch Steel with... apparently you only need a wet paper towel. No mustard or vinegar. lol Made on a Glowforge

After posting about Vinegar and Mustard (Both Mustard & Straight Vinegar INDEED etch stainless..perfectly! See ya Ceramark) etching steel we made a rather amusing discovery. Seems my use of the paper towel was actually more of a discovery than the acids. Thanks to @jgf making the simple attempt to use a plain water soaked paper towel as a control, he found that the results were JUST as good as with vinegar… no acid needed! I guess it prohibits the reflection and maybe the moisture helps… Anyon…

@chriskeilbart (tagged so you don’t miss it)

yes! It was the link @evansd2 posted where @rubbersoul79 blazed the trail.
I just wet a paper towel scrap with white vinegar and blazed away. The paper towel kept the surface wet. Worked pretty well. Full/fast setting. 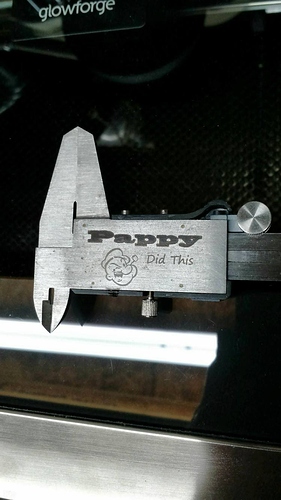 I have been MIA for months and I am FINALLY going to be able to start playing with it again. I am still so disappointed with the alignment of the camera vs where it actually cuts. I kept thinking it would be fixed by now!