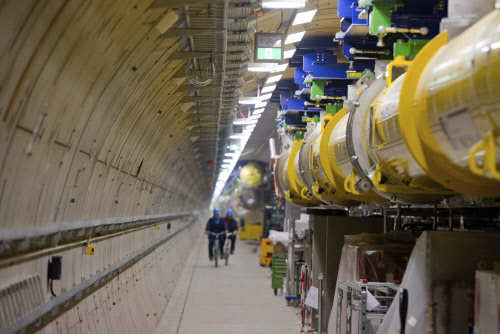 The laser will allow scientists to get a glimpse of new materials, drugs and chemical reactions at the atomic level. The 3.4-kilometre-long European XFEL is mostly located in underground tunnels in Germany.

BERLIN: The world’s biggest X-ray laser has generated its first beam of light, that will allow scientists to get a glimpse of new materials, drugs and chemical reactions at the atomic level.
.

.
The 3.4-kilometre-long European XFEL, most of which is located in underground tunnels in Germany, will usher a new era of European research, according to scientists.
.

.
The X-ray light has a wavelength of 0.8 nanometre - about 500 times shorter than that of visible light. At first lasing, the laser had a repetition rate of one pulse per second, which will later increase to 27,000 per second.
.

.
The achievable laser light wavelength corresponds to the size of an atom, meaning that the X-rays can be used to make pictures and films of the nanocosmos at atomic resolution - such as of biomolecules, from which better understanding of the basis of illnesses or the development of new therapies could be developed.
.

.
“This is an important moment that our partners and we have worked towards for many years. The European XFEL has generated its first X-ray laser light,” said Robert Feidenhans’l, Managing Director of the European XFEL.
.

.
“The facility, to which many countries around the world contributed know-how and components, has passed its first big test with flying colours,” said Feidenhans’l.
.

.
“We can now begin to direct the X-ray flashes with special mirrors through the last tunnel section into the experiment hall, and then step by step start the commissioning of the experiment stations,” he added.
.

.
“The first laser light produced today with the most advanced and most powerful linear accelerator in the world marks the beginning a new era of research in Europe,” said Helmut Dosch, from the German research centre DESY.
.

.
“The European XFEL will provide us with the most detailed images of the molecular structure of new materials and drugs and novel live recordings of biochemical reactions,” said Dosch.
.

.
The facility will enable research into chemical processes and catalytic techniques, with the goal of improving their efficiency or making them more environmentally friendly; materials research; or the investigation of conditions similar to the interior of planets.
.

.
The X-ray laser light of the European XFEL was generated from an electron beam from a superconducting linear accelerator, the key component of the X-ray laser.

The German research centre DESY, the largest shareholder of the European XFEL, put the accelerator into operation at the end of April.

.
In a 2.1 km long accelerator tunnel, the electron pulses were strongly accelerated and prepared for the later generation of X-ray laser light.
.

.
The European XFEL is the largest and most powerful of the five X-ray lasers worldwide, with the ability to generate the short pulses of hard X-ray light.

.
With more than 27,000 light flashes per second instead of the previous maximum of 120 per second, an extremely high luminosity, and the parallel operation of several experiment stations, it will be possible for scientists investigate more limited samples and perform their experiments more quickly.

cool! thanks, somehow I missed that one!

So what’s the z-depth? Does it have a rotary attachment and a hard 0,0? Will it require internet access to operate?

And what kind of safety glasses will we need for the Glowforge X(-ray)?

a few inches of lead should suffice

When is the XFEL Pro coming out?

How do I defocus this laser and what LPI will work? Can I laser rice with it?

Will the 3.4km tunnel be provided or will I have to make or source one locally? Will it be CE and ULC certified?

When is the XFEL Pro coming out?

I hope it comes with a pass-through tunnel.

I hope it comes with a pass-through tunnel.

Good point – for all our projects longer than 3.4 kilometers…