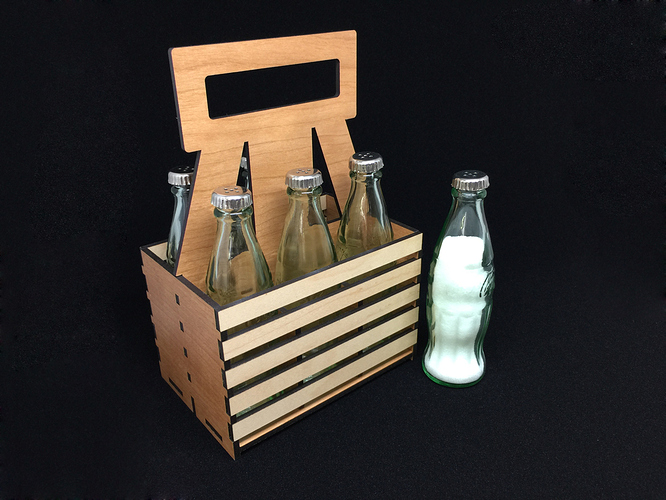 Yeah, this one came out as intended, but I’m trying to write a fully parametric version in Fusion 360 and I keep cratering the structure! I could try for something that didn’t slot together from so many directions, but the only thing that makes me dig down harder on something is to continue to blow it. (At least I’m learning a lot.)

Failing just means you’re learning at an accelerated rate. I salute you. Failure at my house usually results in a Rapid Unscheduled Disassembly. One of the first things parents say when they drop their kids off to play with my son is “Why do you have so many fire extinguishers?”

You haven’t failed, you’ve learned several ways not to do it!

Edison is good. Much better choice than say, Robert Oppenheimer.

What did you fail with an A+?

I can’t seem to get it parameterized. (I’m trying again.)

Just when you think you have it all right, you change one value and it all goes askew.

I feel you Jules. Our relationship with parameters is a love hate thing. It is VERY hard to think of all the ways things can go wrong.

Turns out you’ve got to be reely reely careful to not leave off your constraints when you’re working with lines instead of rectangles, because what looks like it might be a horizontal line isn’t necessarily.

Looks good - Keep at it! I nearly lost my mind trying to design parametrically >_<

A really good rule (best practices) is to not leave the sketch until it turns blue. (fully constrained)

I believe i will probably turn blue before it does.

@Secret_Sauce visited me and is a really nice guy, you could hit him up!

I’m waiting on the next training sessions with great anticipation!

You got a visit?! So jelly!

Waaaaay cute! Are those salt and pepper shakers? Great way to test the parametric design without chewing up too much material!

If you want to nerd out even more:
Pink/Magenta = projected geometry (either from other sketches or your 3D model)
Green = geometry that is manually locked/fixed

I’ve wondered about the magenta, thanks, now I need to find a lesson on the green!