Two large cuts this weekend failed to cut all the way through, on proofrade medium maple plywood AND camera alignment issues

I have been using my glowforge for about 2 weeks, maybe 15 hours or so print time so far, so I doubt its a cleaning issue, but I will clean before my next print.

Unfortunately, that does not help me save the sheet of PG maple ply that was effectively ruined by this recent print. Draftboard works fine, because it doesnt have the thin veneer, and the top layer is cutting fine, but the back layer of veneer is having trouble at times. 3 separate pieces of PG maple ply have had the issue so far, the first time I did not take any pictures because I had only had the machine a day, and I didnt think of it. Also, the cut was so close to the back that it was able to be popped out with a little force, but still cleanly.

These past 2 were not so lucky, On one, they ripped the veneer as they came out, ruining the pieces. On the other, they cut was so weak and the pieces so thin that they were effectively just scored and could not be removed at all.

Also, my camera does not seem to be perfectly aligned from cut to cut, so if I try to run the same cut again, even if I do not move the wood at all, it cuts slightly askew, preventing an additional pass from helping. (I noticed this issue with the tracing function too, it will cut or engrave the correct image, but not directly on the trace, which seemed wrong, but I had hoped it was just a 1 time calibration issue, but the issue persists after multiple days of turning the machine off for the night and re calibrating the next time I use it.

Edit: Forgot to upload my pictures. 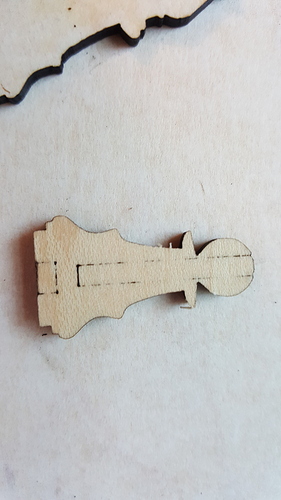 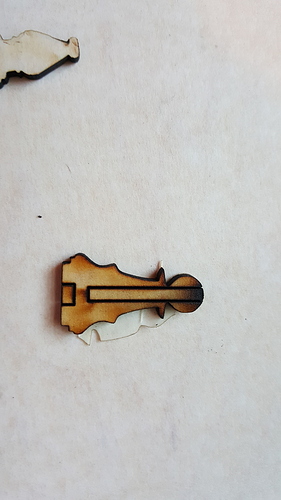 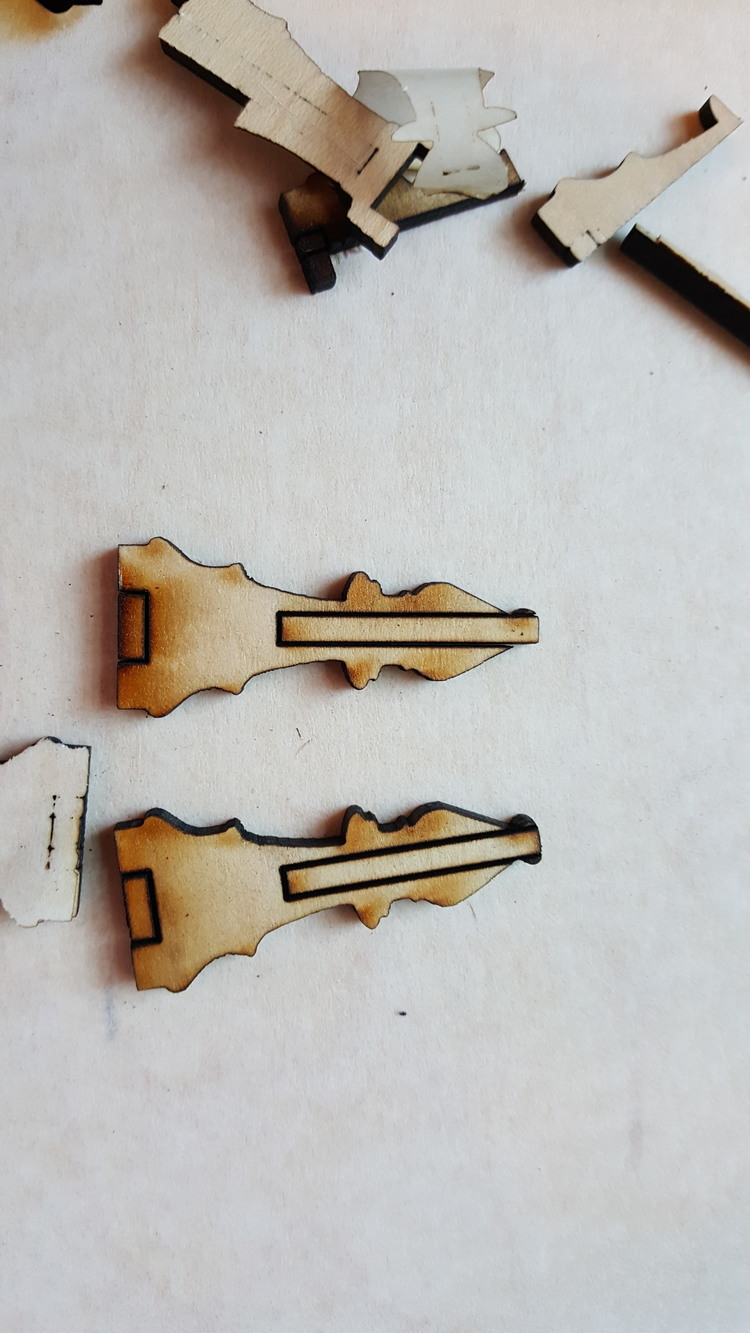 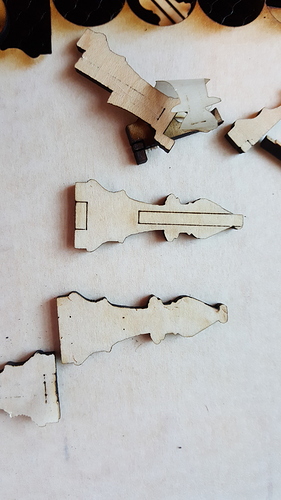 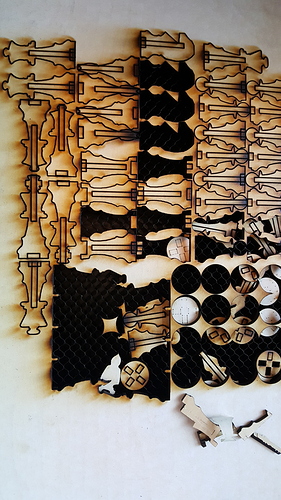 You verified the PG wasn’t warped? When I put a sheet in I tap it in several places to make sure it’s not bowed in the field anywhere (& if it is I’ll drop a magnet there to flatten it down).

Also was the UI set for the correct material? I believe there are differences between the different flavors of PG Ply - Maple is thinner than Cherry (in my stock).

Also, my camera does not seem to be perfectly aligned from cut to cut, so if I try to run the same cut again, even if I do not move the wood at all, it cuts slightly askew,

The UI will show a shift but the cut should be perfectly aligned on top of the previous one.

So, the UI shifts, but the image does not? (or rather, should not…in my experience, it still has, i tried to rerun it on something that definitely did not move and it was not on the spot, but I can try again to ensure.)

But that would mean that lining something up on the UI certainly wont work, right? So thats why the Trace feature wont work correctly? And if that is the case, never will, huh?

The bed shot taken after the print tends to show a shadow that makes it look like a cut has shifted a lot more than it actually has. Also that second bed shot can be off, and if you do not move the image on the screen of the computer, and do not move the material on the bed, and send a second print, it should duplicate the cut in the exact same place that it did before. The secret is to not allow the material on the bed to shift at all.

If you need to check to see that something has been cut all the way through, you can use a pick to lift it at an edge without letting the background material move. (i like to tape it down on one side.)

It should cut in exactly the same place once it has cut there once.

Mine did not. In a different attempt, i taped paper down to test paper
cutting, and my first attempt didnt go all the way through. The paper
stayed taped down, the UI was not touched, and the next print was about
1/16 inch off from the original. The only thing that moved would have been
the lid and thus the lid camera. That wasn’t my main concern yet, but
perhaps it should be, as if it worked as you say, id have been able to
save this project instead of losing almost 2/3 of a sheet.

You might want to do a couple of small test cuts in the same place on one corner of your sheet of testing Draftboard, just to see if it is a problem with the camera or a problem with the thickness setting not carrying over to the second cut on the unspecified material. (paper)

I haven’t seen it happen in a while, but it didn’t used to carry over. Might be a bug they need to look into.

Or it might be a problem with the machine. The test cuts and the results will be something they can look at to give them more information. (And it needs to be on the PG. Just cut a little 1 " square in a corner.)

So you are saying that once a project was in the UI that you pressed print, didn’t touch the material, didn’t move the design in the preview pane and then hit print again and the two cuts were not in the same place? The lid camera has nothing to do with where the cuts are once the project is in the design space. The two cuts should be dead on. Zero displacement from themselves. Yes the camera image might show it off but the cuts should be precise.

No, i am saying all of that, but with a lift of the lid between the first and second cuts. not touching the material, just lifting the lid, putting it back down, and cutting again.

Then something is wrong. If you take a simple square for instance. Cut it. Don’t touch the material or the design in the UI in any way. I could cut the same square a hundred times and hit the old cut line precisely. The camera image and the lid up and down has zero to do with where the next cut will be. Lift it as many times as you want. This doesn’t match what others are seeing…

Yeah, ill try what Jules said above. This particular case we are discussing now is not the same one I posted about in the OP. So I will do some testing for the camera and cut consistency issues and make a separate thread for that. The initial post was about not going through the PG wood and ruining a sheet with PG settings. What can I do about that? Certainly do not want that to happen again, considering the cost of PG materials.

What can I do about that?

Oh heck, I got side tracked…for the early Beta maple, I use a speed setting that is ten points slower than the default. The maple tends to have a harder veneer on it than the walnut and cherry…it’s just a hair thicker.

(They do want to know when the settings don’t cut through all the way. )

OK, so the sheet it happened to is a bust, and just from now on, I should try the settings you suggested above? How do I get to those settings, do I swap from PG to manual, and the manual is already at PG levels? So then I just slow it by 10?

Correct. (It’s an extra step, but it can save you some PG if the maple is part of a batch that is a little thicker.)

This stuff varies just a little bit from batch to batch…I sympathize with the attempt to always hit it 100% with their default settings, but it might not always be feasible. And it’s more of a hassle to try to replace it than it’s worth to me. If i screw up a cut and it doesn’t make it all the way through, I mark that sheet with an X near the tag, then I know to use the slower speed when I cut the rest of it. And generally all of a batch tends to be the same.

Anyway, I hope it gets sorted out.

Yeah, maybe when I make a large number of small things, I will have to test one before I do the whole sheet, but I have noticed that it isnt the entire sheet that is the problem, just parts (for instance in the pictures I posted above, the small circles worked fine, and the outsides of the chess pieces were not often the problem, but the inner cuts failed on almost every one. So I dont know that it was the whole sheet, but I cannot think what would be different between inner and outer cuts that would cause it to fail almost every inner, and almost none of the outer.

Following this. I had a sheet of PG maple plywood that did the same thing. Sent it in to support, haven’t heard back. For me it is just that one sheet, no matter what geometry I put on it or where on the sheet. Not warped. Measured thickness, same as other sheets.
Every other PG sheet else works perfectly.

Yep! I find I have to slow it down for small, tight, curving lines. If the interiors don’t cut, but the larger outer outlines do, definitely try slowing it down a little. And cutting one first is an excellent idea.

(That same thing happens when you’re using a digital cutter, so i know to adjust for it. It happens more often with those on tight angled cuts as well, because the knife hangs up.)

They might wind up tweaking the settings on the defaults as a result of the problems that people are running in to down the road.

I’m sorry your print didn’t turn out beautifully, @tesla14alex! When a Glowforge unit doesn’t cut through Proofgrade material using default settings, the solution is usually one of the following: Your materials might not be lying flat, your unit might need repair or cleaning, or your design or settings might need attention. Unfortunately, I don’t know which one is right for you.

I suggest the following steps to start:

If the Crumb tray is mispositioned or holding bits of material from packaging or printing, it could keep your material from lying flat. Even a millimeter difference in height could affect your laser’s ability to cut.

Even when the Crumb Tray is clean and flat the material may not be lying flat on the surface. Proofgrade™ material can develop a curve (called ‘warp’), and warped material may not cut as expected, especially if your print or the warp are large. If you lay the piece of hardwood that you used for the print on top of your Glowforge, does it lie flat?

If the laser isn’t able to travel freely, your materials won’t cut through. It’s possible that your unit’s lens or windows are damaged or dirty. Please follow the cleaning instructions for things that need wiping, and also check carefully for scratches or damage on the lens and windows on each step.

After inspecting and cleaning, would you please print the Founder’s Ruler again on a flat piece of Maple Plywood, and let me know how it goes?