Has anyone ever used this two-toned acrylic from Houston Acrylics? I thought it was a great idea, but it is most definitely NOT cast acrylic! It really stinks up the house and smells a lot like PVC. 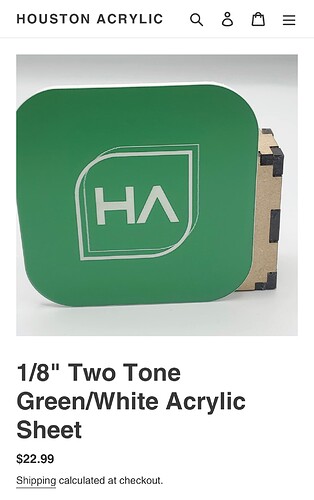 There are lots of sources for two tone acrylic that is cast acrylic. Have a look at Inventables and Johnson Plastics Plus. I have engraved two (also three color) materials from both of these sources.

I saw that as well. That’s why I bought it. However, it is definitely different than any cast acrylic I’ve used before. It is even quite soft and almost sticky after cutting, even after it sits for a while. And the smell it produces is very different than other cast acrylic I’ve used. It smells exactly the same as pvc pipe when I cut it with a power saw. So, I was just wondering if anyone noticed this as well. I’ll take a look at the other sources mentioned. Is there a way to tell of the acrylic is cast as opposed to extruded?

The merchant will definitely state whether the acrylic is cast or extruded, just as Houston Acrylic did.

These little suppliers that added multi-color and “pattern” acrylic over the past year are generally buying UV printers and printing on top of cast acrylic sheets (the same ones they’d been previously selling). I would expect that’s just UV printed green on white cast acrylic. Actual multi-layer acrylic (2/3-tone) from the major sheet plastic manufacturers is typically co-extruded. So if you’re trying to avoid extruded acrylic, the product you bought is your best bet.

If you want to make the same product with none of the smell, perhaps consider printing instead of engraving. A sublimation printer can be as cheap as a few hundred bucks. A heat transfer printer a few thousand. Or you can lease a UV printer. All of which would be able to put green, or any other color, on a sheet of white cast acrylic in your own home.

Interesting. I never thought about that. I was considering spray painting some white cast acrylic and then, after it dries for several days, do the same thing. But, the sublimation way might be better.

I don’t mind the smell as long as it’s safe. I can try venting better. I just want it to be safe for myself and the Glowforge.

Sublimation on acrylic looks awesome, but I don’t think you’d get the same results in terms of a strong opaque color. And UV printers are not cheap.