Unable to Use Passthrough or Calibrate Camera

This is a twofold problem.

I am attempting to use my passthrough. Before I make the first cut, I am getting the error below. I tested the design on a smaller scale without the passthrough, and everything was fine.

I thought it could be an issue with the camera, so I tried to calibrate. This has never been successful for me – every time I do this, it gets to measuring material and then tells me that it’s lost internet connection. It’s pretty close to my router, and no other devices have lost access, nor has my glowforge ever lost access during any other cuts so I don’t think that’s the issues – especially after reading several others having these issues. 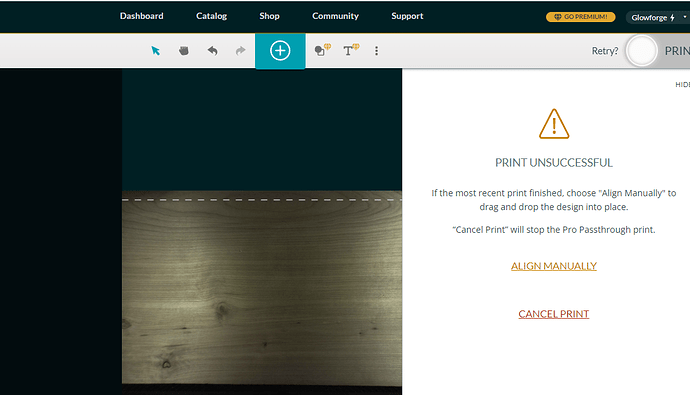 Regardless how close the machine is to your router, it could be interference on the channel - possibly from a neighbor, some kind of device they added. 2.4GHz band is robust but that means it travels a long distance so is subject to interference.

See if your router has the ability to scan for a clean channel and switch to that.

Unless it can travel several miles, a neighbor isn’t interfering with my signal.

But, I will look into trying to find a different channel. I’ve found multiple people with that same issues(saying WIFI when it wasn’t truly), so I wasn’t as concerned with that.

The only time I had issues with my wifi was running the calibration process. I had to set up another router just to get it to complete. Since then - two years ago now I think - I’ve been back on my regular wifi.

(never an issue with passthru, however)…

The GF can be finicky.

i am getting this same type of error when i try to use the passthrough feature. when i rescale my image to standard size, without passthrough option, it works fine. i am eager to see how to resolve this issue.

I ended up having to get a new print head. Nothing else made any difference.

did you have any problems with passthrough cuts with the new printhead?

Nope…a few alignments have been slightly off(I can workaround that), but honestly that’s been an ongoing issue. Also, the new print head has solved several other issues I was having.