Unwanted lines above and/or below text

I’m running into an issue that is new to me, and I’m hoping someone else might have run into this and figured it out. I’m trying to put some text on coasters, and for some reason, I usually (but not always) get lines above and/or below one of the lines of text. 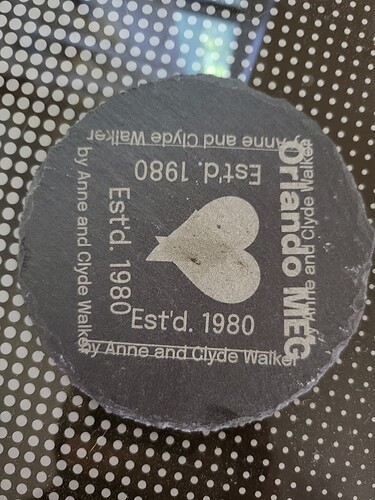 I also had to type the b separate in the line from the rest of the text, because it would fill the inside of the circle of the b (that would show up on the screen too). I’ve tried re-typing it, restarting everything, resizing it, re-everything, but I can’t seem to figure out the issue. Has anyone else run into this before? Thanks for the help,

Here is an example of the b issue as well. You can see it on the slate in the 1st image, and here on the computer. The 1st b is separate text, and the 2nd b is together with the rest of the line. Hopefully that makes sense. 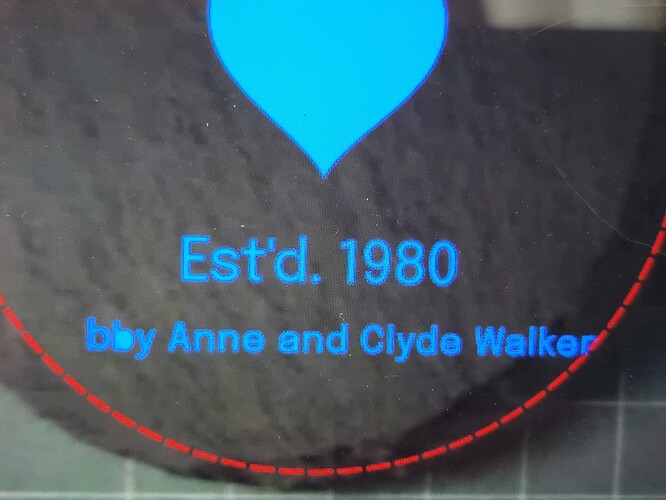 I have not had this issue. If you could share the file, someone can see if they see anything unusual. Also, random lines is an indication of an open node that some users have had to deal with. Sometimes rasterizing the file in your graphics program fixes that.

The fastest solution, however, is to share the file.

What program are you using to create the text?

That is something different. As @ekla says, what program do you use to create the text?

The 1st b is separate text, and the 2nd b is together with the rest of the line.

Looking carefully there is a filled circle over the second “b” which suggests that if that the filled circle was removed both "b"s would be the same.

I usually (but not always) get lines above and/or below one of the lines of text.

Looking carefully there, those lines are in the text and not above or below. If you look carefully at where the lines start and stop you will likely find two nodes on top of each other not connected. By making the two nodes one node that should fix the issue.

Thanks for all the replies. This was done directly in Glowforge, just adding a text box. It seems to only happen when using a certain font (Epilogue) and I found an almost identical font that it does not happen with (Farro). I’m still curious as to why it happens, but there is less urgency to it now.

Sorry, meant to say at the top and bottom of the text, not above and below.

The filled circle is being added through Glowforge and can’t be removed. That had been part of the frustration. I found a font that is similar and this does not happen with, so now it’s more just about curiosity and finding a solution for the next person that runs into this issue. Thanks for the reply.

Just Glowforge. Not importing anything.

It seems to only happen when using a certain font (Epilogue) and I found an almost identical font that it does not happen with (Farro). I’m still curious as to why it happens, but there is less urgency to it now.

That is the answer then. Not all the Noun images or the text fonts are actually appropriate for the laser. If downloaded and studied I think those issues would be found and fixable likely as I pointed out, but they would still be a part of the font the next time.

I would drop a note to Support with photos and explain about the Epilogue font but at best I think they will just remove it.

The heart shape in the middle also looks a little odd. It kind of looks like it has a triangle overlaid on it creating an extra tip. The large name is also overlapping some text.

Good answer, thanks! I’ll mention it to support. At least theybwould know and can handle it as needed. Thanks!

The heart was uneffected, i just kept using the same coaster to try again instead of wasting a new coaster for each print. So it was printed 4x, once from each angle. Thanks for the reply though.