I have an svg file from inkscape with some cut out circles, a black only drawing and a text string added in inkscape and converted to a path. The drawing and text are recognized by the upload software as engraving type s. However, only the text in engraved. The head is scanned over where the image should be, but no engraving is performed. The circles were cut.
No errors were emitted by the software.
How should the graphic be added so that it will engrave? 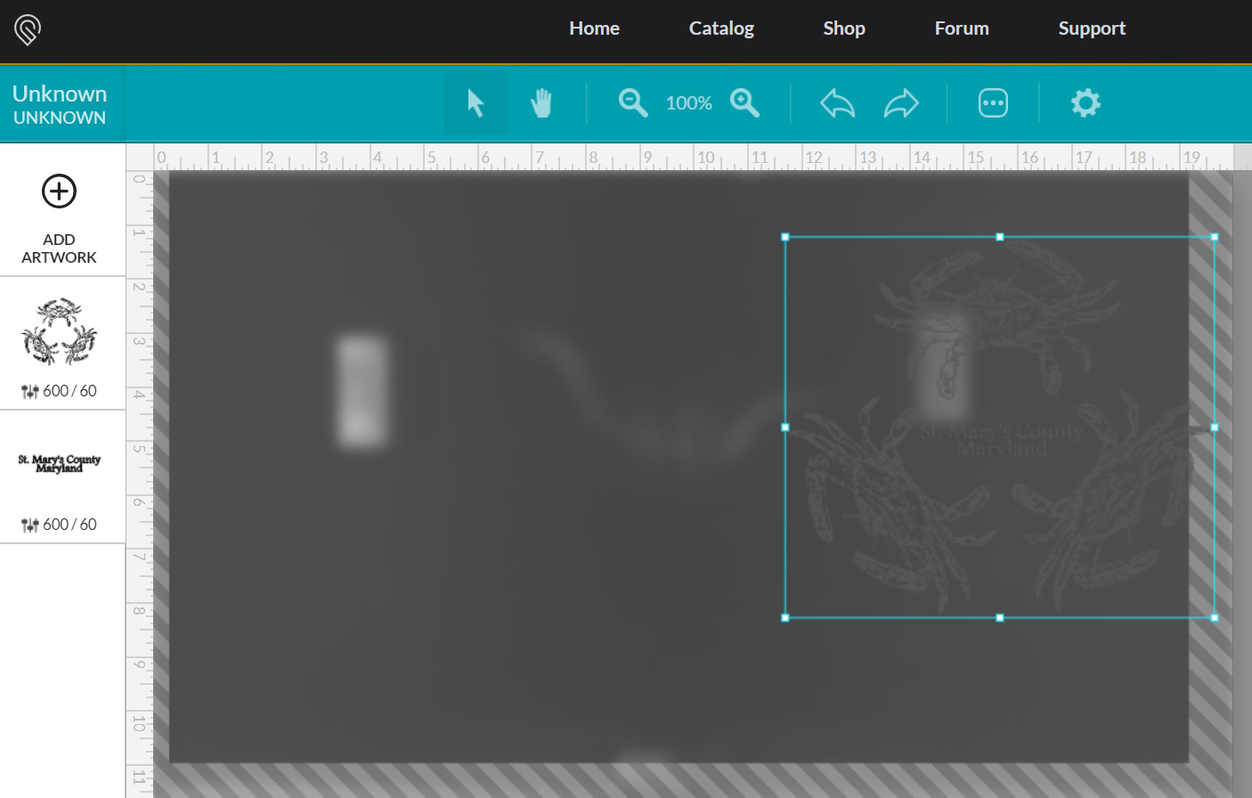 It’s also useful to note that sometimes part of an image or object might be WAY outside of the limits and never be seen on the bed. You can do a Ctrl-A to select everything. Might show you if there are stray objects.

The head is scanned over where the image should be, but no engraving is performed. The circles were cut.

That it scanned over the area where it should have been engraved suggests that it did, indeed, know it was there and was within the bounds.

What were your settings for that engrave step? What material were you using?

Can you take a screen shot with the material on the bed, and showing the settings for that engrave operation?

I was using the proof grade acrylic and the default settings. I did tell it to ignore one of the circles. The bounding box was entirely on the material as shown by the camera.
I reimported the drawing into inkscape and now there text is not being engraved either.

You might want to check the actual settings that got loaded for that engrave, by clicking on Manual after selecting your Proofgrade default engrave choice.

If you are printing on an Unknown Material, you will see a setting of 1% power as a default. If you got a piece of material with a bad sticker it might have loaded a default setting that was so light it wouldn’t have even marked the paper on top of the proofgrade.

But it would have run through the motions looking like it was engraving. Just no results. (I did that once.)

Just something to check.

Alternatively, you can upload your file and let someone take a look at it. Just zip it and drag and drop it into a post.

Thanks for tips. I will have to revisit the acrylic engraving later.
I did get it to print on wood. However, when I replicated it to print multiple copies, the identical images were recognized as separate entities to engrave and I could find no way to scroll down the list of images on the left to set all of the engraving and cutting parameters. I am using non-proofgrade Baltic birch plywood so I had to set all of parameters. I ended up engraving only three at a time since that is all I could access. Does anyone know of a way to scroll the control panel on the left? The image bounding box also showed in the GF GUI as a part to engrave, but it thankfully did not engrave. Does Glowforge have a formal bug report mechanism?

Does anyone know of a way to scroll the control panel on the left?

Hover the mouse over the thumbnail column and use the center wheel to scroll up and down.

The image bounding box also showed in the GF GUI as a part to engrave, but it thankfully did not engrave.

That is how clip paths are treated. The GFUI doesn’t process them, it gives you the option to process them or ignore them. Be careful when you leave them in your design.

Does Glowforge have a formal bug report mechanism?

Does Glowforge have a formal bug report mechanism?

Reporting them here in Problems and Support, or sending an email to support@glowforge.com. (One or the other, not both.)

Ah, I see. The side of the touch pad lets me scroll up and down.
I had receive error messages about clip paths on other designs,
but none for this one. I imported a gif that I made the background
transparent, but inkscape re-applied the white background.
Thanks, I am still a novice with inkscape…
I was thinking more along the lines of bugzilla, so people could see what
has been reported and not duplicate reports. While the software is not open source,
it is getting a great deal of vetting in the field.

Well in a lot of cases they want individual reports on things that people see, so for now they’ve asked us to post one issue per thread here. (So they can open a ticket on it.)

a setting of 1% power

This exact same thing has happened to me…I didn’t notice the 1% setting, so of course, it engraved at that setting which wasn’t even visible. Now, I double check every time.

I’m sorry your print didn’t turn out beautifully, @jgf. Thanks to all for the help! If you’re still running into this issue, could you please send us the file you’re having trouble with? I’ll be happy to take a look.