When I upload a plain svg file made in Inkscape to the GlowForge , I get an anomalous gray background the size of the page as a separate layer in the GF GUI that wants to engrave it.

When I upload the same file in PDF format, I get only the vectors I desire, in this case the border of Montana.

I have the background in Inkscape set to transparent. Any idea why this is happening? Are others experiencing this?

I just set the “bad” layer to ignore, but it does interfere with being able to see the vectors.

SVG File: Note the two layers in the Art Panel on the left and the gray background that obscures the vector data 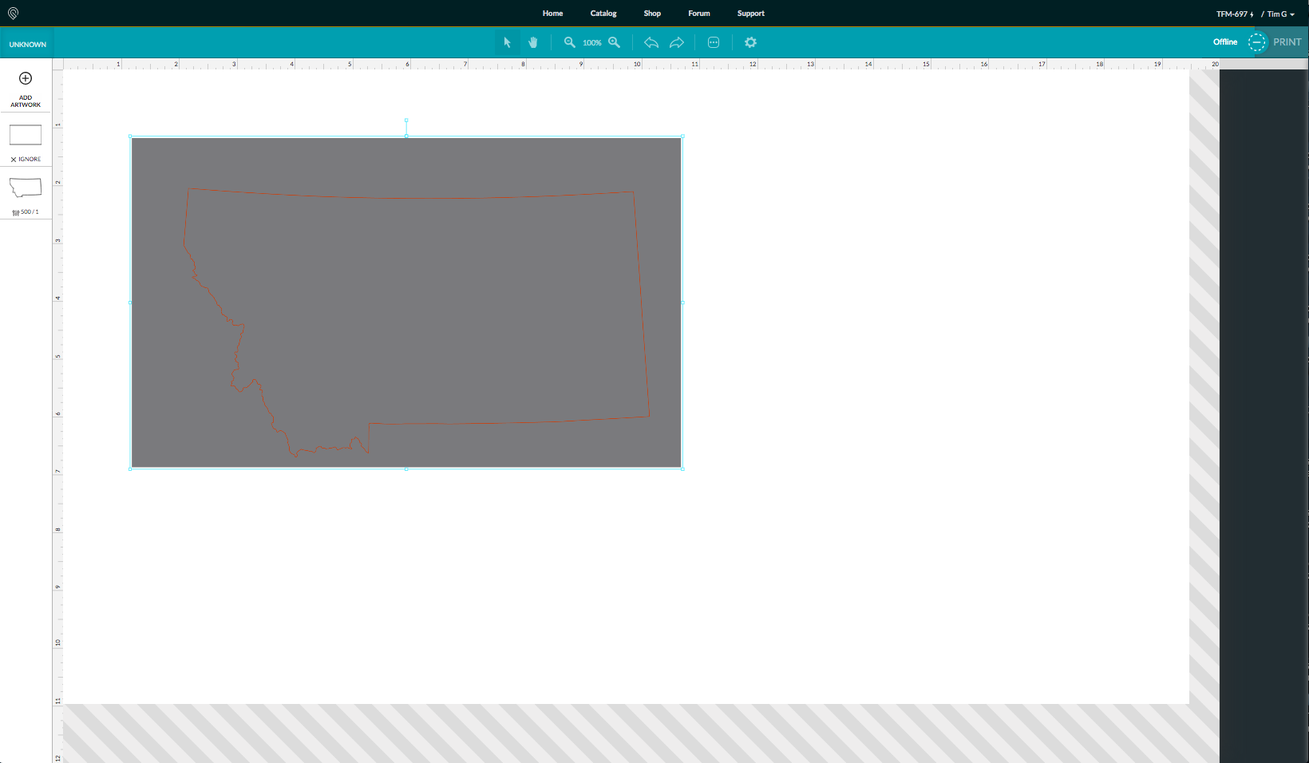 PDF File: Note there is only one layer in the Art Panel, the desired vectors of Montana that are more easily visible. 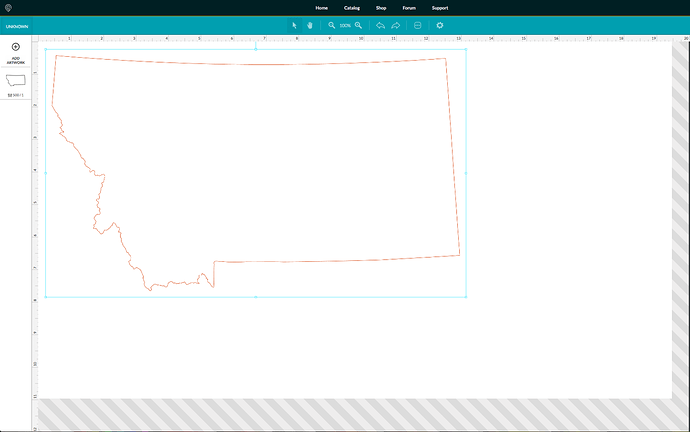 I get this all the time, too. Sometimes there’s a warning saying how the GF can’t process ‘clip paths’, yet…but sometimes there’s no warning, just the ‘dark box’. It used to be that you couldn’t run the print at all when this happened, but now at least, you can do as you said…set the one step to ignore and it will engrave the rest just fine. I use Affinity Designer and it either doesn’t allow removal of those clip paths or I have not yet figured out how to do it. Apparently, people who use Illustrator are able to remove them.

I was about to try Affinity Designer to see if that was a work around. Your response saved me the time of trying this! Thanks! I will stick to using PDF format until this is solved.

I use Affinity Designer and it either doesn’t allow removal of those clip paths or I have not yet figured out how to do it.

SVG files are just text, so you can open an SVG in a text editor and delete the offending clip path (assuming it doesn’t actually serve a purpose). In files exported from Affinity Designer, you’ll often see something like

You can completely delete the initial <clipPath>…</clipPath> definition (and everything in between). Then just delete the <g clip-path=…> line and the </g> lines (but don’t delete the stuff in between). Don’t worry about fixing the indentation.

I have the background in Inkscape set to transparent

I’m very much a newbie with inkscape(version .92 in my case), but why do you have a 'background ’ ?
And why is it set to transparent ?

All documents have a background. Setting it to transparent, in my case, allows me to see the vectors. Many people do design work with Inkscape and related software, so for instance if you were making a big poster of the sky at night, you would want the background to be black so you could see the bright stars you design and place on the background. Or, maybe you want a blue sky on a nice day.

Have fun with Inkscape!!! Its good entertainment!!!

Wow! Really? This is fascinating. No one ever came up with this before…at least to me. There should be a way to do it in AD, though…that’s a PITA to have to do it the long way like that. I will try it out. Thanks!

Hrm… Not sure when I’ll have time to work on this, but it shouldn’t be too hard to write an Automator script for OSX that you could drop an SVG into that would programmatically strip out those tags and save it out.

I’ll be sure to share it here when/if I get it working. I’ll be pretty motivated in March – work isn’t renewing my Adobe CC subscription, so I’ll be dependent on AD and [shudder] Inkscape.

There should be a way to do it in AD, though…that’s a PITA to have to do it the long way like that.

When my Glowforge first arrived (August 2017), I had to do this pretty regularly, but I honestly can’t remember the last time I needed to. Something must have changed in my AD workflow, but I’m not sure what it is.

There should be a way to do it in AD, though

In experimenting with this I ran across a few bugs in AD where sometimes it doesn’t import clipping paths correctly from SVG files, even SVG files that were created in AD. (It looks like they’re aware of this though, so hopefully they fix it soon.)

I’m not sure what it is.

Perhaps it will come back to you and you can share it! I know I’m not the only one using AD that would like to know this. I also got my machine in Aug.'17. I had a PRU before that. I do know one thing for certain, it used to be that anytime a ‘clipping path’ error would show up in the UI, you couldn’t proceed any further. At least now, you can just ignore it and move forward.

Oh yeah! That would be deluxe…and you would be my knight in shining, lasered armor!

I even searched the Affinity website and used the *ahem…help feature in app. and there were no results at all for clip path or clipping path…like it didn’t even recognize the term.

Hi Tim,
it took me a few minutes to wake up enough to realise why I found your description of your workspace so different to mine.
I think it comes down to how we approach our work.
Having got the laser before I started to use inkscape, I tend to think only in cutting lines, because I haven’t yet thought about what I might do with engraves.
My prime need is to concentrate on controlling the shape of the components of my fans, both sticks and inlays.
When I’ve got that under control, I can start thinking about surface decoration !
Consequently, I haven’t yet started using layers/gradients/filters etc so I’m still very much a flatlander.
John

OK, I have been reading in the forums for the last month, and I have no idea what the software requirements are for using my Glowforge, when it comes. (Later this month? I just got my proofgrade shipment.) Can someone point me to the place where software is discussed for the new user? Or is there a wonderful manual that comes with the printer that makes everything clear?!

Suggested order of study is outlined below

First thing to do is run through the starter prints here: First Three Prints Then if you want to get started doing your own stuff quickly, the Matrix has a lot of tutorials and video links showing the best of the tips and tricks: For using the Glowforge: For Using Photoshop, GIMP and Paintshop: For using Illustrator, Inkscape, CorelDRAW and Affinity Designer: For using Fusion 360, OnShape, Openscad, Rhino, etc. Have fun!

At the top of the forum page, under All Categories, you’ll find Glowforge Tips and Tricks.

Regarding what software, basically you’ll need a photoediting program to convert pictures into something the GF can accept, as engraves, and a drawing program (think lines not pictures) that it will accept as cuts.

The links in that writeup take you directly to it. Basically it’s a series of spreadsheets that list links to all the tutorials, by category.

I have a question about the ornament project you demonstrated in the “How to get Perfect Alignment” tutorial:

The raster graphic you used appears to have a white fill background, and in other places people talk about fills causing engraving. If the entire graphic is a rectangle, is white being identified as “ignored” before creation? Otherwise the entire rectangle shape would be engraved?

Am I misunderstanding something about how raster graphics file get handled, or is the topic of “fills” limited to vector SVGs and PDFs?

Raster graphics can contain a huge number of colors, caused by blending from one color to another. Do bitmap (raster) files uploaded to the GF app need to be a certain color depth (shallowness?) in order to select colors for sequencing by the Glowforge? Otherwise there can be an awful lot of “green” colors or “red” colors, et cetera…

Thanks for all your work,

I hope I can contribute meaningfully once I get started, too.

(Eyeing that UI webdesign job for the interface on the GF website, from afar)