My son is a letter carrier and is also Type 1 diabetic. The amount of walking he does requires him to keep some emergency snacks on hand to manage low blood sugars. Problem is, it’s a pretty physical job and he goes through more snacks by crushing them than by eating them. So I made him a friction-fit slip-case large enough for two Lance cracker packs. Here it is opened and loaded. 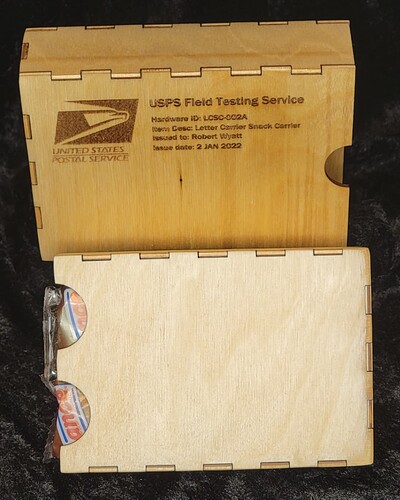 Just for fun I made up the fictional USPS Field Testing Service and enrolled him as a field tech who tests candidate items. The plan is to show it off to his colleagues and see how many of them want to become field testing techs and get cool free stuff too. We figure if some of them take it badly when he reveals the joke I might have to whip up several more but that’s OK.

And here it is fully closed. I added field testing instructions on the back to help sell the con. 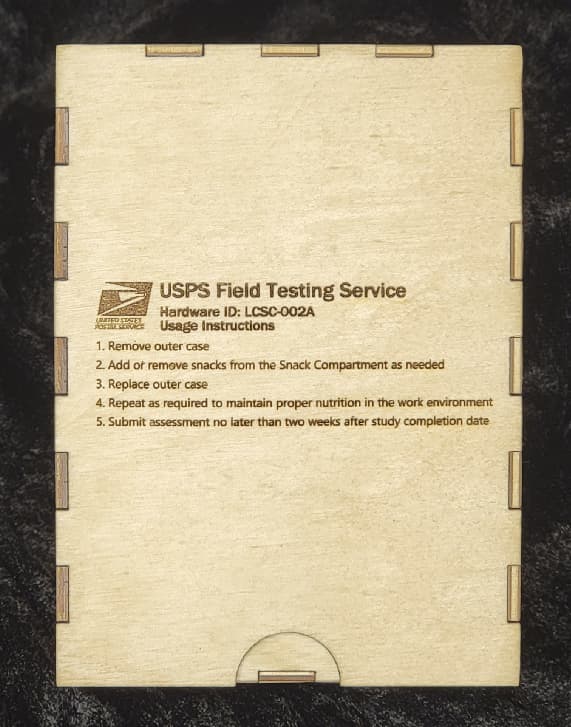 Case is made with 1/8 birch ply and finished with tung oil, then waxed. I intentionally made the two pieces with zero clearance then sanded the inner box down to a solid but usable friction fit. The ply was slightly bowed so I assembled the inner box with the bow facing out and the outer box with the bow facing in. This helps ensure that the friction fit works even as the wood grows and shrinks with the weather.

My son loves it. We’ll find out tomorrow whether his colleagues fall for it.

This is great and thanks for sharing your insights on getting a good friction fit!

I can almost hear the chuckling from you and your son! Hope you’re stocked on materials!

Wonderful job on that!

I like your sense of humor (I once wrote an SOP on how to use a ballpoint pen). I checked out your blog and your most recent post had tears running down my face.

That’s so cool! I’m sure his coworkers will agree!

What a fantastic “con”. I love the extra steps you took to make it seem like a legitimate piece of USPS equipment

That looks well made. Does it fit in the pocket easily?

thanks for sharing your insights on getting a good friction fit!

This is the first time I’ve made a slip-case using friction fit. My last box was shoe-box shaped so there was plenty of leverage to grab onto the lid and box. For this one it had to work using only the finger-holes at the edge. Since this is plywood I do not expect much seasonal expansion or shrinkage so I had to count on the natural spring action of the large panels.

To anyone wondering whether I may be MASSIVELY over-engineering this, remember this is basically a medical device at this point. Last thing I want is to get a call saying “we found your son seizing on the ground next to two packs of crackers in an un-openable box.” He’s a postal carrier so the call we are expecting is more like “your son limped into the Emergency Room with a pit bull attached to his shin.”

(I once wrote an SOP on how to use a ballpoint pen). I checked out your blog and your most recent post had tears running down my face.

Now that I’ve been making pens on the lathe, I discovered there are several varieties (click, rollerball, twist, fountain), with many ways of opening them to access the refill or ink cartridge. While I’m confident your document was humorous, there’s a case to be made that a serious version might actually be required.

Glad you liked the blog post. It turns out the PAPR respirator also comes in handy when I forget to attach the Glowforge exhaust hose to the window and set off all the smoke detectors in the house. Not onl;y does it let you safely enter the room where the printer resides, it scares the cats out of one or two of their nine lives! I should probably write that up as its own post.

I’m sure his coworkers will agree!

We’ll get a report tonight. Things have settled down so he should be home before 10pm tonight for a change. I’m halfway expecting to get a visit from the Postal Inspector telling me I misused their logo and that this carries a fine and prison time. D’oh!

That looks well made. Does it fit in the pocket easily?

Thanks! It is a snug fit so there’s no chance it will come undone. My main concern is it would swell up and get stuck but it is raining here today so we’ll find out pretty quick. There is more than enough room to sand down if that happens though so it’s mostly a matter of adjustment rather than re-making it.

For the curious, I used the generator at MakerCase and specified the interior dimensions of the inner box. This is true 1/8 ply so I then added .25 inches to obtain the interior dimensions of the outer box. This resulted in zero clearance and almost impossible to open or close the box by hand. The clearance needed was then obtained by easing the corners until most of the laser burn marks were removed. I also did a slight sanding on the panels to remove glue and smooth it up.

As the photos show, at no point did the sanding go below the outer layer of veneer in the plywood so that was more cosmetic than for adjusting the fit. If the sanding required had gone through the veneer I would have re-made it with an extra 1/64 or 1/32 tolerance.

Thanks for all the feedback, everyone! I don’t know how 2022 will turn out but it’s been nice to start it with something fun.

Despite my negativity in the other thread, I really like seeing this and wish we had carriers that actually cared here, because I would love to show my appreciation.

Edited to add - I put a white ribbon on my mailbox last year, and shared the design here. Just a simple thing to show appreciation for those that kept going thru the difficult times.

I also cut and donated about $200 of “ear savers” to the retail outlets I frequent most.

I’m halfway expecting to get a visit from the Postal Inspector telling me I misused their logo and that this carries a fine and prison time.

Or get it confiscated for misusing Postoffice equipment

We still have several PO carry boxes sitting out from when the postman was dropping them by when the box was overfull. It would appear that the plastic they use is very sensitive to UV light as one has almost turned to tiny bits.

Following up, the snack box was a big hit at my son’s post office and the postmaster hasn’t (yet) taken me into custody. The existence of a USPS Field Testing Service turned out to be a harder sell than I expected since we have no new applicants. (Although we did get a few requests for more boxes.)

That is so clever