I needed a trivet, and I wanted to make a first stab at marquetry using a set of veneers I ordered. So I made this: 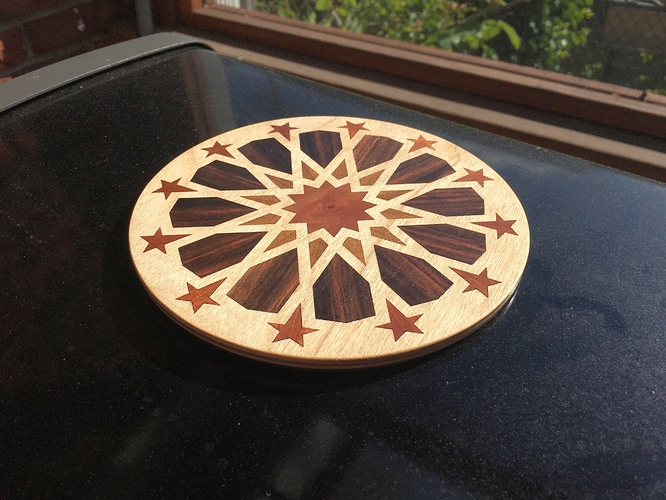 It is of 1/4" Baltic birch plywood with inlays of various veneers; there is a thin cork backing on the bottom. It came out pretty well, though the varnish was old and dried so quickly that it left visible brushstrokes. That’s OK, since I don’t expect the piece to hold up to the heat from items placed on it! Mostly an experiment and practice run in working with veneers. It was fun! 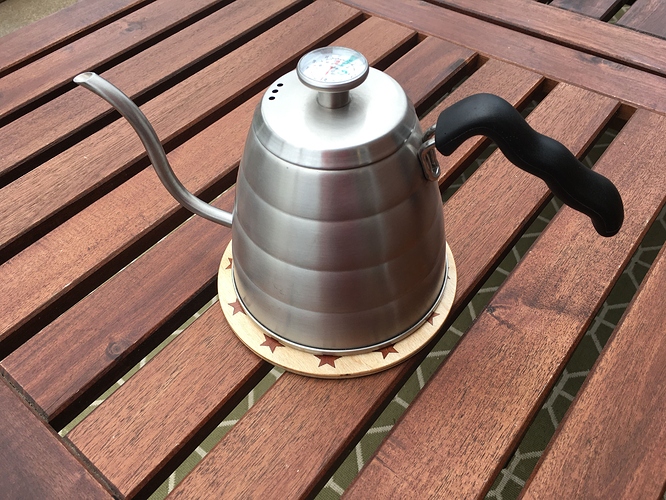 Thanks for the heads-up! Fixed–I hope!

Did you kerf correct the pieces? If so, by how much?

I didn’t find that I needed to kerf-correct. The excavations in the base material are engraved rather than cut, so only the veneer pieces were affected by beam width. Due to the fact that they are so thin, the material lost from each cut seemed to range from 0.03 to 0.08 mm depending on material. The fit was pretty tight. The edge issues I see are mostly due to stepping from the relatively low resolution I used on the engrave (90 lines per cm). I’d probably move to higher resolution in the future to avoid that effect.

Aha it’s a pocket inlay. I thought maybe you cut the surround.

Thanks! The pattern is Islamic.

The pattern is Islamic.

I recognize the Islamic pattern as I have used similar myself. 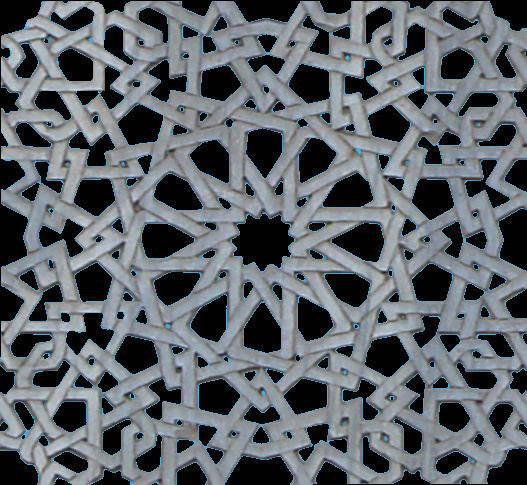 I would toss on more coats to protect as well as possible, and not use it with things hot enough to leave a mark. It is nice enough to preserve!

Yes, thin veneer inlaid into excavations. I’ve done the other style too, but I chose a very hairy first attempt! Definitely had to adjust not just for kerf but for trapezoidal profile in that case.

but for trapezoidal profile in that case.

Generally you do what I call “flipmating”, where you flip the inset pieces to match the cut profile of the receiving piece. You get really good results that way. So really it’s just mirror the pieces and then do one kerf adjust and your’e good to go.

The benefit here would be that your job would probably be significantly faster; engraving is very slow.

The edge issues I see are mostly due to stepping from the relatively low resolution I used on the engrave (90 lines per cm). I’d probably move to higher resolution in the future to avoid that effect.

Do you think running a score line around the edge of your engrave would be enough to clean the edges to avoid the stepping?

It’s gorgeous! I like that you have a wide strip of the Baltic birch between the pieces. Makes it more of a show.

Yes, flip-mating (good term) was the solution I came to for the labyrinth. What made it hairy was fitting two tight, thin spirals together—in the end, there were difficulties in fitting due to the differences in “springiness” of the wood, and it was very hard not to break a piece at least once each build. Next time, I’d probably make a number of smaller pieces…

It is definitely slower to engrave, but cutting full voids in 6mm plywood for 0.5 mm figured veneers isn’t very practical (though of course you could laminate the veneers on top of a plywood insert in each void). Probably what I’ll do with future work with thin natural veneers is do a tight veneer-only composition and then insert the whole thing into the base material.

Thanks! I actually spent a good bit of time deciding how thick the borders should be. Part of me wanted really thin borders to highlight the different figures of the veneer, but I’m glad that I went with what I did. The Baltic is quite pretty itself.

There needs to be some research on it but I suspect that the kerf issues in cuts are at least different when engraving or cutting, and even a score not going as deep as a full cut would have a smaller kerf.