Here’s a map of Vermont showing rivers and major lakes. Made with @timtsuga’s files. This time I trimmed some of the rivers where they pass through lakes. 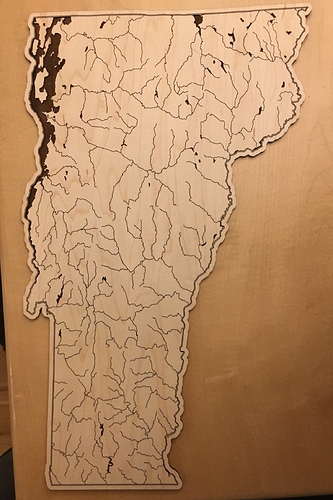 Disappointed at the visual alignment in the Glowforge bed. Was off at least 1/4” in Y and similar in X. Meant that the bottom of my project was cut off (seen on the west side of the state), as I was trying to make it as big as possible on a sheet of proofgrade maple plywood.

Also finding that the recent batch of proofgrade that I received won’t lay flat. It curls up about one board thickness at the edge of the map, but this was not due to the cut- was like that out of the box. 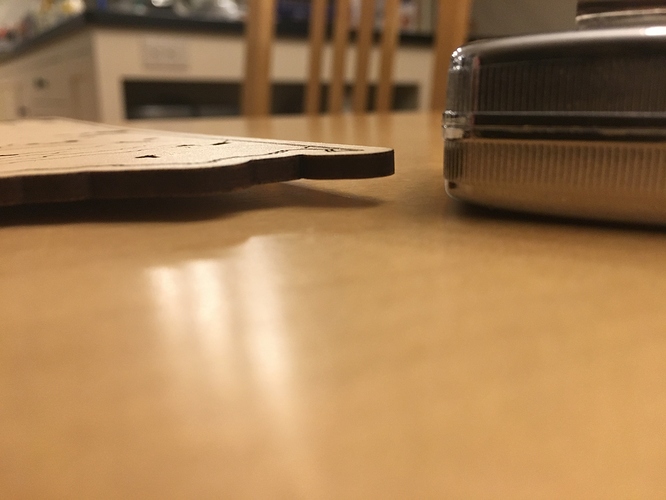 Your buffer around the state is a nice touch!!!

Here is the post-cut view with the deck camera showing the cutout and the artwork misaligned. Isn’t this supposed to be resolved by now?

They’re still quoting 1/4" unless you use snapmarks (if you have them). Otherwise, jig.

(And the proofgrade wood, well, it’s wood. It will be flat in the environment it came from, alas. Otherwise you need magnets or pins.)

The steps below will work with unfinished wood.
With proofgrade, it may require some sanding to get past the finish and expose the wood. Never had Proofgrade bow that badly, so …

Goofgrade Fix
Mist the back with some alcohol spray.
Put it face down on a flat surface.
Cover with a paper towel and set a weight on it. (I use a 10 lb weight but any weight will do).
Examine tomorrow. Repeat if necessary.

I thought the MDF core of the proofgrade plywood was supposed to prevent such problems?

Excep mdf absorbs water and swells like the dickens. Especially in winter weather if it is stored cold and then brought into a warm house?

Thin mdf core plywood is notorious for this, at least wherever I’ve lived. This is why flooring and cabinetry has to sit in the home for a little while to acclimate.

I live in Hawaii and all of my boards are susceptible to warping if they aren’t laying flat, this I assume is due to the humidity softening the wood. Typically happens if I remove a piece from my bed and lay it against the table the Glowforge rests on for more than a day. I understand yours came warped, which is definitely strange, was it a full box of proofgrade? I’m wondering if maybe there was room for the boards to move and warp from the packaging. Of course, I’ve had proofgrade arrive with damaged corners, so it could be a number of things that caused it.

As for the alignment, it’s the furthest edges that will be off, due to the roundness of the fisheye lense being used. What some people, including myself, do is setup their artboard in the designing software to match the current engraveable area of the bed. For me, I do an artboard at 19x11 just to really be sure I’m within the limits; then I center everything to that. If what the UI is showing you is off more than 1/4 in the center of the bed, then you definitely have a problem that the team will have to look into.

Keep in mind… No matter how great

is, it’s still just wood and it will do all of the things that woods choose to do. I’ve had a couple pieces warp. So of which took some coaxing as @brokendrum suggested. However I did have a piece unwarp itself after about 1 day of just sitting there on a flat surface.