So around came Halloween. Normally our house is “that house’ that people come from far and wide for the animatronics, lights, fog machine, etc and our annual adult Halloween party (not that kind of Adult! It’s PG). Anyway no party this year obviously, and I had fully expected the town to cancel trick or treating, like other towns in MA did (and sadly we are the only green town for miles on the state covid map). But apparently giving kids candy is too important to worry about a deadly virus, so we had to figure that out… to add to the 2020ness of the holiday, we got a heavy snowstorm (originally “it will just sleet a little…” yeah, we got 6” and all the leaves are still on the trees. The last time it snowed the day before Halloween (2011) a large tree came down on our telephone pole snapping it and dropping the transformer Into our driveway where it exploded, just missing a friend’s brand new infinity SUV). When it exploded it spewed toxic transformer oil onto our yard, which required the hazmat team to come vacuum up our property (didn’t have to either clear the snow or leaves as they were all contaminated). Our power was out for over 3 days, and we had trick or treating with tiki-torches (back when those were just oil lamps in your bushes) and our Halloween party ], we cooked the food at my parents and kept it hot on sterno. 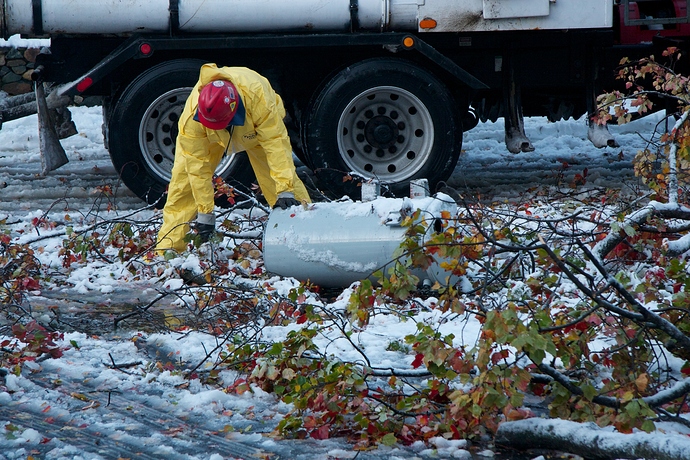 Now we have a generator and power stayed on. And of course we couldn’t have our fog machine running since it was below the freezing point of the fog juice, plus the lanolin would have recondensed on every surface.

So of course I couldn’t set up the day before since those that did had their displays destroyed by the snow and falling branches. So after a massive snow blowing effort (I do my neighbors as well since one has a shattered ankle and the other is a widow with 3 disabled sons). So with an aching back I set up a socially distant Halloween display, which required the ability to dispense candy without anyone getting near us (I can’t imagine any parent letting their kids eat the candy from another household).

Our originally idea was a 2” PVC (OMG he used the V word in a laser forum) pipe from inside to outside (just cheap schedule 40 stuff)and in the beginning that was all, but then my wife had the idea that if we put our horse skeleton climbing the front steps and run the pipe inside the rib cage we could have the horse “poop the candy out”. So we built that and all of a sudden I realized the flaw in my plan which was how would we know if the kids were there since we wanted then not near our door. So I had to make a temporary doorbell. I ran over to our local old-school electronics store and got a big button (in theory a lit button but that part didn’t work) a buzzer for inside (which sounded painfully like a smoke alarm). And lasered out a doorbell plaque (

maple as well (mostly because that was on top and it was 30 minutes before kids started arriving). I had a scrap 1x1 left over from a steel rod order which I had forgotten to throw away which I sharpened with a hatchet, and screwed the sign in and pounded the stake into our front bushes at put a lamp on it. Then on the horse’s butt I put a sign in glow-in-the-dark 2 layer acrylic from inventables (just used the proofgrade black medium settings).

After all that we got an estimated 45-50 kids, which was more than I expected and way less than normal (we normally give out 3 Costco sized bags of candy). We did discover M&M packets jam in the tube (had to use a wiring snake with a block taped to it to fix the constipation. Regular candy shot out (I had originally designed and 3D printed a surgical tubing slingshot with a little carrier tray that fired the candy down, but turns out we didn’t need it as you will see in the video)

I bet that was a hit with the kids!

They loved it, but normally all the effort is double use since the party has all that and the trick-or-treaters. This was just for them…

Glad you still got a good turnout! (And yeah, pooping horse would be hard for a kid to pass up!)

Quite a metaphor to teach the children.

Sometimes I think you just can’t help yourself! Here you are in pain - getting all that setup anyway because it is fun and it is important! Thank you!! Loved the video.
My hubs did his thing (mostly getting a moving flame bulb and lots of candy), but local authorities scared the handful that we might have another year away, and we’re stuck with 3 big bags of mixed candy.

and we’re stuck with 3 big bags of mixed candy.

Is that a bad thing?

Horse poop should be Babe Ruth. This is absolutely wonderful.

That is just amazing! I wish you had stepped back a bit in the video so we could see the whole display. I’d love to be a kid in your neighborhood.

Well the good news for you is we do this every year (normally a slightly larger scale, so here is last year’s:

They are nicely dense and aerodynamic so really fly down the pipe!

Oh, very cute! Love the fog—really adds to the scene.

Would have been extra fun to pump a little of the fog into the candy tube, along with a blast of air and the plastic noisemaker from a dog toy, to make a gassy smokey farty effect as the candy shoots out the butt!

Maybe that could be an add-on for next year.

pump a little of the fog into the candy tube

The problem was I felt it was below the freezing point of the fog juice, and while we could keep the machine in the house, the risk of setting off the smoke detector is pretty high… It produces a staggering quantity of fog.

I can’t believe I didn’t think of that for my horse skeleton.

The things people just have around the house. Then again you have a tormach in the basement, so…

Double-win, your wife is tall enough to feed the horse.

your wife is tall enough to feed the horse

Hahahahahhahahahaha. My wife barely clears 5’. She can’t even put the blanket over my actual horse. She’s 14” shorter than me. That pipe was right at eye-level for me, so all day while we were setting up, I put a winter glove over it so i wouldn’t injure myself.

I put a winter glove over it so i wouldn’t injure myself.

Since it’s a dead horse I assume he was beating it.

Yesterday three boys came to my door trying to sell off their family’s Halloween candy (made it look like school fundraiser). They wanted me to buy packets of M&Ms for $1. I told them I don’t do business with people who don’t wear masks…

They were quite surprised by my response; they hadn’t planned on that. It made them think, and didn’t cost me any money (“oh, they are so cute! Let me reach into my pocketbook” Um, no).

That is so good; I love the witches! Last year I tried to talk two of my spinner friends to be in a photo with me while I was dyeing wool; we would have (dry) dyed wool from under our hats cascading as colorful hair, dressed in black and each would have a stick for stirring the pot. For some reason, they declined.