What will be engraved

Trying to get an understanding of things before my GF arrives. I have done some little designs. Nothing detailed. Just simple. But I want to make sure I understand how the GF App works before just wasting material. Does anyone have any insight they would like to share please? Based on my image, I am trying to figure out what portion of the image will be engraved (I.e. the white vs. the gray portion). And how to engrave the lettering on the second layer without engraving the entire circle portion. Any help is greatly appreciated. 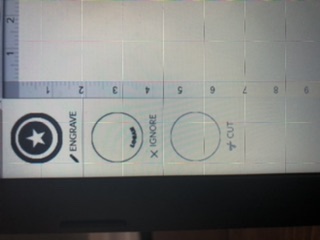 If the image is a vector you can change those engraves to scores, and then you’d get an outline of each of those areas

No. I want the black areas to engrave. I just need to figure out how to have the words engrave without that circle around it

That would be really cool of you. I attached it as a zip file. I use Illustrator and am completely new to it.

If not, here is a picture 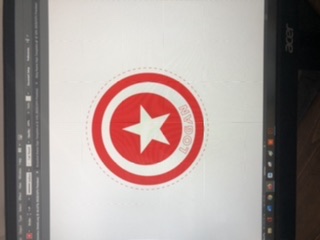 Ok - so you had everything as one colour, so it all merged together the ones you had filled as one step, and the ones you didn’t have filled as a 2nd step. All I did here is change the colour of the individual steps - and you’ll see when you upload they now come up as separate steps so you can set just the center and the circle to engraves, while make Logan either a score or an engrave, and the outer line as a cut.

p.s. It doesn’t understand dashed lines - because as far as the computer is concerned a dash is a solid line - so you can use them, but they won’t cut that way.

That makes so much more sense. Thank you for clarifying this. It was immensely helpful

So to echo @deirdrebeth a bit.

Use colors to separate operations. If everything is engraved make it once color and filled shapes. The app will group them if the same color values and will cut down machine time.

If you want to add a stroke (for doing a score around your engraves) make it a different color.

Your cutting line shouldn’t be dashed. The App will throw an error message (that can be ignored). Just make it a solid line and a different color from strokes. You if you have multiple cuts and want to influence the order make those different colors as well.

One last thing. If you set your artboard to good dimension from the start you’ll know exactly where on the bed things will fall. I use a 1.9.5 x 11 inch artboard which is roughly the usable area of the GF bed. I generally get rid of the extra white space when I upload the image into the app. With the precision placement, unless I’m doing most of a sheet in a design, I just move the stuff where I want inside the app. You’ll see references to 12x20 on the forum just remember to that doesn’t include margins. Your cutting/engraving area will expand and contract based on the operations you’re performing and speeds used.

If there is a feature you don’t want to cut, score, or engrave and it is a separate color from anything else you can just use the ignore feature in the app.

Check out the tutorials in the matrix included in the pinned post under Tips and Tricks.

This video helped me configure AI for the GF when I was starting with AI, it might help you too.

This is great information. I really appreciate that.

now that is an interesting bit of trivia. about the dashed lines. I haven’t drawn any, but I can dang sure keep that in mind.

Oops. Just thinking. You can’t just add a stroke to a filled area to get both engrave and score. You need separate entities for both. Sorry for any confusion.

A “dash” is treated the same as a “stroke width”. They are “styles” applied to a path, and are ignored by the machine, which simply follows paths (for cuts and scores) or uses them to define enclosed object for engraves.

Your cutting line shouldn’t be dashed. The App will throw an error message (that can be ignored).

I think it used to, but now it just loads it as a line - but definitely better to get out of the habit