Is anyone else getting a white residue/film left after cleaning the exhaust fan with the 3m novec degreaser?
We’ve done a pretty thorough cleaning, then used the fan maintenance with the 3m spray, and every time it ends up with this white residue that’s almost worse than the gunk from normal use. 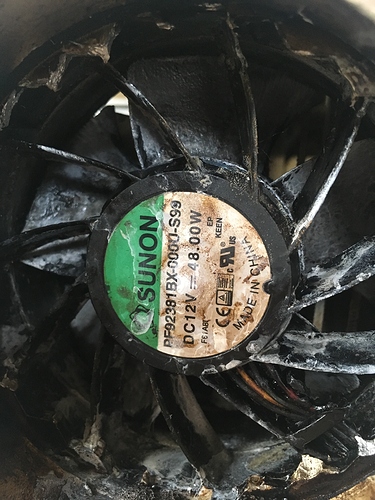 If there is anything left dissolved in the solvent the Novec will evaporate and leave what was dissolved behind. I had a lot of gunk still left behind and got a solid chunk of plastic when it evaporated. You might find that a cotton ball on a stick like for doctors offices or similar soaked in the hand sanitizer should wipe it off and then evaporate.

Thank you! I was wondering if it was something like that. It mostly flakes off, some of it looks kind of fuzzy for lack of a better term.

Thank you for the photo and the details.

Were you spraying the Novec while the fan was running?

Yes, running the fan maintenance and spraying while the fan was running. I can’t seem to get this stuff off of there still.

Can you share what materials you’ve been using for the majority of your prints?

Mostly 1/8” Baltic birch, some proofgrade acrylic.
The fan is still making the growling noise when it first spins up.

It seems like the material you are using is depositing something on the fan blades that can’t be cleaned. Unfortunately, we don’t have any way to support you in using that material. Based on what you’ve reported, continuing to use it could cause your exhaust fan to fail, which would not be covered by the warranty. As it is, though, the noise isn’t a problem for continued safe operation.