Why does increasing engraving speed by 100% not result in 50% reduction in time?

I’m engraving slate coasters on a Pro and happy with the results, but not thrilled that a particular design takes 13 minutes to complete. To decrease engraving time, I increased power from 80 to Full, increased speed from 1200 to 2500, and decreased my lines per inch from 270 to 225. My simple headed logic assumed that increasing speed and decreasing LPI would result in a significant time savings. It didn’t. I’m saving 1:30 and I expected to save at least 6:00. I’m curious why? I’m sure there must be a GF caveat I’m not aware of.

I haven’t test printed using the new settings yet.
Thank you! 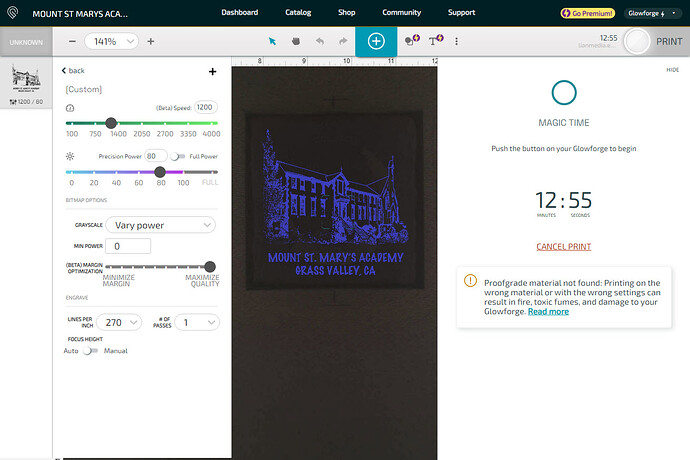 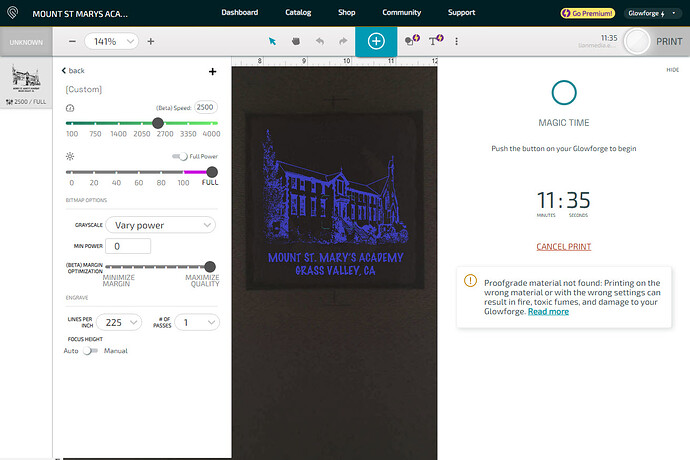 Because neither power or speed are linear.

Just how it is.

Power I can understand and it doesn’t really have anything to do with the equation, but I thought I’d add it in case someone wanted to know. Increasing speed by 100% should decrease time by 50%, unless 1200 and 2500 are just fake GF numbers and don’t correlate to actual speeds.

There is rarely any benefit to going above 1000 speed. Mostly because of how long it takes for the head to slow, stop, and reverse.

Again, just the way it is.

I have dozens of saved settings and none are over 1000 speed (I have a pro).

Thank you for mentioning none of your settings are over 1000.
For fun, I decreased my speed to 1000 to see what would happen and the GF calculated a time of 11:05. It makes complete sense now.

You might have noticed that the available design space left/right shrinks as you increase engrave speed. That’s for the head speeding up and slowing down which eats up those missing speed gains.

When racing in between stop signs, I increase my speed to 60 mph from 30mph. Sadly, the trip takes as long or longer than if I had just stayed at 30mph. By the time I get up to 60, I have to slam on the brakes to stop. Same with the printhead.

This is a great explanation - the speed is the top speed achieved. It’s very useful on large engraves that aren’t close to the edges, but small engraves don’t benefit much, and engraves near the edges don’t have enough room to print at all at the higher speed.

The machine needs to speed up and slow down the gantry as it does its thing. It isn’t lasing while it’s accelerating and decellerating. So a large part of the overall print time is acceleration, not printing. When you increase the print speed, you’re only decreasing the amount of time actually spent printing, but the time spent speeding up and slowing down might actually go up a little because it takes longer to reach a higher speed with a fixed acceleration, or slow down from that higher speed (it depends on how the machine’s motion control is implemented and I don’t know that detail).