Will the wait ever end?

So I have to say that I have had nothing but disappointment from GlowForge and hopefully at some point I will actually get to use the thing. At this point I may use to it make signage for an anti- GlowForge campaign.

So I ordered a pro last may for $6000 and it said there was a 2-3 month wait. I realize that there were people that have waited a lot longer but they also paid a lot less for there purchase. So when my order slipped past the end of the year, I had had it and changed to a basic and found out that would delay another 2-3 months and in utter frustration, I bagged the whole order.

So a couple of weeks ago I went to a wood working show and saw a demo of an Epilog and got renewed interest. So I looked at the web site and it said I could get a pro by the end of the month. Now I realize the price went up but I had impulse fever and pulled the trigger. When I first made the purchase it was on Bob Calgatts recommendation and I forgot to use the referral code. So I emailed last week and still have not gotten a response to that email.

Then I went to owner forum, that I couldn’t see without having an active order. I was more than a little pissed when I saw the $1500 discount on the pro for using the referral code, and the update from Dan saying that they were going to lower the pro price. I had to do deep breathing exercises and if the order hadn’t shipped already, I would have cancelled again. This really borders on deceptive business practices. To say nothing of the $1000 vapor ware filter. They should not be able to bill for something that is no where in site of delivery. I am sure June will turn in the September and March based on past history.

So I ordered some extra materials from the store and anxiously awaited the arrival of the machine, figuring I would sort this stuff out later.

So my fancy pro got delivered on Tuesday but guess what, no accessory kit. So I have an $8000 paper weight. Waiting on an power cord and hose and piece of steel.

You would think that after all the crap that this company has put their customers through, they would actually read a book on customer service or look at companies like amazon and figure out a better way. So I emailed about the missing package and got a response to that one with oops sorry, I will tell someone to send you one.

Not we are sending one 2nd ups so that you will be able to use your machine this weekend.

At this point I am actually tempted to setup a video camera and tell my story on Youtube and finish the video by taking a sledge hammer to it. I fairly certain I could make a fair amount in ad sense revenue.

I would love to be delighted by GlowForge but I have little expectation that is going to happen. If they overnight the accessory kit, and give me the referral discount, I may be able to calm down and have some fun using it. Then the only thing that worries me is the web software. I am fine if Glowforge stays in business but given my experience, I wouldn’t bet a paycheck on it.

GlowForge please prove me wrong and let me use the cool tool you developed. Because right now I have an $8000 paper weight.

Without being sarcastic I suggest taking a few breaths.

When the last parts show you will be happy as can be with this machine.
Just wait it out (even though it is frustrating).

I you go to MyChoice at the UPS web-site you should be able to see where exactly that last 10 lb. package is (IF it had been sent).

You’ve placed so many contingencies upon it, no, you will never be happy with a glowforge.

You have to make yourself happy first, then the glowforge will enhance that.

Just really frustrated. If this were something that were under $1000 I would not be this upset. When I cancelled the order previously I invested in a 4x4 professional CNC that was over double this, the company took the order and delivered in under a month. There email says the shipment contains 2 packages but no where in the ups site does it say there are two including the My Choice thing. I know that everyone that has gotten all theirs likes them. It just seems like a paid a premium to get screwed.

I know that shipping things happen and delays happen but unfortunately for GlowForge there are some companies like amazon, ll bean, fedex, etc. that set the bar pretty high for customer service.

I guess I will have to wait some more.

At this point I am actually tempted to setup a video camera and tell my story on Youtube and finish the video by taking a sledge hammer to it. I fairly certain I could make a fair amount in ad sense revenue.

That will be a sad day for Glowforge’s everywhere 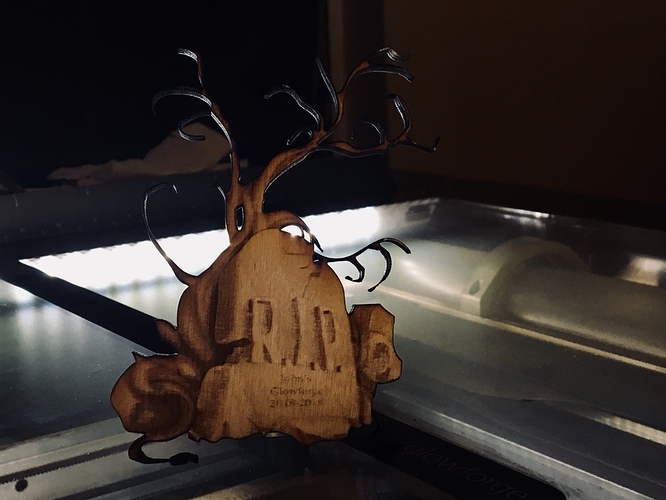 A little off topic, but I always find it really curious when someone’s reaction is to smash something they bought to slight a company or a celebrity or an organization. You already paid them… Youre basically just smashing your own things. Taylor Swift doesnt care if you burn the shirt you paid for. Glowforge is Taylor Swift.

If you’re really angry about the whole thing and want to punish the company, sell it to someone who will pester them with endless questions or something. But don’t punish yourself further. Destroying your own property punishes you, not them.

The shipment goes under one master shipping ID/# in the UPS app. I don’t think I found a way in the UPS app - but on the MyChoice website, there is a “hidden” expandable field, I believe under package information, that shows the tracking info for each box.

I know that everyone that has gotten all theirs likes them

Oh, that might be a bit of an exaggeration. I find it acceptable given the price point of an Epilog. I’m still less than thrilled about a number of things, that we would probably agree on.

Mandatory Internet connection/tethered usage
Weaksauce system of “programming” cut sequencing (Colors… really? yup)
No absolute positioning, with limit switch/hardstop/endstops
Lid Camera distortion in relation to plotted/drawn placement of tool path vs. actual tool path
Underwhelmingly powered exhaust fan with low priority placed on cleaning or monitoring for soiled condition (Oh, it’s belching smoke? yep, clogged fan)
Can’t use the entire bed space yet…
No functioning adaptive height-sensing focus yet…
(Not aware of…) 2 sided cutting (could use a registration hole cut through near 0,0 to reference on flip. Oh wait Camera alignment of the tool path isn’t dead to rights on yet…)
Awaiting progress on dynamic power control that actually works to prevent edge burn near corners and start/stop regions. Kludge fix: start/stop outside of work piece/in slug area if possible, run lower power/speed overall to reduce burning on corners…
Weirdness about how it handles Fill vs. Stroke paths. You’ve got to set it to Engrave for a stroke IIRC, or was it score…
Weirdness about how the GFUI sequences cuts in a completely nonsensical manner.

If you can look beyond that and accept the fact that this is an expensive toy, and not a production laser, as well as maintain a level of naive optimism it’s not that bad. If you’ve got prior CNC experience and high expectations, it may not be for you unless you’re both patient and cheap.

So my fancy pro got delivered on Tuesday but guess what, no accessory kit. So I have an $8000 paper weight. Waiting on an power cord and hose and piece of steel.

You would think that after all the crap that this company has put their customers through, they would actually read a book on customer service or look at companies like amazon and figure out a better way. So I emailed about the missing package and got a response to that one with oops sorry, I will tell someone to send you one.

Same boat. I picked mine up on Tuesday. I received 2 of 2 packages that were sent according to UPS. The tracking number I have says everything was delivered. I have no box with the power cord or crumb tray. There was no hidden expandable field with my tracking number - and I checked with UPS - there was nothing else shipped.

I’ve tried contacting support but you can’t phone them and their E-mail response time is ridiculously slow (still waiting on a response to an E-mail I sent Monday, let alone the one I sent Tuesday about missing parts)

And like you, I have a really big and really expensive paperweight.

Can’t use the entire bed space yet…

Never gonna. The bed is larger than the head can get to from a physical standpoint. What you don’t have yet but will get is an expansion to the cuttable area on the bed. Right now that’s 19.5"x11" (just shy of 11" but several decimals close). There’s another inch long that we’re supposed to end up getting (20.5") but that’s still in process and is software dependent.

I received 2 of 2 packages that were sent according to UPS.

Yea. I know it’s not right - that’s why I’ve been waiting for Days for Glowforge customer service to respond, because that’s what happened. I received 2 packages and there is no sign of a third.

Do the packages have tracking number on them? Does the GF label say it is one of two?

If so you can tell UPS you are missing part two of the GF shipment. It is a UPS problem. All the packages have barcodes so they should not be able to mix one shipment with another.

They pretty well hide it or make it unavailable on the app and mobile version of their webpage. If you use a desktop to log into your MyChoice, you have the tracking page with different sections, one of which is “Additional Information.”

Mine has since been removed since it was delivered in September, but this section (after being expanded) shows information for Box 1 and Box 2 of the shipments - unless your shipment just happens to be different than everyone else’s.

They pretty well hide it or make it unavailable on the app and mobile version of their webpage. If you use a desktop to log into your MyChoice, you have the tracking page with different sections, one of which is “Additional Information.”

I agree that it should be like that… but it’s not. There is nothing here to suggest that there was a second package with the glowforge (let alone a third) 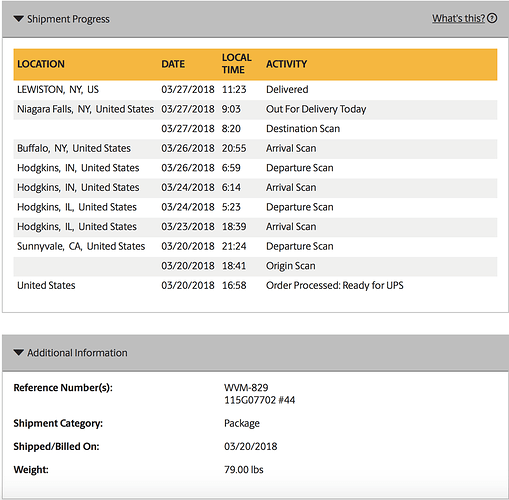 I have now spoken to both the UPS Store that received the package and called the UPS customer service number and both have confirmed that there was only the one package sent and associated with the tracking number.

There is no way to get any information on if the accessory shipment was sent without contact Glowforge and getting a tracking number from them (They didn’t E-mail it) but you can’t call them and their E-mail response time is terrible… so who knows when this will be resolved.

So I got a response with a tracking number for the extra box and it won’t be here until Tuesday. I guess they forgot to ship it. I think they are using Crayons as an order entry system.

I’m sorry your Glowforge didn’t arrive with an Accessory Pack! We’ve sent another out and I’m glad you received our email with the tracking information.

I’m going to close this thread - if the problem reoccurs, go ahead and post a new topic.